We continue our catalogue of crafty Studio One techniques for better bass sounds.

In last month’s Studio One workshop, I showed you five techniques for enhancing bass sounds. This month, I have five more!

Bass is an instrument I don’t play, so I often use sampled or synthesized sounds, at least when I am writing and demoing. One thing that always bothers me about sampled instruments is how difficult it can be to get as much note–to–note tonal variation as one gets with a real player. There are, of course, ways to simulate those differences. 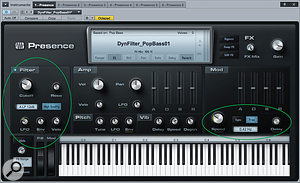 Screen 1: Adding dynamic filtering to a bass sound in Presence. Note the LFO settings circled on the right and the filter modulation settings on the left. Velocity modulation is set to a positive value, while the LFO modulation is set to a negative value.The Presence virtual instrument bundled with Studio One is a nice and easy instrument for such tasks for two main reasons. First, it has a fair assortment of processing on board, including nine filter types and an effects section. Second, it’s not hard to make Sound Sets with your own samples for Presence. Presence also makes a good example because it illustrates that, while a dedicated sampled bass instrument might have extensive facilities for creating variation in the sound, far more modest instruments can still achieve the basic goal.

I like to use Presence’s filter to accomplish this. Many bass samples have a lot of string sound, which certainly provides articulation, but often is just too trebly to sit right in the mix. I set up a simple low–pass filter, in this case a two–pole (12dB–per–octave) filter to take off the edge, then modulate it from two sources for variety. The first modulation source is velocity. Assuming you played the bass part on a controller, there should be different velocity values from note to note, and you want to put this to work. But if you just do this, the same velocity always produces identical tone each time, so to make things fresher I add a little slow LFO modulation.

The critical parameters are the velocity and LFO modulation amounts. Secondary parameters include choosing positive or negative modulation and the LFO rate. I find a touch of resonance in the filter adds a bit more emphasis to the variations. The objective is to find the sweet spot where variation is clearly heard, yet never exceeds believability. When properly done, the effect is subtle but audible, not making a radical difference, but adding veracity.

Gating From The Kick 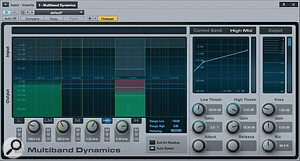 Screen 2: Multi–band dynamics used in parallel can be a smooth way of changing the bass tone. In this example, only two bands are being used, to add low–end warmth and articulation.

It’s easy to do this using Studio One. First, instantiate the Gate plug–in on the bass channel. Click the plus sign in the Sends area of the kick–drum channel to add a new send, and hover the mouse pointer over Sidechains from the pop–up menu. A list of available side–chains appears. Choose the side-chain for the bass channel’s Gate plug–in, and adjust the settings on the Gate to get the best result.

There are many enhancement methods that focus on re–shaping the frequency spectrum of a signal, and no area needs more careful sculpting than the low end. Multi–band compression is a powerful tool that sometimes can be a bit too obvious when used as an insert effect, even if it is effective in bolstering a weak low end or adding articulation. In those situations, I have found parallel multi–band compression can be more subtle. The advantage of parallel compression over EQ is that you can boost a frequency range in a controlled fashion so that existing peaks don’t get exaggerated.

Studio One’s Multiband Dynamics plug–in has an onboard Mix control that makes parallel compression easy. In Screen 2, the low end is being warmed and articulation added. For the lows, everything below 130Hz is compressed with a fairly high threshold and a 2:1 ratio. The settings are intended to avoid severe pumping on the low end. The low–mid region up to 300Hz can be central to the sound of the bass, so take care when compressing that range. In this example, the low band extends all the way up to 320Hz, but, as noted, the compression is not too intense.

Articulation has a lot to do with hearing the strings against the frets, and fingers or pick on the strings. This information resides in the mid–range, but conventional EQ boost here exaggerates fret buzz and other problems. Using a multi–band compressor instead allows us to bring up the articulation without affecting things that are already loud enough in this range. In my setting, this band is squashed a bit more, with a lower threshold and a 3.8:1 ratio; keep in mind that a bass generally has much more energy in the low frequencies than the upper mids, so these settings work out not to sound at all extreme.

Both bands get very healthy make–up gain boosts, around 16dB. The key is in the Mix setting. Note that this is a global control; there are not separate wet/dry mix controls for each band. I have it set to a bit less than 50 percent wet signal. Using parallel compression in this fashion de–emphasises the tonal changes the compressor is creating in the affected bands, while still allowing those bands to be beefed up in the final mix.

Like its close cousin, chorusing, flanging (combining the signal with a slightly delayed version of itself) is a classic effect for bass, but it carries the danger of low–frequency cancellation that can make the bass sound thin. An alternative approach is to just leave the low frequencies out of the flanging part of the conversation. One way that could be accomplished would be band–splitting. The signal is sent to two channels, one with a high–pass filter and a flanger, and the other with just a low–pass filter.

That can work fine, but once bands have been split, it can be tricky to stitch them back together again. So I take an alternate approach to the alternate approach, shown in Screen 3. I send the bass signal to an auxiliary channel with a high–pass filter and a flanger inserted. The flanger’s mix set to be entirely wet (processed) signal. This channel is summed with the original into a bass submix. The result is a flange that can be subtle or blatant, but leaves a nice, fat bottom on the signal. A few tips: 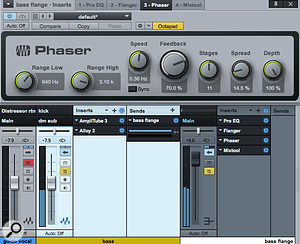 Screen 3: Flanging on bass often works best if it’s applied only to the mid and high frequencies. Here, the ProEQ plug–in is applying a high–pass filter to the signal. Note the range settings on the Phaser, as well as the low Spread value.

We’ve all been handed ‘blobby’ bass tracks to mix. Blobby bass is an unfortunate condition in which the bass sound has very little in the way of upper-mid–range frequencies, making it easy to for the instrument’s notes to disappear in the mix. Articulation can be improved with more high–mid–range energy, but there is often not enough high–mid energy in the signal for EQ to bring out effectively. An alternative is to synthesize new upper–mid harmonics, either using an enhancer plug–in or filtered distortion. 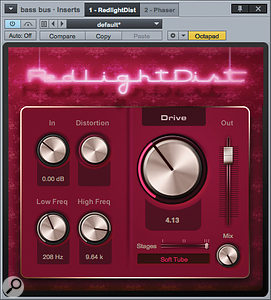 Screen 4: The Low Freq setting acts as a high–pass filter on this relatively genteel distortion sound. The plug–in is inserted on a bus channel and then mixed in with the original.

To do the latter set up a pre–fader send from the bass channel to a bus channel, and insert the RedLightDist plug–in on the bus channel. Important settings to note are the choice of SoftTube distortion, so the sound won’t distort into fuzz, and Low Freq set all the way up at 200Hz, so that deep bass is not affected. Drive is set at a moderate level of around 4. (Yes, the Drive control goes to 11.) I inserted the Phaser plug–in after RedLightDist to create some variation. Now slowly mix the signal in with the unprocessed bass sound until you gain definition on the notes without losing the fundamental character of the sound.

OK, that makes 10 ways to enhance bass sounds using Studio One’s facilities. Next month we will move on.