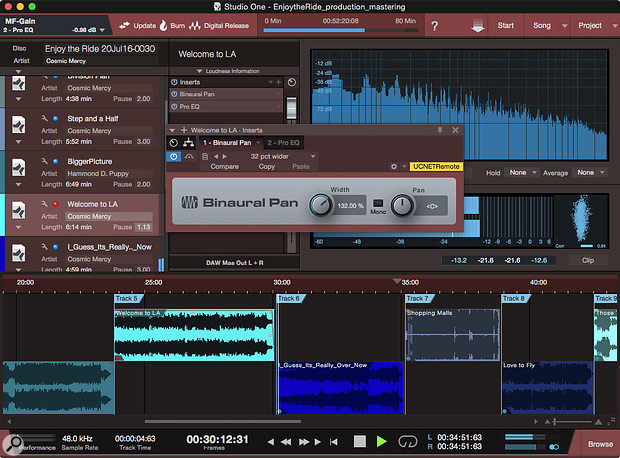 The Project page can be used as a laboratory in which an album can be refined by matching songs to references. Here, ‘Welcome To LA’ is being widened to work best with the stereo width of other tracks. Note that EQ has also been applied to this track. The image widening created here with the Mid-Sides-based Binaural Pan plug-in may end up getting replaced in the mix by panning or image widening of individual instruments.

The rise of DAWs has eroded the division between the traditionally separate production phases of recording, overdubbing, editing and mixing. People now start mixing as soon as the second track is laid; and Studio One’s Project page creates the equivalent transformation at the other end of the process, breaking down the division between mixing and mastering, which traditionally has been thought of as a post-production process. The reality is that many projects simply have no budget for mastering, while the tools to do a credible mastering job at home are now easily affordable, leaving open mostly the really big question of skill: whether you can apply the tools appropriately.

There are limits to what can be done in mastering, however, and it is not unusual for a mastering engineer to request mix revisions by the mixing engineer rather than trying to treat issues less effectively in mastering. The integration of Studio One’s Project and Song pages facilitates exactly these sorts of revisions, and, in fact, encourages doing so as an iterative process I will call ‘integrated mastering’. The basic idea is to prototype changes on the Project page that get more carefully and comprehensively implemented on the Song page. I have very successfully used this technique on a few recent projects, and the whole system falls neatly into seven steps, which I impart to you this month. 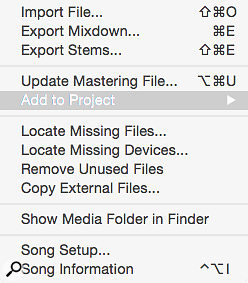 The Song menu enables you to add a Song document to a Project, or to update the mix in a Project when you’ve made changes to it.

Once the songs are imported, drag the songs in the track column to arrange them in a sequence you think will work well. Evaluating and refining this song order will be one of many tasks encompassed by integrated mastering.

The basis of integrated mastering is making comparisons between tracks, so you need to establish references to serve as points of comparison. An obvious place to start is the overall perceived level. First, identify the loudest moment on the album. If the level is not already pretty much at the top of the available dynamic range at that moment, raise the track fader until it is. This is now your track level reference.

Next, identify the loudest moment in each of the other tracks. For each track, jump back and forth between the reference and the track’s loudest moment, adjusting the level of the track until it sits well against the reference. Also compare each track to those already adjusted, making adjustments as needed to any of the tracks to get them all fitting together well. Use the track fader for these adjustments, as this makes it easy to remove the adjustments later.

Ideally, one could drop markers at the loudest moments and jump quickly between them. Unfortunately, there are no positional markers on the Project page, only track and index markers, so to start playback mid-song, you’ll need to click in the timeline as close as possible to the target moment.

I usually make a worksheet for each iteration where I record my judgments about needed adjustments. This worksheet is from a first round. I’ve established the songs that make the best starting reference for each attribute (coloured green and marked ‘0’), set channel faders for a decent level match, and made most of my notes about relative drum levels in the tracks. There is still much to do here!

Once step 2 is done, the tracks will be in the ballpark in terms of overall mix level. But there are many more attributes to consider, and you will want to apply the same basic process for adjusting those attributes. For each attribute, find the song that comes closest to how you want the album to sound and document it. Without going into a tutorial on mastering, here are a few things to listen for and compare:

The idea now is to apply the same diagnosis-and-treatment procedure used for rough level setting to other attributes, but that’s not as simple as with levels. The listening part is similar: for each attribute, compare parts of each song to the reference and notice what is different. But making adjustments to bring the mixes closer to each other is harder. Some attributes, like the levels of individual sources, can’t really be adjusted on the Project page.

Image width and mix tonality, to name two other attributes, can be adjusted to a good degree using plug-ins. To match mix tonalities, for example, you could introduce a flexible EQ on an individual track and adjust it to bring the track closer to the sound of the reference. Similarly, stereo imaging plug-ins can help in matching mix widths. If a song has internal level issues, automation can be used to correct them, but this takes time to undo later.

This part of the process requires very close listening and a high degree of concentration. It is also a good time to start paying attention to metering, including spectrum and loudness meters. For attributes you can work with in the Project page, save as presets the settings of the plug-ins you use for matching. For attributes you cannot work with in that environment, make detailed notes of the differences you hear.

Unfortunately, implementing the changes you identified in Step 4 is often not straightforward. The objective of going back to the mix is to be able to alter individual elements. Thus, a 4dB dip at 300Hz you made on the Project page might, after muting various instruments to isolate the source of the low-mid flab, actually translate to a 6dB dip at 180Hz on the bass plus a 4dB cut at 320Hz on the acoustic guitar. It is this part of the process — implementing changes on individual channels to obtain the desired overall effect — that requires the most ear training, technical understanding and intuition. It also yields the most profound of integrated mastering’s benefits. Nail this skill and not only will your album sound better, but your powers of sonic discrimination will be greatly strengthened.

Some adjustments will be easy. You might increase the level of a mix by adding compression on the drums or the mix bus... or you might just need to raise the master fader a few dB. Some changes require only instantiating the same plug-in you used on the Project page and loading the preset you saved. A typical project has a mix of easy and not-so-easy changes.

Once you finish your adjustments, save a new version, identified by date and time, to which you can always fall back, if need be.

Once you’ve made changes to a Song, return to the Project page. A dialogue will ask if you want to update the mix for the song you were just working on. Click OK and a new mix is generated, replacing the old mix in the Project page. Be sure to bypass or disable all plug-ins on the channel and return the fader to 0dB. Fail to do this and you will double-process the mix, so don’t forget. If you did any track automation, be sure to remove that, too.

By the third or fourth iteration, your process should be close to finished and things should be stabilising. I rarely need to touch a track fader by the time I do a fourth iteration. After an iteration or two, it’s comfortable to make changes on several (or even all) songs before returning to the Project page and updating. 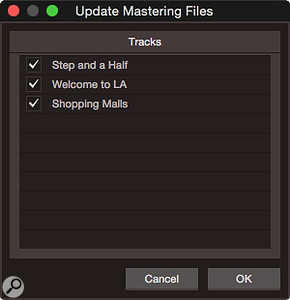 The Update Mastering Files dialogue appears as soon as a Project is opened if any of the Songs in the Project have been changed since the Project was last updated. Updating can take a bit of time if you have changed a lot of Songs.

I usually add a little master bus processing around the second or third iteration. Project-based master-bus processing is best added late in the process, because you are trying to get the mixes as close as possible in the Song page environment. However, it is perfectly reasonable to want, at the very least, a brickwall limiter on the master bus to avoid clipping, and that is often all I do end up with.

Occasionally, I have added other processing (tonal, dynamic, spatial) earlier in the process, then gone back and successfully replicated those sounds in the individual mixes, leaving only the brickwall limiter on the master bus in the end.

Performed carefully and sensitively, integrated mastering can, at the very least, improve consistency across the mixes on an album, and, in the best case, eliminate the need for a separate mastering phase.