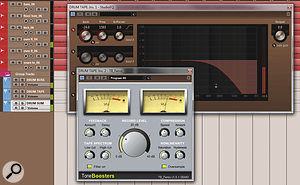 Here, a tape-emulation effect has been set up as a send effect from the drum bus. With the high end rolled off, this can add solidity to the bottom end and mid-range of drums, leaving a more natural, airy sound from the cymbals.

We've discussed the difference between inserts and send effects many times in these pages, but for the newbies, let's spell it out: an insert slot is typically used for processors that change the whole signal — things like compression, gating, limiting and EQ, which can alter the character of the audio on the track — whereas send effects are typically used to add effects to a signal, such as by introducing delay lines or reverberation, while leaving the sound of the original track unaffected: you decide how much of the effect you want, using either the source track's send-level controls, or the faders of the effect 'return' channels ('FX' channels, in Cubase). I say 'typically', because you can, of course, break these 'rules' — and that's the subject of this month's column.

Before I get into any techniques, I should say that I'm not sure why Cubase has both FX and Group channels. You can send to a Group just as you can an FX channel, but Groups also seem slightly more flexible in terms of routing. For that reason, I often use Group channels in place of FX channels.

I tend not to use reverbs and delays as inserts, because (a) they're generally relatively CPU‑intensive effects — so it makes sense for multiple channels to share the same instance of a plug‑in — and (b) I often want multiple source channels to share the same virtual 'space'. I occasionally use reverb as an insert to add a bit of body to a thin sound, using an ambience-only patch, before running the whole signal through a processor — but that's about it. I do, on the other hand, often find myself using and abusing Cubase's FX and Group channels, sending individual source tracks to processors for a variety of reasons...

Parallel compression is a common 'send trick', and we touched on this in SOS April 2009's Cubase column (/sos/apr09/articles/cubasetech_0409.htm). The idea is that you put a compressor on a Group channel and send a signal to it. You route both the source and compressed channels to another Group, and balance the processed and unprocessed signals to taste. The aim is the sort of increased tightness or 'focus' that you'd expect from standard compression, while still letting some of the dynamics of the original through. Some plug-ins (not the native Cubase ones, though) provide a wet/dry control, which in essence achieves the same thing, but these offer you less flexibility than genuine parallel compression, as when using sends you can process the original and compressed signals differently — for example, by applying EQ. Adding a subtle 'smile EQ' before mixing the two signals back together can yield a pleasing sound, and high and low-pass filters are particularly useful. For example, I sometimes use a similar technique on a drum bus, but substituting the compressor with a tape‑emulation plug-in. I'm able to decide which frequencies go to tape: I can leave the cymbals nice and open, but get the desired solidity by low-pass filtering before the tape effect somewhere around or below the 4-5kHz region.

Gates can also be used in combination with more conventional send treatments to create interesting spot effects. For example, a lead vocal or guitar part might be sent to a gate so that only the loudest notes are allowed through, and this signal can then feed a delay line. 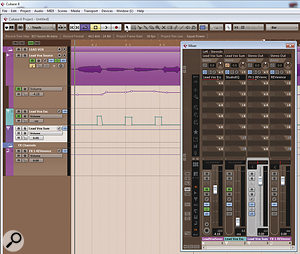 Sending to a Group channel to create a vocal de-esser. Note the automation singling out the offending 'esses', and the orange polarity-invert button on the dedicated 'ess' track, which causes the desired ess-cancellation.

A reasonably good-sounding de-esser plug-in comes with Cubase, but it offers little controllability — so if you need greater precision, try this trick.

You'll often read about a technique known as 'multing' in the pages of SOS, particularly in Mix Rescue. This is where you duplicate a track so you can apply different treatments to the two parts in different sections of the song, without having to resort to detailed automation. You can achieve much the same thing as discussed above in this way, editing the waveform to leave only the esses, rather than using automation. However, that leaves you having to revisit your esses every time you make further edits or processing tweaks to the source channel — whereas using a send dynamically links the two parts.

Cutting Through The Mix 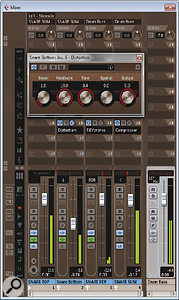 Automating the send level of a snare to a distortion processor can help the snare to cut through at critical points in the mix.

I often use distortion or a harmonic enhancer as a send effect. Most enhancers, such as the Aphex Aural Exciter, for example, work at least in part by adding harmonics that are related to the source signal, and blending them back in with the source, making it appear brighter or fuller. By placing the enhancer on an FX channel, you can route the full signal to it, and then filter out the unwanted frequencies — just as I described with the tape effect.

Overdrives, distortion processors and guitar amp and cab emulations also introduce harmonics, but they can be seriously unsubtle and produce some nasty side‑effects if applied to whole sources, such as vocals or snare drums. Even on sources more usually associated with distortion, like electric bass and guitar, they'll fundamentally change the sound character, and that's not always what you want. Using these as sends, though, you can be more subtle.

In a recent mix, for example, the snare drum was just as I wanted it for most of the track. The later choruses and outro, though, were very busy, with more elements piled into the mix, and the snare was struggling to be heard. I set up a Group channel, routed the snare to it, and dialled in some distortion using Cubase's bundled 'Distortion' plug-in, before rolling off the bottom end of the distorted signal. That left me with a snare 'presence' fader that I could ride up and down during those sections to get the snare to cut through. Of course, I also used automation to mute the distortion channel in other parts of the song. The same technique — without the automation — can also be used to fake an under-snare mic (maybe you had insufficient inputs on the session, for example), to give you a lot more control over the snare tone.

You might also use this 'send-multing' approach to layer and sculpt sounds. Let's continue with the snare example again, but this time you want more body and less 'snap', and EQ alone isn't cutting the mustard. One possibility would be to send the snare to a Group channel and then insert Cubase's Enveloper (or, better still, a third-party transient‑design plug‑in) to roll off the attack portion of the snare. You can then add a distortion effect, a compressor or limiter and maybe some EQ to sculpt this sustain section of the snare. Finally, bring up the Group's fader to mix the original and the duplicate. You could even set the output of the original to 'No Buss' but send it to two different Groups, one to control the attack and the other the sustain. You can achieve much more precise control over the results of Cubase's Enveloper in this way.

If you're new to either Cubase or the mixing game more generally, I'd strongly recommend that you start out by learning to use inserts and send effects in a 'conventional' way, as described at the beginning of this article. It remains a good rule of thumb to follow. But as you become more adept at using your processors, you'll find there are definite benefits to experimentation with those send effects, whether for tonal shaping or for problem solving.