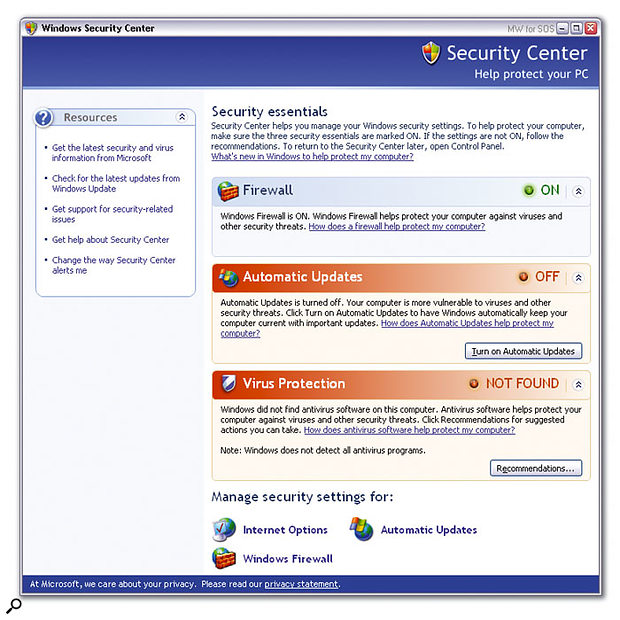 The most obvious outward sign that you've installed Microsoft's Service Pack 2 for Windows XP is the new Security Center (sic). You should install SP2 on any PC connected to the Internet, but there are some caveats (see main text).

The Windows XP Service Pack 2 is out, and it offers valuable bug fixes as well as enhanced Internet security measures. But as reports of a few audio-related problems surface, should musicians go ahead and install it?

Back in PC Notes March 2004, I mentioned that Microsoft had released a Beta version of the Windows XP SP2 (Service Pack 2) to their registered Beta testers. As I write this, the final version is available in its full-blown IT Professional and Developers version — although, at 266MB, it won't be a popular download for those with 56k modems.

Fortunately, by the time you read this, in mid-October, those updating single PCs running Windows XP Home, Professional, Media Center Edition, or the Tablet PC version will instead be able to download a much smaller and specific consumer update file of around 120MB from the Windows Update pages (http://windowsupdate.microsoft.com). I also expect that by then most mainstream PC magazines will be including it amongst the freebies on their cover-mounted CD-ROMs. More remarkable is that Microsoft themselves are apparently going to offer a totally free CD-ROM version to anyone who requests it.

So, remembering some of the problems that musicians have had in the past after installing DirectX updates, what does the Windows XP SP2 update contain that's actually of interest to musicians, and is it worth your while installing it? Well, SP2 includes a host of tweaks and bug fixes (if you would like to, you can read the full list at http://support.microsoft.com/default.aspx?scid=kb;EN-US;811113), but anyone who has followed a fraction of the press stories will understand why its main preoccupation is with extra Internet security — Microsoft themselves describe SP2 as offering 'changes to network protection, memory protection, email handling, and enhanced browser security.'

It includes a new Windows firewall that is activated by default (those already running alternative personal firewall utilities such as Zone Alarm should therefore disable them). Outlook Express and Windows Messenger have also been updated to identify and isolate malicious file attachments as they are being opened, while Windows Explorer has been updated to prevent pop-up adverts and unwanted downloads occurring. Many users have also noticed that their browsing experience feels considerably more responsive.

However, while anyone with Internet access will, of course, be most interested in these features, SOS readers running music-only Windows XP partitions won't yet find anything of much interest. Support for Bluetooth and Wi-Fi wireless networking has been improved, and there's a new version 9.0c of the DirectX graphics components, but once again neither of these will specifically benefit musicians. However, the general feeling among those musicians who have already decided to take the plunge is, fortunately, good, with several commenting on various music applications, including Kontakt and Reason, being launched far more quickly than before, with shorter loading times for large patches within them as well. Those running several music PCs networked together have also commented on more streamlined performance.

Unfortunately, some music-specific problems have also surfaced at the same time. In improving "compatibility, stability and data integrity," Microsoft's updated Firewire drivers now cause problems for many Firewire 800 (IEEE 1394b) devices. Matthias Carstens of RME was among the first to post about problems with their Fireface 800 audio interface, which was reduced from its normal transfer mode of 800Mbits/second down to the slowest available mode of just 100Mbits/second, but it's apparently a problem that affects all Firewire 800 devices (although Firewire 400/IEEE 1394a devices survive intact at their normal 400Mbits/second). RME have written a firmware upgrade that cures the problem for the Fireface 800 and other manufacturers are following suit, including Lacie for their FW800 range of external hard drives.

Steinberg have already announced that while Cubase SX, Nuendo and HALion don't benefit from SP2 in any way, there are no problems with it being installed. However, among the extra security features of Service Pack 2 is one called DEP (Data Execution Prevention) that attempts to stop a potential virus running in data memory. Unfortunately, as some of its users have already found, the Sonar mixing engine uses some self-generating/modifying code that can cause Windows to stop execution of the code and warn about a possible security problem. Fortunately, it's fairly easy to add Sonar to the list of specific applications that ignore DEP (see the Cakewalk web site at www.cakewalk.com for details).

You may also find a few other applications that behave differently or stop working correctly after installing SP2 — Microsoft even provide Knowledge Base articles 884130 and 842242, each containing a list of known applications with such problems. If you're thinking of taking the plunge, do check through these lists first. Nero Burning ROM and Nero 6 Ultra are both affected, as is AOL 9.0, Pinnacle's Studio 9 and Instant CD/DVD 7, plenty of games, various firewalls and virus checkers, and even a selection of Microsoft's own applications, including Office and Word XP.

Some users have reported greatly increased use of RAM with SP2, compared to SP1, presumably to run the extra security features, with the result that a PC with 512MB of RAM ran more slowly, although I didn't notice any increase in RAM use on my 1GB PC. Given the huge complexity and depth of this major update, it's perhaps not surprising that Microsoft have also already released several 'Hot Fixes' to solve a few issues (although not too many users will be affected and need to download them).

As I write this, a few PC users with Intel Prescott processors seem to have run into problems with their machines not being able to boot up at all following the SP2 update (few musicians are currently using this range, due to its high power dissipation and therefore potentially noisier cooling requirements). I've no doubt that this bug (if confirmed as such by Microsoft) will be speedily resolved, but it shows how careful you should be before making major changes to any computer's operating system.

Anyone whose PC is connected to the Internet would probably do well to install SP2. However, many people with music-only PCs have already decided that it isn't really worth the risk of installing SP2 if their PC is already willing and stable when running audio applications. I normally agree with this 'if it ain't broke, don't fix it' approach.

Nevertheless, SP2 does update a huge number of core system files with recompiled and improved versions, and incorporates all the Hot Fix updates released since SP1, including six that directly affect audio matters. SP2 also contains all the fixes that were included within the previous Service Pack 1. So, for those of you installing Windows XP from scratch, running SP2 straight afterwards will ensure that you've got every fix and the most up-to-date versions of every file, all in one clean hit. However, anyone who currently has problems with a PC running Windows XP and Service pack 1 shouldn't expect SP2 to be a cure-all — it's far better to attempt to solve any issues you have before you apply the update.

Overall, judging by the information I've gathered from the mainstream and music communities, I feel SP2 gets a cautious thumbs-up, as long as you first check that you don't have applications in the list of those affected (although there are likely to be various others that Microsoft and its allies haven't yet checked). If you do have affected applications, visit the web sites of their manufacturers to see what the problems are, and whether fixes have already been released. If not, you'll either need to wait for them before installing SP2, or switch to another application.

The Proof Of The Pudding

On my P4 2.8GHz PC it took just 14 minutes for the SP2 update to inspect my current configuration, archive my current files, and then update them. It's encouraging to note that Microsoft automatically backs up older versions of all system files during the update, but I would also advise you to create an image file of your current Windows partition, so that you can be sure of being able to backtrack totally if you run into any problems with your particular mix of software.

The only obvious difference next boot was that the animated progress bar was now blue rather than green, and a warning screen appeared advising me to re-enable Automatic Updates (I declined, since I prefer to decide for myself). Then the new Windows Security Center (sic) popped up, letting me easily disable the new firewall measures on my music-only partition (see screenshot on previous page). I also spotted two new Applets in Control Panel for the Windows Firewall and Wireless Network Setup Wizard.

Like a huge number of other updaters, I haven't personally come across any compatibility problems with my mix of applications (so far, anyway), and since I also have an image file saved, just in case, I've also deleted SP2's archive folder containing the older versions of system files, which in my case reclaimed 345MB of disk space. I haven't measured any direct performance benefits yet, but that doesn't mean I won't notice them in due course.