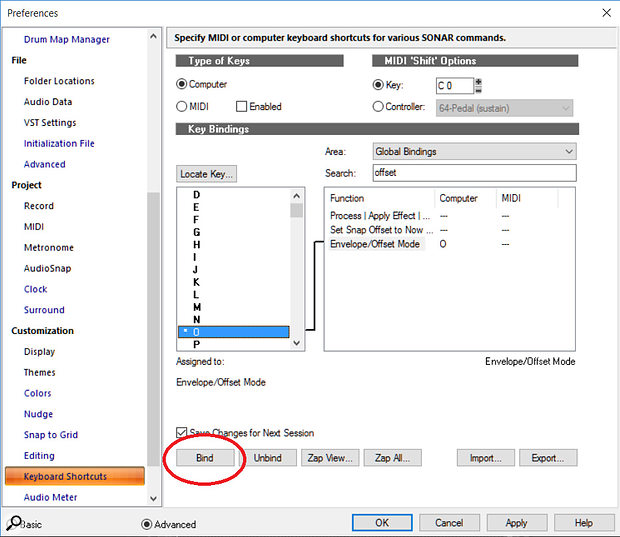 Streamline your use of Sonar’s automation with these time-saving tips.

Automation is an important part of any DAW — but if you don’t know some shortcuts, editing it can be tedious and sometimes even frustrating. So, let’s consider several tips that streamline the process of using Sonar’s automation.

There seems to be quite a bit of confusion surrounding the use of Offset mode instead of standard automation. If you forget you’re in Offset mode, or enter Offset mode unknowingly, it can really screw up your automation. As a result, many people avoid using Offset mode altogether. However it’s an extremely useful option, so it’s important to understand the purpose and uses of Offset mode so you can take full advantage of it.

The keyboard shortcut ‘O’ used to be the default for selecting Offset mode. However, people would sometimes type ‘O’ accidentally when naming something, go into Offset mode without knowing it, and freak out. So a while ago, Cakewalk removed the default Offset mode shortcut, but I highly recommend re-establishing that keyboard binding. To get the most out of Offset mode, it’s essential to be able to switch back and forth rapidly between it and standard automation.

However, if you want to offset the actual automation envelope as it appears in track view (not just add a virtual offset in Offset mode), there’s a way to do that too:

1. Select the Smart Tool and the track with the automation you want to edit.

2. Set the track’s Edit Filter to Automation, then choose the automated parameter you want to offset (we’ll assume for now that automation lanes are hidden and we’re working on the clip itself).

3. Drag the Smart Tool across the section of automation you want to offset in the track itself (or, because the track should still be selected, you can also drag across the timeline to select the automation).

4. Hover the Smart Tool over a clip handle, or over an empty space in the track on the same horizontal plane as the clip handle. The cursor turns into a line with up and down arrows, called the Trim Cursor.

You can also offset multiple envelopes by the same amount: select any of the existing track automation in the Edit Filter, then unfold any automation lanes you want to offset and follow the same procedure as above. With multiple envelopes, you’ll probably find that dragging in the timeline will be the fastest way to select a region of automation. Note that if automation exists in a lane that is not unfolded, it won’t be edited.

You can also edit automation in individual automation lanes. Select the automation in only that lane, hover the cursor just below the top of the lane until it appears as the offset cursor, then drag up or down as described previously.

The Piano Roll view is controller-friendly if you’re not using a lot of controllers, but with more than a few of them, the strips are so short that editing becomes difficult. Fortunately, you can convert MIDI controllers to automation envelopes in MIDI tracks, and edit them as you would audio automation. Doing so also lets you take advantage of editing options like being able to alter curve shapes, or use the Draw tool to create periodic waveforms — sort of like an automation LFO.

1. In the track view, select the clip and region containing the controller to be converted.

3. In the Convert MIDI to Shapes dialogue box, choose the controller to be converted to an envelope, then click OK.

4. You can continue choosing controllers using the above procedure.

If you open up the automation lanes, you’ll now see that your control data has been converted to envelopes; if you close the lanes, you’ll see the envelopes superimposed on the clip itself.

However, there is a pitfall. This is a one-way street; once you’ve converted a Piano Roll View MIDI controller to an envelope, you can’t convert it back again to a controller that appears in the PRV.

You now have two lanes for different controllers with the same data. Then if desired, you can convert these to Track View envelopes using the procedure described earlier.

A lot of users dutifully click to create nodes in a clip automation envelope, then start moving levels around. But there’s a much easier way to edit clip automation to change gain for a specific region, whether you’re using the Move Tool or Smart Tool.

The region where the clip gain will be reduced has been selected with the Move tool; dragging downward reduces the gain. Note the tooltip that shows by how much the gain has been reduced.

For the Move Tool, set the Edit Filter to Clip Automation / Gain, then select a track. Drag across the timeline to select a region whose gain will be changed in the selected track, then click on the clip’s handle anywhere in the region to be edited, hold the mouse button down, and drag up or down to change Gain.

For the Smart Tool, again set the Edit Filter to Clip Automation / Gain, then select a track and drag across the waveform in the clip to select the region to be edited. Move the cursor to just below the upper part of the Clip until the cursor changes to the Trim cursor, and drag up or down.

Often, you’ll want to switch back and forth between a clip and its associated automation; fortunately, there’s an easy to do this.

Hover the cursor over the Edit Filter, and you’ll see the unabbreviated version of the automation parameter’s name.

One thing to be aware of is that the Edit Filter truncates long automation parameter names, and the abbreviations may leave you scratching your head as to what is really selected. Fortunately, there’s a simple solution: Hover your mouse over the Edit Filter label, and you’ll see a readout of the full name. Much easier, eh?