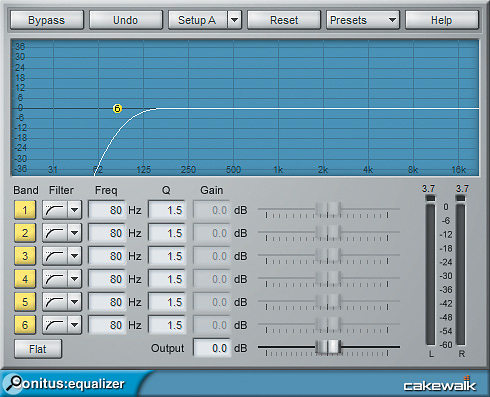 Here, the Sonitus EQ is set up as a pop filter using multiple stacked high-pass curves.

Get acquainted with Sonar’s many EQ options.

Sonar offers multiple equalisers. The Artist version includes the Sonitus EQ and Para-Q two-stage parametric; Sonar Professional adds the LP-64 linear phase EQ, the four different EQ curves in the ProChannel QuadCurve EQ, and six EQs in the Blue Tubes ‘Studio Mixing’ suite (as well as the EQ in the Blue Tubes Analog Trackbox); Sonar Platinum adds useful EQs in the VX-64 vocal and PX-64 percussion processors, as well as a ‘flyout’ QuadCurve EQ interface with spectrum analyser. Even experienced Sonar users can be overwhelmed by all these choices, so let’s investigate the main types.

Evaluating EQs using individual tracks or programme material is essential, but feeding in a noise source makes it easier to learn quickly about an EQ’s character and response. As you edit EQ parameters, it’s easy to hear how various settings influence the sound.

Sonar has a convenient noise source: insert the Sonitus Surround plug-in into a track’s FX Rack, turn the Test Noise button on, and place your EQs after the noise generator. When checking out the ProChannel EQ, right-click on a ProChannel module header or on a blank space in the ProChannel, and select Post FX Rack.

You can also copy one stage’s parameters to another stage, by right-clicking on the band number to copy/paste to or from any other band (or all bands).

The interface offers a few other handy tricks: if you right-click within the graph you can change its resolution to ±5, ±10, ±20 or ±40 dB (the ±5dB range is excellent for making subtle adjustments).

The effect header offers a compare function via two different lots of settings, and you can switch easily between them (as well as copy one setup to the other so you can compare small variations).

There are also several reset functions. ‘Flat’ sets boost/cut to 0 but retains all other settings. Right-clicking on a band number gives the option to reset only that band to its default, while the effect header’s ‘Reset’ button chooses the EQ’s default settings.

Ctrl+clicking on the yellow filter markers (or drawing a marquee around them) lets you move several bands simultaneously while maintaining a ratiometric frequency relationship. For example if Band 1 is set to 500Hz and Band 2 is 2000Hz, then when you select both and move Band 1 to 100Hz, Band 2 will be at 400Hz. With a frequency band marker selected, holding Shift and dragging left or right (or varying the mouse scroll wheel) adjusts its Q.

The Sonitus EQ has only one algorithm, a ‘digital’ EQ curve — there’s no attempt to duplicate the anomalies of analogue EQs. Although you can wrestle it into being more of a ‘character’ EQ, the QuadCurve is better for that application. I use the Sonitus EQ primarily as a quick, easy solution for problem-solving (such as getting rid of an unwanted resonance), and as a Clip effect. Because of the low CPU consumption, it’s also useful in effects chains that require a lot of frequency response tailoring, like notching out ‘fizzy’ frequencies with guitar amp sims.

Most traditional digital equalisers use IIR (Infinite Impulse Response) filters, which introduce phase shifts when splitting and re-combining individual stages. The LP-64 uses FFT-based filtering to achieve a linear phase response, with the trade-off being higher CPU consumption. It also has a lookahead function so it can turn down gain automatically at peaks that would otherwise cause distortion. Because of these two factors, the LP-64 is best-suited for the master bus and mastering.

However, the LP-64 is a top-drawer equaliser with numerous useful features for individual tracks. If the CPU consumption gets excessive simply copy the track, render it with the EQ settings, then archive the original track in case you decide to re-edit the EQ later. Here are some of the LP-64’s more interesting features.

You can add up to 18 parametric stages in between the right and left frequency markers (which are always dedicated to high and low shelf respectively — if you add a stage to the right of the right-most stage, then what you add assumes the high-shelf identity). For mastering, where you often need to add multiple EQ tweaks, this is great. This kind of precision makes it possible to ‘pseudo-remix’ drums by dialing in specific drum frequencies and tweaking their levels.

The background graph calibration is continuously variable from ±6 to ±24 dB, and you can enable a numeric display that shows any combination of frequency, gain and Q for all stages, as well as allowing you to enter precise numeric values.

Curve and Normal modes offer different ways of editing. Normal mode provides a standard view of parametric EQ parameters; Curve is more about editing using the response curve as a ‘rubber band’ for dragging around points along the curve to create the desired shape. However, Curve mode does not allow for adjusting Q; you need to add more points to sharpen the Q.

In either mode, dragging a stage’s marker below the maximum amount of cut gives infinite cut.

Ahead Of The Curve

You’ll often see posts in pro-audio forums from people who like the sound of one EQ more than another. This can be due to a variety of factors, like whether an EQ is trying to emulate a specific analogue characteristic, but it can also relate to the type of EQ curve chosen by the plug-in manufacturer.

Analogue EQ design involves multiple trade-offs, and these help contribute to an EQ’s character. For example, sometimes you’d choose a constant-Q design over a non-constant-Q design, depending on what you’re EQ’ing, or maybe you’d trade off a steeper slope for more pass-band ripple. We don’t need to cover the technical details — suffice it to say a digital EQ that emulates one particular type of analogue EQ curve is indeed going to sound ‘different’ compared to a digital EQ that emulates a different analogue EQ curve. That doesn’t mean a particular EQ plug-in is inherently better, but it could be better for a specific application.

The QuadCurve offers a choice of four different algorithms (outlined in red).

The QuadCurve’s four different curves make it my go-to EQ for most purposes, not just because of the ‘clean’ sound but because it’s easy to choose an appropriate curve rather than try to create one in the LP-64 or Sonitus EQ. However, choosing the right curve means understanding how each curve affects the sound (just clicking the different options and picking the one that ‘sounds best’ isn’t exactly a strategy), which is why I recommend spending some time auditioning each EQ curve.

Sonar’s help document describes the technical differences among the various EQs, as well as subjective impressions and descriptions, so we needn’t repeat that material here. However, to give meaning to these descriptions, feed some noise through the settings shown in the screenshot, then try the different curves and listen to what happens as you change the various parameters. You’ll hear that the Hybrid’s cut is much sharper than the other curves, while the boost is fairly moderate — this would be the EQ to use on drums if you wanted to tame a resonance but also boost a wider range of frequencies.

The VX-64 and PX-64 channel strips both include dedicated EQ sections.

The Pure type is broad and gentle, very much like Pultec emulations (in many cases this curve will do what you need without changing a sound’s inherent character), while the E-Type sort of ‘splits the difference’ between the Hybrid and Pure types. The G-Type resembles the Pure’s characteristics, but with a broader cut and narrower boost.

Tweak the controls while listening to noise, and you’ll really hear how these curves affect the sound — which will help you choose the right curve for the right job.

Finally, don’t ignore the ‘character’ EQ options designed for drums (the PX-64) and voice (VX-64) in these Platinum-only plug-ins. You may still need additional EQ, but these will provide a good starting point.