Last issue, we covered methods for recording a solo artist. Now it's time for editing and comping.

In the first part of this workshop, I covered using Sonar to record a solo performer, using my recent sessions with classical soloists (on guitar and harpsichord) as examples to illustrate how Sonar can help to make a session more pleasant and efficient. At the end of the last instalment, we had some lengthy recorded tracks, comprising multiple takes, and with the 'dead space' between takes deleted. However, even if you cut out most of the sections between takes, it will be difficult to view an entire project on even a dual‑monitor setup and still have decent resolution. As a result, you'll end up going back and forth between takes a lot, so you'll need a way to identify the take you're working on as quickly as possible. Sonar's colouring and marker functions are helpful for this.

First, we need to re‑split the long files into the takes we plan to use; last month's article described the process of splitting files in detail, but the short form is to place the Now time between takes, select all tracks (Ctrl‑A), and type 'S' to create a split. Now each take is a set of clips on multiple tracks. To colour these, select the clips in a take (drag a rectangular marquee around them), then right‑click on the take clip(s) and select Clip Properties. In the General tab, click on Background Color / Choose Color. Choose a colour from the colour picker, click on Add to Custom Colors, then click on OK. All clips in the take will now acquire this colour. 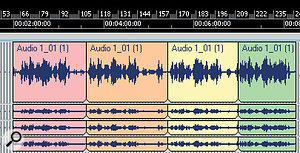 The files have been split into takes, and each take has its own distinctive colour. I colour the takes going from left to right, using the order of the colour spectrum (red, orange, yellow, green, blue, indigo, violet). That way I always know that, for example, the green take happened after the yellow take.

Now comes the hard part: comparing like sections of each take to determine which section is best. You can then combine all the best bits into a composite file. This is like assembling a composite vocal, but involves multiple tracks of clips recorded at different times, so standard composite-recording techniques aren't applicable.

There are two ways to simplify the comparison process. For this first method, it's necessary to move the clips.

1. To get started, place a marker at the exact beginning of each take.

Markers have been placed at the precise beginning of each take.

2. Go to the first marker and listen to a portion of the take.

3. Go to the next marker and listen to that take. There are two easy ways to jump to specific markers. One is keyboard commands (Ctrl‑Shift‑PageUp for previous marker, Ctrl‑Shift‑PageDown for next marker). The other is going Views / Markers, and clicking on a marker in the list.

4. Continue jumping between markers and listening until you decide which take has the best section, and note where this good section ends (for example, where there's a mistake that means you'll want to use a different take for the next section).

5. Copy the best section, and start to build a composite take to the right of the existing takes. There are two ways to do this. One is to split the take at the beginning and end of the desired section, then Ctrl‑drag it to the new take. Another is to Alt‑drag across the section in the timeline, and type Ctrl‑C to copy this section. Then click where you want to build the new take, and paste this section.

6. Now it's time to audition the next part of each take. Select all clips and move the entire collection to the left until the first marker is above the next section you want to audition. Assuming that the takes were played at a relatively similar tempo, subsequent markers will fall at the next section to be auditioned in the various takes.

The takes have been moved as a group to the left, so that the markers indicate a new section of the different takes. It's easy to jump between sections to audition them.

7. Repeat steps 2‑5 to determine the next section to use in the composite take. Then select all the clips and, again, move them to the left until the markers fall over the next section to be auditioned. Continue until you've built up a new take from the best sections of the other takes.

When building the new take, enable Snap to Grid but un‑tick everything except 'Multi‑Track Landmark' and 'Audio Clips'. With this Snap to Grid option, the beginning of a clip will snap smartly to the end of the previous clip. However, when you're doing fine edits you probably don't want Snap to Grid enabled, but typing 'N' toggles Snap to Grid on and off (those who have the Cakewalk VS700C controller can do the same thing with the dedicated Snap button).

Of course, you'll want a seamless audio transition between sections — and usually all that's necessary is to add a short crossfade. With guitar or piano, this is a simple process. Make sure that the splice for each section begins with a percussive note, then you can simply slip‑edit the start point with the percussive transient, and drag it toward the left (earlier) so that it crossfades with the previous decay. Typically, a 10‑50ms crossfade will be enough, but this can vary; there's no hard and fast rule. You'll also want to make sure that automatic crossfade is enabled.

You may run into a situation where there's a level mismatch between sections. You can use the Gain process function to match levels if the entire section is too soft or too loud, but a clip envelope might be a better option, as you can trim the level at only the beginning, then have a subtle transition to the clip's existing level, or end with a good match for the next clip's level.

1. Set the Now time at the start of the project and go Transport / Set Timecode at Now.

3. Set markers at the beginning of each take, as in method one, step one, earlier.

4. Go View / Markers to bring up the Markers window. Double‑click on the first marker, and when the marker window appears, tick 'Lock to SMPTE (Real World) Time'.

5. Repeat this for all other markers, so that all the markers are locked to SMPTE timecode.

6. As in method one, jump among markers, audition sections, and start building a composite file.

7. When it's time to change the markers so that they land on the next section to be auditioned, note the time difference between a marker's current position and what the next position should be. For example, say the playing in the first 15 seconds of a piece was perfect, and you want to use it in the composite. Now you want to listen to 15 seconds onward, so the markers should fall 15 seconds later.

8. Set the Now time at the beginning of the project and go Transport / Set Timecode at Now.

10. A window appears that says 'Move locked markers to reflect the new SMPTE offset?' Click 'Yes' and the markers move 15 seconds later — but the clips remain in the same position.

11. As with method one, jump among markers, audition the next set of sections and copy the best section to the composite file.

So now we've assembled all the bits into one glorious take, with crossfaded, seamless transitions between the various sections we judged to be the best.

All that's left is to bounce all the tracks of the final, composite performance together into a single stereo file. Select all the clips in the final version, place the loop locators to define the beginning and end of the section to be bounced, enable the loop, and go Edit / Bounce to Track(s). Done!