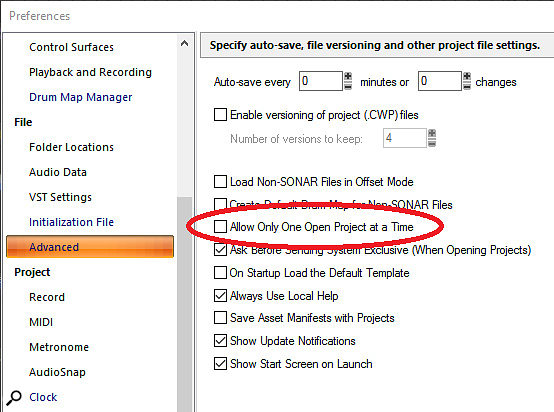 Without unticking the ‘Allow Only One Open Project at a Time’ box, this technique won’t work!

Regarding computers, one online dictionary defines the term ‘sandbox’ as “an environment in which software developers or editors can create and test new content, separate from other content in the project.” For example, when a web site does an update, to avoid disruption, any preliminary testing isn’t done on the site itself. Instead, the developers create a parallel site in a ‘sandbox’, where testers can blow things up without affecting the main site.

So let’s make a sandbox for Sonar, except this sandbox connects intimately with Sonar because you can drag parts of a project into the sandbox and experiment. If you like the results, you can drag the good bits back into Sonar. And if you don’t... it’s only sand!

The sandbox has all of Sonar’s attributes: you can drag in files, delete or group clips, change tempo, set up loops, try different effects, or whatever. And for the daring, you’re not limited to a single sandbox...

Choose Preferences / File / Advanced, and make sure ‘Allow Only One Open Project at a Time’ is not ticked. This technique takes advantage of Sonar’s ability to open up two projects simultaneously within a single instance of the program. Not only is it possible to cut, copy and paste between them, but you can drag and drop track data, too.

Choose File / Start Screen and click on New Project to bypass the project naming and folder creation process. Since the sandbox is intended for experimentation, if after doing your experiments you don’t save the sandbox project, whatever you played with will disappear. If you do want to save what’s in the sandbox, you’ll need to do so explicitly. (Another option is to have a blank project called ‘Sandbox’ pinned to the Start menu so it’s easy to call up.)

Now hit the Restore Down button for the sandbox project, and arrange your two project windows so the sandbox gives you enough room to play in, but leaves room for your main project so you can still drag and drop. 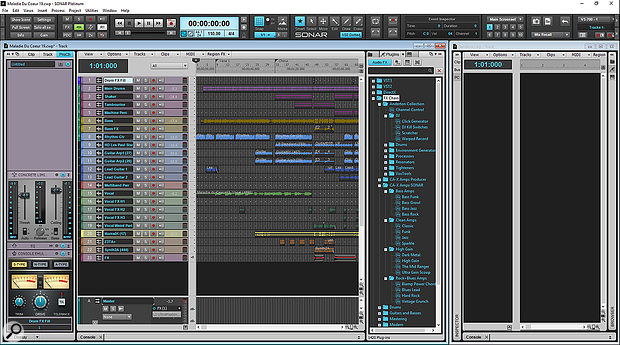 The Browser, Inspector and Multidock are hidden in the sandbox to provide more room for tracks, and to keep the overall window size small.

I recommend locking this configuration to screenset 1, as you’ll want to return to it. Note that each project doesn’t have its own screensets, but any screenset you choose applies to the project with the focus. So if there’s a Console-only screenset, that’s what the sandbox or the main project will show when you select the screenset.

When you first click on another project window to begin playback, Sonar may start stuttering. To avoid this, as well as other potential problems, click on the project window first to select it before doing any kind of editing or playback. Also, although ASIO typically handles only one program at a time, it can handle multiple projects within the same program. You can even open multiple sandboxes. As I have a big primary monitor and a smaller secondary one, I usually place the sandbox in the second monitor.

Before getting into applications, let me emphasise again this is intended as more of a scratchpad for testing and experimentation. If you want a sandbox for a complex, existing project, you’re better off doing a ‘Save As’ of your main project, calling it up, and playing around with that. After making your changes, you can then open up the original project and drag and drop the changed sections to it.

The sandbox can help keep your original project lean. My projects often suffer ‘track proliferation’, from generating multiple scratch tracks, trying experiments, creating safety copies I forget to delete, and so on. Although it’s best to clean up as you go, that’s a workflow killer. Also, eventually the project can become unwieldy and compromise performance. By working on sections in the sandbox, creating your messes there, and then bringing the finished result over into the main project, you can avoid these issues. Here are additional real-world examples.

Sometimes I use the sandbox to ‘park’ original parts, rather than cloning tracks, and do the modifications in the original project. Consider Melodyne pitch correction: it’s good practice to render after using Melodyne rather than keep lots of instances open, but unless there’s enough undo history, you won’t be able to re-visit the clip if you change your mind later. The usual solution is to making a safety copy of the track, but that produces lots of tracks you have to mute, erase eventually, and so on. You can use the sandbox to store the original clips, then when you’re done with the session, if all is well just don’t save the sandbox project, and the unneeded safeties will vanish.

The sandbox is also great for techniques like massed vocals. Bring over the main vocal and a premix, lay down an insane number of tracks, bounce, and bring them back into your main project.

Some applications are more about convenience. I’ll often bring clips into Sound Forge for manipulation in a big, separate window; the sandbox lets me do that within Sonar. Hitting the Maximise button gives a full-screen view of the clip for editing, and then with another click I can see both views and drag the clip back into Sonar. (And here’s an extra tip: you can zoom in to the individual sample in Sonar. I’ve cleaned up digital clicks by replacing a couple clipped samples with adjacent samples that aren’t clipped.)

If you need the same effect on a sandbox track as the track from which you dragged a clip, drag the effect from the main project’s FX Rack to the equivalent sandbox track’s FX Rack. You can even drag instruments if you use the ‘old school’ method of inserting instruments in FX Racks instead of the using the Insert Soft Synth command. However, as the object is more about experimenting, you’ll likely want to try different effects and instruments. 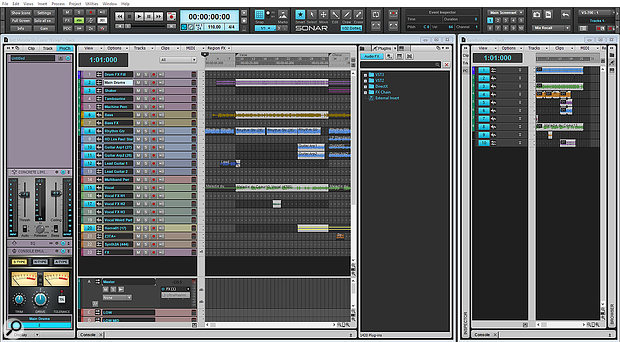 A song’s first verse has been ‘parked’ in the sandbox and all the clips grouped, so the block of clips can be dragged back into the main project as a placeholder for additional verses during the songwriting process.

Although not really the same type of sandbox application, it’s easy to drag over track data from another project without having to go through saving and recalling a track template, or exporting/importing audio.

Here’s a more MIDI-based example. Render a part using one virtual instrument, then drag the rendered audio into the sandbox. Render with another instrument, and another, and so on, continuing to bring the bounced audio into the sandbox. Experiment with cutting/pasting/bouncing the rendered audio to obtain the type of composite sound you want and, when done, bring the perfected audio back into the virtual-instrument audio track. Meanwhile, the underlying MIDI data remains undisturbed if you want to change the sound later.

Stuck In The Middle

The final example is somewhat esoteric, but it totally saved me with a tight deadline. I was creating a video demo for a product to be released at NAMM, and the demo consisted of comparing different sounds from a virtual instrument being driven by MIDI data with the same theme. I finished the audio but after creating the video in Sony Vegas (I was cutting video to audio) and seeing the context of audio and video playing together, I thought perhaps the theme was too repetitive, and would have preferred a different middle four for variety. However, it still needed to be consistent with the rest of the theme.

Given the tight deadline, I didn’t want to tear the project apart, particularly because I didn’t know if I could come up with something better. So, I reopened the original Sonar soundtrack project and created a sandbox with the virtual instrument where I tried playing a bunch of different middle four sections. I then bounced each option in the sandbox, dragged them one at a time into Sonar (now with the video loaded into the video track), and checked out which worked best with the video. After deciding, I opened Vegas and dragged the rendered section from the sandbox into Sony Vegas (yes, you can drag and drop files from Sonar into Vegas!) and replaced the relevant part of the audio. Creating multiple different versions and rendering them in the original project would have gotten quite messy!

The sandbox concept can even work well for parking grouped sections of an arrangement — but moving blocks around to do arrangements is another story, for a another time.