If you're interested in M/S recording or stereo image tweaks, Sonar's Channel Tools could be your best friend.

Over the past few revisions, Sonar has acquired quite a tool‑chest of utilities, but as they tend to be overshadowed by some of the more glamorous updates, it's time to give these utilities the attention they deserve. This month we'll look at a selection of techniques that make use of the new Channel Tools plug‑in.

One of Channel Tools' talents is decoding Mid/Side (M/S) recordings. If you're not familiar with this technique, M/S recording provides an alternative way to capture a stereo image compared to other approaches (for example, X‑Y miking or simply pointing two mics at the sound source). 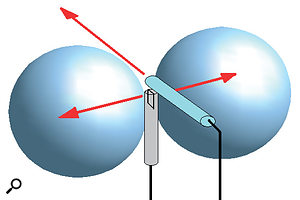 With Mid‑Side recording, a cardioid mic (coloured light blue) points at the sound source. A second, figure‑of‑eight‑response mic (coloured in grey; the spheres indicate its response pattern), captures left and and right information. M/S miking uses two mics. The 'mid' mic is typically a cardioid-pattern model, although you can also use omidirectional or figure‑of‑eight mics (experiment, as different mics give different results). That mic points directly at the sound source and you record its signal in the left channel of a stereo track. The second, 'side', mic must have a figure‑of‑eight (bidirectional) response, with its capsule as close as possible to the mid mic. The side mic points 90 degrees off‑axis from the sound source — its diaphragm is at a 90‑degree angle compared to the mid mic's diaphragm — and you record its signal to a stereo track's right channel. (It's possible to record the mid and side signals to different tracks, but it's more common to record them to a single stereo track.)

M/S recording has two main advantages. Not only does it excel for capturing room ambience, but audio sums to mono with no cancellation or other issues, because the only signal that's left is the mid mic (mono compatibility remains important for broadcast audio, like radio or TV). This has the side benefit of reducing ambience when collapsing to mono, which is usually desirable.

This recording technique is most commonly deployed when recording small ensembles with a reasonable degree of stereo information, such as, for example, a string quartet on stage. However, M/S recording can also be useful when recording a guitar amp in a room, doing overhead miking on drums, or recording choirs or church services. 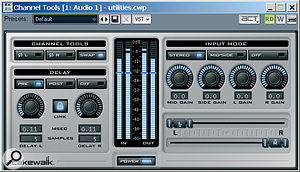 The Channel Tools module provides a variety of 'utility' processes for both stereo and Mid/Side signals.

If you just play back the two M/S‑recorded signals in Sonar as you would conventional stereo signals, you won't hear any stereo information; retrieving a stereo signal requires the M/S channels to be decoded, which is one of the Channel Tools plug‑in's functions. To decode an M/S signal recorded in the left and right channels of a stereo track, proceed as follows:

2. To narrow or widen the stereo image, reduce or increase (respectively) the Side Gain control.

3. To de‑emphasise or emphasise the mono portion, reduce or increase the Mid Gain control respectively.

4. Tweak the balance of the stereo image using the L Gain and R Gain controls.

You can also use Channel Tools to decode Mid/Side audio recorded on separate tracks, but the procedure is a little more complex.

1. Create a stereo aux bus and insert Channel Tools on the bus.

2. In the mid mic channel, turn up the aux send control to the Channel Tools bus, and pan the send full left. This should be pre‑fader, with the main channel fader turned down so that you hear only the signal going through the aux bus.

3. In the side mic channel, turn up the send control to the Channel Tools bus, and pan the send full right. This should also be pre‑fader with the main fader down.

4. Continue with the Channel Tools adjustments as described above in my first set of instructions.

Interestingly, you can also use these controls with stereo signals, because Channel Tools converts stereo inputs into M/S audio; simply click on Stereo for the input mode.

If your version of Sonar is 7 or below, it's still possible to decode M/S recordings without Channel Tools. Pan the mid mic's track to centre and the side mic full left. Clone the side mic channel to create a third track, invert its phase using the channel strip's Phase button, and pan it full right. Both side tracks should be at the same level. To raise or lower the side amount, use the Quick Group function to group them so that their levels change in tandem.

With many recordings, one of the mixing decisions you'll have to make is whether to mix from the audience or the performer perspective. For example, if you're mixing a live performance of a band, you'll almost certainly want the audience perspective, where the drummer's high‑hat is panned right and the floor toms panned left. On the other hand, I recently mixed (in Sonar, of course!) a classical CD of Soler sonatas by harpsichordist Kathleen McIntosh. Kathleen is not only a great player, but one who isn't a slave to tradition. When I suggested using close‑miking 'rock & roll' techniques to give an intimate feel, as opposed to doing something like X‑Y miking from a distance, she was game and, fortunately, loved the way it sounded. To further the intimacy, this time I chose the performer's perspective, with the low keyboard notes panned left, and the high notes panned right.

Channel Tools makes it easy to experiment with the two perspectives, thanks to the Swap option, which swaps the left and right channels. With a stereo input signal, click on the input mode's Stereo button, then on Swap. It's a little more complex in the case of Mid/Side signals. Ensure the 'Invert Right Channel Phase' button is not activated, and then invert the left channel phase, by clicking on the left channel Phase button. The right and left channels should now be swapped.

Similarly, inverting the right channel phase swaps the stereo image if the 'Invert Left Channel Phase' button is not activated. However, note that, despite using the Phase buttons to do swapping, you can still invert the phase of the mid signal compared to the side signal: click on Swap Channels to invert the side channel phase.

One of the major limitations of early Sonar versions was the way in which panning was handled, because it was extremely cumbersome to weight a signal so that it, for example, panned from left to centre instead of left to right. The DSP Gain function was reworked to make this possible, allowing users to put any amount of the left channel in the right channel, and vice‑versa. Channel Tools makes the process much easier, thanks to its panning options.

As to why this is important, suppose you have guitar and piano recorded in stereo. To keep them from fighting, as well as opening up some room in the centre for vocals, snare, kick, bass, and so on, you can use the Channel Tools pan controls to spread the guitar from left to centre, and the piano from right to centre.

Regarding how you actually use the panning controls to accomplish this, note that each pan slider (which, as usual, controls the 'angle' in the stereo field) includes linked controls to the slider's left and right that set the 'width'. The screenshot above shows a typical setting that still gives a sense of stereo between the left and centre, but widening the right signal weights the signal more toward the left. 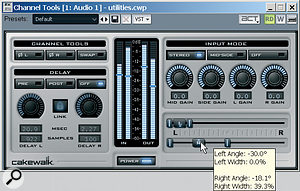 A stereo guitar signal has been panned so that the left is full left, while the right channel spreads from left to centre.

The panning section can also 'mono‑ise' stereo instruments so that they more easily occupy their own space in the stereo field. With so many instruments and effects generating full stereo outputs, narrowing these and panning them judiciously can give each instrument more of a pinpoint position. For example, imagine you have two keyboard parts recorded with stereo effects. If they're both panned to centre, they'll take over the stereo field. Narrowing one of the keyboards and weighting it more to the left, while narrowing the other keyboard and weighting it more to the right, opens up more space in the stereo field in the centre and extreme left and right positions for other instruments.

The signal flow inside Channel Tools.There's also an alternative panning control option. Normally, if you set a certain width and change the panning, and the width hits the end of the stereo field but you continue moving the pan control, the width will shrink to make sure that the pan control is in the centre of the available amount of width. If you hold Shift while moving the pan control, when a width control hits the end of the stereo field, you can't move the pan any further. This is helpful if you want to lock a signal into a particular width.

Incidentally, you can get two very useful pieces of info by right-clicking on a blank space in the Channel Tools interface. Choose 'Help', and the on-line help, including a brief primer on Mid/Side recording, appears. If you choose 'About', you can view a signal-flow graphic, as above.