Use track templates to give your electric guitar an acoustic sound and perk up your synths.

Templates are a convenient way to always have tracks with effects, buses and other elements set up and ready to go when you need them. You can even make the equivalent of your own channel-processing strips, which is exactly what we're going to investigate in this month's column.

Acoustic guitars tend to get brighter as you strum them harder, but electric guitars only get louder. The purpose of the 'Acoustifier' process is to impart some of that acoustic guitar characteristic to mostly dry electric sounds, thus making the sound more alive and vibrant. This process makes such a difference, yet sounds so natural, that having the Acoustifier in the signal path makes the sound seem the way it should be, in my opinion. When you bypass it, something feels wrong; for example, the guitar may suddenly sound dull.

To create this effect you'll need two tracks in parallel: one for the straight guitar sound, the other for the Acoustifier processing. In the Acoustifier track, insert the Cakewalk FX Expander/Gate, followed by the Sonitus EQ. (I know the Expander/Gate is pretty ancient, but it works really well in this application).

The key to a good 'Acoustifier' effect is in the expander and EQ settings. Now set the Expander/Gate parameters as follows:

Optimise your guitar input levels and try not to vary them too much, as the incoming level has a big effect on the expander's characteristics. Listen to the processed track and play a rhythm guitar part with lots of dynamics. The peaks should come through loud and clear, but the lower‑level sections should be much quieter. Also, the sound should be smooth, without noticeable 'flutter'. If there is any roughness or fluttering, experiment with increasing the release and attack times. Set the EQ parameters as follows:

Again, this is a point of departure. The object is to add a high‑frequency 'sparkle' and brightness; you may want to change this after you hear it in parallel with the dry signal.

Now play through only the 'acoustified' track. With hard strums, the high frequencies should jump out, but when playing more softly you won't hear anything or, at least, not much. Once this is adjusted, add in the dry electric guitar track and adjust for a balance that sounds good.

Sonar 8.5 has the PX64 percussion strip and VX64 vocal strip, and I thought it needed an SX64 synthesizer strip, so let's look at how to make your own SX64 track template. I came up with this primarily for synth-bass sounds, but the basic collection of modules also works well with pads, electric piano sounds and a lot more. 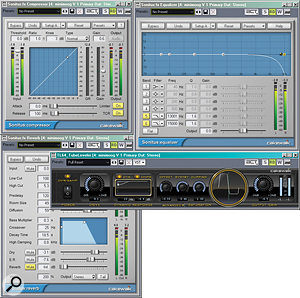 These four processors make up a track template that's optimised for processing synths.

The effects all go in series, and the first one in the chain is the Sonitus EQ. One of my favourite techniques is adding a bit of crunch to synth sounds, which the TL64 Tube Leveler (described next) provides. However, it's sometimes helpful to trim the frequency response going in, as distorting high‑frequency harmonics can add an unpleasant edge. If you play guitar, you'll know how pulling back on the tone control can give a creamier sound when going through distortion; the same principle applies here. So set up the EQ for a low‑pass response when you recall the track preset.

The second module is the TL64 Tube Leveler. An amp sim would also work well here, but that's not necessarily something I'd want to use all the time, whereas the TL64 can add subtle (or grotesque, if that's what you like!) effects that are useful for many types of synth sounds. In addition to giving crunchy effects on bass, with subtle settings it can add a really nice bite to pads, to make them a little less sweet. While the TL64 is fairly straightforward, there are a few features that are particularly useful for synths.

The Dynamic Response section offers a low‑cut filter. Drag the little square for the desired response, as indicated in the fields at the bottom of the window. This is helpful if you want a thinner sound, or to keep the bass out of the drive/distortion effect. However, if you don't want to distort the bass, but you still want to keep the same amount of low end, enable the CMPS button. This compensates for cutting the bass response by adding undistorted bass back into the signal path. It's also worth clicking on the Advanced button, as this brings up controls for Offset and Symmetry of the clipped waveform. Altering these can change the timbre in interesting ways and are good for making a 'round' synth bass sound a little more jagged.

The next processor is the Compressor, but, as set up in this template, it's serving only as a limiter, to trap any resonances or spikes. These are the typical settings:

Note that you can also use the Compressor to create a 'loudness maximiser' effect by turning up the Gain parameter. This pushes the signal up against the limiter's ceiling and, for moderate amounts of maximisation, adds no audible distortion.

Finally, there's the Sonitus Reverb. However, it's not being used to add a traditional Hall or Plate reverb — the PerfectSpace convolution reverb included with Sonar is ideal for that kind of ambience — but, rather, to simulate room reflections. This is particularly useful when the synth sound is part of an electric or acoustic ensemble, as the synth will sound more 'real' than the ultra‑stark sound you get by going direct. Adding even a little bit of reflected sound makes the synth somewhat warmer, and makes it slide into a mix a little more smoothly.

I mute the reverb, so the Bass Multiplier, Crossover, Decay Time and High Damping controls aren't relevant. For bass sounds, you'll probably want to use some low cut so that the reverb doesn't 'step on' the bass sound. A little pre‑delay can make the sound more pleasing; I usually set the room size to between 50 and 100 ms. For sustained sounds, a moderate amount of diffusion seems to work best, but set it to maximum for sounds with percussive attacks.

To achieve the right blend, turn the Dry control up for the basic level you want, then slowly turn up the ER control until the synth sits in a nice, warm bed of reflected sound.

Sonar doesn't allow you to merge an effects rack into another track, but there are several strategies you can use to make it easy to load this group of effects.

No matter which method you choose, I think you'll find this collection of effects very helpful when mixing with synth sounds.