The SOS team travel to Norway to help recording artist Thomas Dibdahl achieve the right balance between studio acoustics and his own unique views on aesthetics. 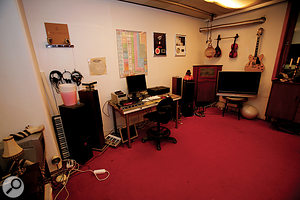 We arrived to find Thomas Dibdahl's monitoring setup suffering from a lack of acoustic treatment — an all‑too‑common problem on Studio SOS visits!

Taking advantage of the fact that we recently travelled to Stavanger, Norway, to give a talk at the Nordic Music Week event, we thought we'd tack on a Studio SOS visit to reader Thomas Dibdahl while we were there. Thomas is a highly respected recording artist in his native country, and has also toured the UK on a few occasions. He prides himself on working with a minimalist setup: one of his albums was made using just one mic, and he prefers using acoustic spaces and improvised devices rather than electronic processing to shape his sounds. For example, he has an 1840s grand piano that he uses almost exclusively as a resonator/reverb, playing sounds into it from small loudspeakers, and he goes to great lengths to give his recording space a non studio‑like feel. 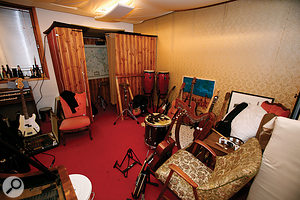 Part of the challenge of this Studio SOS was to improve the acoustics while maintaining the look Thomas prefers for his recording space.

We'd had little information about the studio before the visit and had to guess at the likely requirements, but as Universal Acoustic had a distributor in Norway, they very kindly arranged to get us a box of acoustic foam panels and some adhesive, which arrived in time for us to start work.

When we first looked over the studio, shortly after arriving in Stavanger on the day before the scheduled Studio SOS visit, we found a large room of around 4.5 x 7m, and perhaps 2.4m high, with a suspended acoustic ceiling that was largely obscured by cotton drapes. A heavy wooden concertina room-divider was left in the open position, where its folds provided a little impromptu diffusion, and in one rear corner Thomas had built a flimsy wooden structure that he used to record the acoustic guitar. This was like a small shed or sauna made from thin tongue‑and‑groove, with some mineral-wool acoustic panels forming a low ceiling, and our immediate feeling was that its parallel walls and small dimensions would add some unwanted coloration to the sound. The grand piano/reverb was behind the folded room divider, about halfway back in the room, while the minimalist recording system was set up against the front wall, with widely‑spaced, floor‑standing domestic speakers firing down the length of the room. Thomas doesn't like the sound of studio monitors, so had opted to use two sets of hi‑fi speakers — one of a very respectable quality and the others chosen for their unrefined character — reasoning that if his mixes sounded OK on both monitors, then they probably were OK.

There were some DIY sound absorbers, which comprised 25mm Rockwool with a semi‑rigid backing, scattered around the playing area at the back of the room. Thomas had covered these in velour fabric, and also suspended some similar devices below the recessed strip lights in the ceiling, to take out a metallic resonance that he'd heard before fitting them. There was no acoustic treatment at the front of the room at all (apart from the ceiling tiles) and precious little room to work either, as the floor space was largely taken up with instruments, boxes and other bits of gear looking for a home. It's hard to describe precisely, but if pushed I'd say Thomas was going for an 'eccentric grandmother' vibe — with retro furniture, fabric drapes and home‑made, velour‑covered sound absorbers!

In terms of gear, Thomas's studio is based around a Macbook Pro running Cubase, and hooked up to an RME Fireface audio interface. His mic collection is centred around an original Rode NT2, and although he's since bought a couple of more recent models, he still prefers the NT2 for his own voice, amplified by an SM Pro TC01 tube preamp.

Over our evening meal, we developed a strategy, which was to treat the front of the room (to improve the monitoring environment), and to dismantle the wooden shed, leaving just the panels attached to the walls to provide a reflective area for recording acoustic instruments. We'd rearrange the furniture to create some working space, rearrange the empty wine‑bottle 'diffusors' that graced every shelf and ledge, and find some way to lift the speakers off the floor, to get the tweeters at head height when mixing. 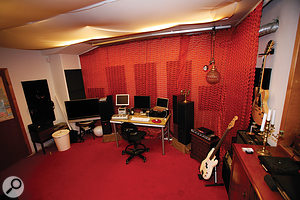 After we'd rearranged things, put up some accoustic treatment and disguised the 'studio look' using a backdrop from one of Thomas' tours, things begand to sound and look rather nicer.

When Thomas saw the grey studio-foam panels we'd been supplied with, he was worried that they looked too much like a studio product, but nonetheless seemed prepared to give it a go. We removed all his pictures from the front of the room, revealing a rather bland, bare wall. The plan was to glue to the foam by its corners only, so that removing it wouldn't make too much of a mess.

At this point, Thomas remembered that he'd bought some rather sumptuous green wallpaper with a view to papering this wall, so in the spirit of international co‑operation we agreed to do this for him. However, as Thomas was trying to locate the paste and brushes, he discovered a large amount of orange‑red lace‑like material that he'd used as a backdrop for one of his live tours. This caused a quick rethink on studio cosmetics, the outcome of which was that we would stick the foam to the existing wall and then hang the red fabric in front of it, by wiring it to the metal supports holding up the suspended ceiling. We could also press some of Thomas' own absorbers into service on the side walls where they'd be visible, as they fitted in better with his ideas on decor. 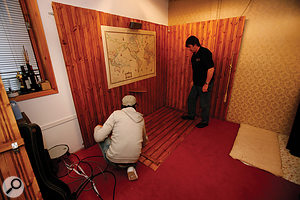 Thomas Dibdahl and Paul White set about dismantling the sauna‑style vocal booth, which was just too small to make a useful recording space.The arrangement we ended up with used eight 2 x 2-foot tiles on the front wall, with five panels spaced across the wall at ear height, and the central three of these panels being extended upwards with three further panels. A mixture of foam and DIY absorbers was placed on the side walls at the mirror points. As soon as we fixed these up, the monitoring position sounded noticeably drier, so we just had to find a way to get the speakers up to the right height.

We considered using concrete blocks, paving slabs and wooden decking, before discovering the solution literally under our feet: two very rigid, plastic beer‑crates! Once we'd removed the spikes from the main speakers, both sets fitted perfectly side by side, with their tweeters now very close to the ideal ear‑level position. Thomas found some hessian fabric to disguise the crates and we experimented with the speaker positions and angles to get the best imaging at the listening spot. Mounting the speakers close to the edge of the table improved the stability of phantom centre images considerably (the speakers had been much more widely spaced originally), but we had to be careful about reflections from the glass table top, so we kept the speakers fairly well forward. 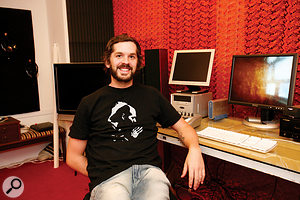 After demolishing the wooden shed and using some of the spare wood to extend the rear wall panel, we spent a while dusting, vacuuming and rearranging the furniture to create more useful floor space. All the gear was disconnected and then re‑plugged so that we could tidy up the wiring, with a little help from some cable ties, and the audio interface was relocated to a small piece of furniture to the right of the right-hand speakers, to maximise desk space. Thomas kept his PC on the desktop for running Sound Forge and other PC‑only software he relies on, and he also set up a small MIDI keyboard.

Once we had everything cleaned and tidied up, the red material covering the front wall really did add to the eccentric‑granny vibe that Thomas was so keen to retain. A flat‑screen TV monitor was relocated to the front of the studio, to the left of the speakers, where it was angled in such a way that it wouldn't bounce sound back to the listening seat. Hugh's test CD confirmed that everything was now sounding OK and the bass end was surprisingly even, which I suspect was largely due to the flattering room dimensions and the mineral wool behind the perforated acoustic ceiling. We had a good sense of stereo perspective, with a marked increase in overall clarity that Thomas noticed right away.

We suggested putting a hard wooden floor in the corner where the reflective wall panels were fixed, as this would add more life to acoustic instruments, and we tried to re‑purpose one of the removed 'shed' panels to achieve that. However, it quickly became clear that the tongue and groove panels creaked far too much to use as a floor, and that a solid sheet of MDF or hardboard would be a better solution. 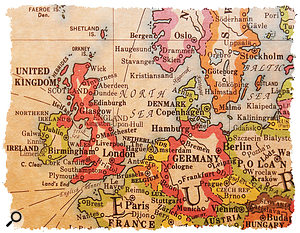 Stavanger, the location of our Studio SOS, is a surprisingly short distance across the North Sea from the UK.

We finished off the day by redistributing some of the DIY acoustic panels Thomas had made. Most of these were used around the rear of the room, with some on the walls above the wooden ' reflector' panels, but we also glued a dozen smaller panels to a storage-cupboard door, to provide an alternative 'dead' corner. The dead area would need to be extended across the back wall, and Thomas has some large duvets that could be suspended easily from chains over the ceiling-tile support rails when necessary. Job completed and Thomas seemingly happy with the results, we left to explore the nightlife of Stavanger!

Thomas Dibdahl: "The room is working out very well, though it took a few sessions to get adjusted to its dry character. It used to boom a little more and be more lively, but once I got used to it I quickly found that it was easier to work on details and to fine‑tune things: it was like the stereo image just got clearer and things stood out more. The sound-absorbing panels on the wall in the listening room soak up more than I thought they would. The second half of the room is now used as a pure recording room. The wooden corner we built works great with acoustic guitars and vocals, and the third wooden wall has been cool for using as a floor board when recording drums.”