The Sonar X2 update added the Breverb algorithmic reverb, which offers a more open, airy sound than the venerable Sonitus:fx Reverb, and also complements the Perfect Space convolution-based reverb. While featuring the same basic control complement as other algorithmic reverbs, Breverb can be combined with other plug-ins and techniques to produce some truly novel effects. What's more, while the techniques outlined here are optimised for Sonar X2 and Breverb, many of them are based on principles that can easily be adapted to other reverbs, and even other DAWs.

This can produce dramatic stereo imaging with mono sources panned to centre, such as vocals or snare drum:

1. Following the Breverb with Channel Tools, with one of its channels delayed, gives a wider reverb that can add a super-stereo effect to mono signals.The longer the delay, the greater the apparent width, which will be much wider than usual. With mono signal sources panned to centre, this technique keeps the reverb out of the centre so that it provides ambience without stepping on the vocal. However, it can still be very useful with stereo sounds when you want to emphasise the stereo spread.

This technique, which transposes a copy of the reverb and pans the tracks in opposition, works best with unpitched sounds like percussion. Insert Breverb on its own Send bus. You'll need to bounce the reverb sound without any dry signal so that the reverb is on its own track; there are several ways to do this. Probably the simplest way is as follows:

Note that it's possible to use this idea with some melodic parts if you transpose by -7 semitones to produce a reverb clip that's a fifth below the other reverb clip.

This effect creates a very smooth, even, liquid reverb that flattens percussive peaks. The secret is to place the Sonitus:fx Reverb before the Breverb; as with the previous examples, this uses a separate Send bus. Try it with guitar: 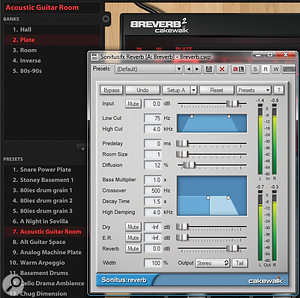 It's possible to combine resonance with reverb, and you can even achieve some interesting spring reverb-type sounds with sufficient tweaking. This technique works best with percussive parts (including ones with melodies), but be adventurous and see what else you can conjure up.

3. By adjusting the Predelay time, you can set the 'pitch' of the reverb's resonator. A calculator definitely comes in handy!

You must use the Hall algorithm for this effect, as it's the only one with dual Regeneration parameters. A good starting point is the 80s-90s preset bank, from which you can load the 'HiT Snare' preset. Click on the Pre tab and set the Regen L and Regen R controls to 100 percent. If the reverb is on an aux bus, set Dry level to zero.

I particularly like this technique with sparse hip-hop parts, or applied to individual drum hits (snare, for example). But, as usual, there are plenty of other options. I've even used it on some background vocals and rhythm guitar parts:

4. Note the two sends from the drum track; one feeds the Breverb bus, while the other terminates in the Sonitus:fx Gate's side-chain input.

For best results, you want a smooth-sounding reverb with a long tail. From the Hall bank, call up the 'Ball Room' patch, click on the Main tab, and then increase the Time parameter to around 10 seconds. Set size to 50 percent or so. (The 'De-Percussivator' technique of placing a Sonitus reverb in front of the Breverb works well for this application, as it gives a very smooth tail.)

The Gate parameters have a huge influence on the sound. For a traditional gated sound, set the Hold to around 200ms and Decay to about 40ms. The shorter the Decay, the more abrupt the gating will be. A tiny bit of Attack (around 4-5ms) can avoid stepping on a percussive sound's attack.

Adjust the Threshold for reliable triggering, and Depth to how much you want the reverb attenuated when the Gate is closed. Adjust the amount of dry signal with the original audio track's Volume slider, and the wet signal at the Breverb or with the Send bus's Volume.

We still have one more trick up our sleeves: delaying the gated reverb with the Breverb Predelay control. For best results, the Gate's hold time needs to be more than the amount of Predelay. To sync the timing to tempo, use the formula (60,000/[tempo in BPM]) = [duration of a quarter note in ms]. This technique works well for short delays, such as 16th or 8th notes.

For longer delays, insert the Tempo Delay — set for delayed sound only — after the Gate in the reverb bus. Adding feedback to the delay can also create some really cool effects, especially if you take advantage of the Tempo Delay's filtering in the delay's feedback path (choose the filter type with the EQ Mode control, and vary the filtering characteristics with the Low, Mid and High controls).

Inverse reverb algorithms often suffer from a kind of grainy quality, but it's possible to fake a much smoother sound using this special gated reverb technique.

Use the same setup as above, but adjust the gate Attack and Hold times so that they have the same value. The Attack gives the 'inverse' effect (don't overlook the potential of short values, such as around 50 to 60 ms, although longer times, such as 200 to 500 ms, provide a more traditional effect). Note that the Threshold setting is critical; it has to be high enough so that triggering doesn't occur all the time. Otherwise, there's no silent space that allows the attack to re-trigger on the next transient. This technique works best with individual drum hits, sparse drum parts, and choppy rhythm guitar.