Last month we looked at the basics of sampling sounds using Structure, prompted by the challenge I faced to produce a rendition of 'Jingle Bells' using only the sounds of a Morris Minor car for a BBC Radio 4 documentary. As a more conventional example, we also explored how to create a basic multisampled acoustic guitar in Structure from recordings of the six open strings, arranged so that any note can be played on a keyboard.

Especially if you're taking your samples from an unconventional source, you'll sometimes find that their pitches aren't quite on the note. In this case, you can use the Detune option just above Structure's keyboard section to get a sample bang in tune. Avid have helpfully provided a tuning reference, which can be activated by clicking on the tuning fork button and then setting it to the desired note. As you adjust the tuning of the sample, you'll hear a 'beating', which gets slower and slower as it gets closer to the reference pitch. You can repeat this process for each sample as required.

To make a playable instrument from a sample set, you'll need to tell Structure what to do when the MIDI note is released before the end of the sample, or held down for longer than the sample's duration. Unless you instruct it otherwise, Structure simply cuts the sound off dead when a key is released, which doesn't sound very natural. To resolve this, select the Zone tab at the top of the Edit window and scroll right to show the Envelope Shaper for the amplifier section

Adding a release envelope will help your sound decay more naturally when a key is released. . (The left‑hand envelope shaper is for the filter, so won't affect the volume envelope.) You can adjust the release time either by dragging the curved line after the Key Off point or moving the 'R' (Release) slider underneath. Experiment to find the optimum setting, which will vary depending on the type of sound you are manipulating.

By default, the longest your sound can play for is the length of the sample. With acoustic-guitar samples, that probably isn't going to be a problem, because any further stretching will sound unnatural, but the same is not true of all samples. For instance, the horn blast I recorded from the Morris Minor was not long enough to play some of the notes I needed it to. Not a problem: switch back into the Wave tab, and in Structure's Edit window, you can employ a clever looping feature

The two green lines indicate the section of your sample that will be looped when a key is held down.. Click on the Loop button and two green lines will appear. These show where looping will start and finish. The idea is that when you press the key down on the keyboard, the sample plays to the loop out point; as long as the key is still held, it then goes round and round within the loop section, and only when you release the key does it play the rest of the sample to the end. For this to work, the loop points have to be carefully chosen, otherwise you will hear a glitch whenever it jumps back to the start of the loop.

Fortunately, the looping feature in Structure is intelligent. Press the 'fast forward' double-arrow button to the right of the start point, and the 'rewind' double-arrow button to the left of the end point and then look at the quality percentage. This displays a numerical indication of how good it thinks the loop will be. In the example shown here, it's measuring 93.5 percent, which is great — anything above 90 percent means the loop point will be virtually inaudible

A good loop: 93.5 percent!. A loop that rates less than 90 percent could be improved by using the crossfade feature, while anything less than 75 percent probably isn't going to hack it. Sometimes Structure can need a little manual help to find a good loop. Another trick is to reduce the maximum size: the default value is 512, but reducing it to 256, or even 128, can produce a 90 percent‑plus quality result. With a loop in place, it is possible to have a note last for as long as a key is held down on the keyboard.

Structure can also change the attack and release of the basic raw sample. In the case of my Morris Minor project, this was useful to fade out the ambience that was on the end of the recordings — even though they had been recorded in a car park late at night, there was still some 'atmos' in the samples. To do this, drag the orange 'E' line to the end of the useful audio, move the top grey anchor to create a fade‑out, then use the middle, grey anchor to adjust the shape of the fade. Likewise if there is a little bit of a gap at the start of your sample, you can move the orange Start marker up to the useful audio, so it sounds immediately a note is played, and also put a small fade-in on it, to smooth out any background sound

Here, I've trimmed and faded the ends of the sample to make it play instantly and eliminate unwanted ambient noise..

Having created a pitched instrument from the Morris Minor horn, my next challenge was to work out how to produce a drum kit from the various unpitched sounds we had recorded. To start with, I studied one of Structure's factory patches, in this case the '60s Vintage Kit', in order to reverse‑engineer my Morris Minor kit. Investigating factory patches is a very effective way of understanding how a plug‑in works. In the screen below 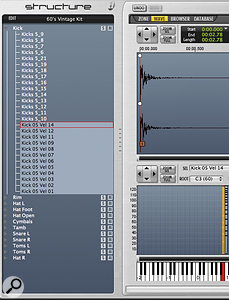 A factory sound from Structure: multiple kick‑drum samples are assigned to different velocity levels, as shown on the 'ladder' above the keyboard., you can see what the AIR programmers have done just for the kick‑drum sounds alone. They have created two different kick sounds, one assigned to B0 and the other to C1. You will also see what looks like a ladder above each key on the virtual keyboard in Structure. This represents different samples that will be triggered depending on the velocity of the appropriate MIDI note, so improving the 'realism' of the patch. The AIR programmers have done the same for the other drum sounds in the kit.

I went through all the raw sounds we had recorded, and started to identify which ones would work as substitutes for which drum sounds. The door and boot sounds worked well for 'kick' and 'snare', and I ended up using the squeaky suspension as the closed hi‑hat, for a bit of fun! The rest of the cymbal sounds and the open hi‑hat came from the suspended hubcap, which we had hit in a variety of ways to achieve a range of different sounds. However, although the open hi‑hat was quite easy to find, we didn't have any long, ringing sounds from the hubcap: they all decayed too quickly to make convincing cymbals, so I experimented with a number of time‑stretching plug‑ins to try and stretch them out. I ended up using the 4x and 8x range in Serato's Pitch 'n Time, which was able to really stretch out the hubcap sound without losing its metallic ring.

Once I had isolated and processed my samples, I labelled them all and brought them into Structure. In the screen, right 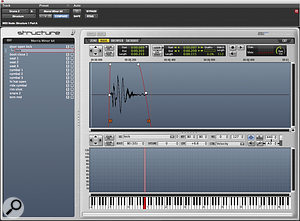 My completed Morris Minor drum kit., you can see them all in the Edit list. I didn't attempt to use different samples for different velocities, but stuck to one sample per element of the kit. You can also see, I used fades to further tidy the samples up. I needed to set each sample's Root key to the note it was being triggered from, to get them to play at the right pitch, probably because I was dragging samples in direct from a Pro Tools track, and the filenames contained no pitch information.

Finally, I needed to use the Level option to adjust the relative volumes of each of the drum sounds, to balance my kit. This can be accessed from either above the keyboard in the Wave tab, or in the Amplifier section on the Zone tab. The Zone tab also lets you pan the samples.

Having built my Morris Minor kit, I needed to save it as a patch that I could recall into any other project at a later date. To do this, back in the main Structure window, select 'Save Patch As' from the Patch menu. From here, you can determine where on your system the patch will be saved, and whether it will have the samples stored with it. 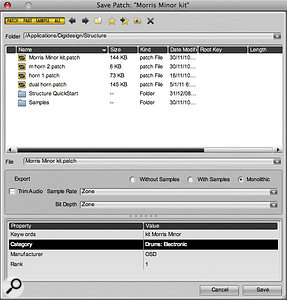 Choosing the 'monolithic' option ensures all source samples are saved with a patch. If you have the drive space, it's best to choose the Monolithic option, which saves the patch with all the samples embedded in it as a single file, so you are no longer dependent on the original Session or audio files. You can also add metadata at the bottom of the window to help you find the sounds later, using parameters such as Key Words, Category and Manufacturer — in this case, me! Finally, hit Save and your patch will be ready for the next project.

So, how well did it work? When I played an earlier version to the producer, the feedback was, in effect, that it was too good! It didn't sound like a Morris Minor, so I simplified the arrangement and used a horn sample without looping, plus a hubcap sample employed as a melodic instrument, and the team were delighted. Unfortunately, the finished product belongs to the BBC so I cannot put it up on line, but it can be heard as part of Radio 4's Podcast of the Week for the week 24th to 31st December 2010. I would love to know what you think!