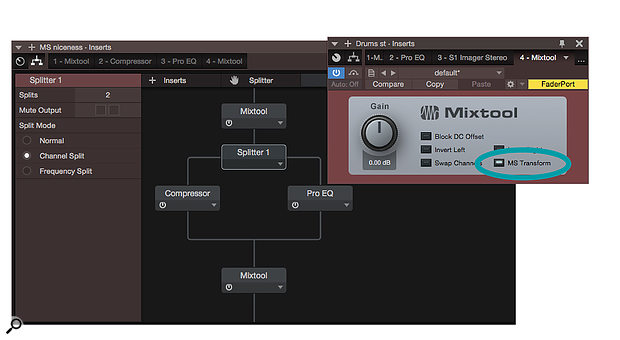 Screen 1: The Mixtool plug-in transforms a stereo input signal into a Mid‑Sides signal for separate processing, and then, after processing, transforms them back to left-right stereo.

Studio One's ability to make many plug-ins work as one can save you a lot of time and effort.

Studio One's Channel Editor is a brilliant encapsulation device that lets you wrap up chunks of functionality, in the form of plug-in chains, and treat them as a single entity. I find myself most often using the Channel Editor to create modules that instantiate small, utilitarian functions. Once configured, a module can be stored by dragging from the Inserts legend on the channel where you've built it to the FX Chains folder on the Effects tab of the browser. Now, you merely have to drag from the browser to a channel to instantiate a function that would otherwise take a few minutes to construct.

Over the course of numerous sessions and projects, small enhancements like these save a huge amount of time and energy. Further, while many of these modules need to be tweaked for each individual context, some can be stored in an optimised form that works pretty easily across the board. This month I look at a handful of these little gems I've made and found useful, all of which can be treated as generic structures in which other specific functions can be substituted.

The very first Studio One column I wrote for Sound On Sound was on building a Mid‑Sides matrix that allows separate processing of the Middle and Sides signals. When the Channel Editor appeared, I recast my design into that context.

The key component is the stereo Mixtool plug-in. (You can't do M‑S from a mono signal, so the mono Mixtool lacks a few features of the stereo version, including the M‑S matrix.) The compressor and EQ shown are common Mid and Sides processing choices, which can be replaced with whatever processing you like. One thing I liked was creating a 'breathing' effect by applying a touch of very slow flanging to the Sides signal. Mixtool transforms the signal to Mid and Sides at the beginning, and after processing, it transforms them back into left/right signals (the same M‑S matrix works in either direction).

The Channel Editor can also be used to set up separate level controls for the left and right channels of a stereo signal, which are sometimes preferable to a single balance control. This one is so easy I'll admit I have not even bothered to store it. Add a splitter set to Channel Split and you get two branches, each with a level control. Done!

Most stereo synthesis methods involve phase or delay. But the oldest trick in the book remains useful, and that is band splitting. When stereo records first came out, mono recordings were often converted to stereo by using a high-pass-filtered version of the recording in one channel and a low-pass-filtered version in the other. The ear notices the difference and responds by perceiving the signal as not being localised to the centre.

One advantage to this method is that it can be made to be entirely mono-compatible. However, I also like it because it is noticeable but subtle. I find it useful for adding a bit of width to vocals, both singing and spoken word.

Band splitting develops the original high-low split into a slightly more sophisticated approach that uses complementary comb filters applied to the left and right channels. In Studio One, a mono track can be switched to be a stereo track, which simply feeds the mono signal to left and right. That's a perfect setup for applying comb filtering in the Channel Editor.

You can also use the Channel Editor's Frequency Split mode to divide the signal into two or more frequency bands, allowing you to employ your favourite full-rage compressor as a multiband device, or to apply different effects to high and low frequencies. One of my favorite treatments is applying a light stereo flange to mids and highs, say on drum overheads, and then recombining them with the lows. I have also had fun putting just the high and mid frequencies of a vocal through a delay.

Some compressors have a limiter section as well as a compressor, for two-stage compression — so the limiter clamps sudden peaks while the compressor gently evens out longer-term dynamic variation. Studio One does not bundle a dynamics processor that does both limiting and compression, but it's easy to set up an FX Chain that combines the two.

Screen 2: Parallel compression is an easy and obvious module. I like the Fat Channel's 1176 model for this kind of squashing.

The Channel Editor can also be set up to enable parallel processing on plug-ins that don't support it natively. I constructed a little parallel compression module that splits the signal, sends one branch into a compressor set to give a pretty good squash, then recombines the branches, using the channel editor level adjustment at the compressor's output to achieve the right mix. I find the FET compressor model in the Fat Channel to perform well in this context, but use whatever compressor you favour.

Ducking, or side-chain-triggered compression, is an outstanding technique for keeping long effect tails (or any other signal, for that matter) out of the way of a featured instrument, most often vocals. I have a few different versions of this module optimised for common applications: a long vocal delay for Pink Floyd-style lead vocals, a faster delay with more repeats for lead guitar, and so forth. I have another version that is set up to provide a couple of dB of ducking to music and effects stems to make room for dialogue, the side-chain signal source. 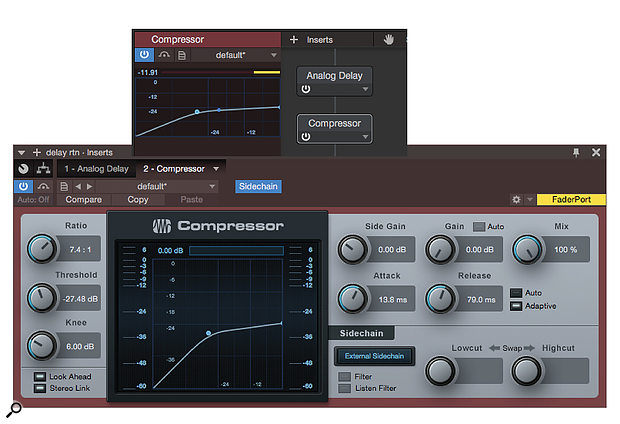 Screen 3: This module pairs an effects plug-in with a compressor to duck the effects in response to a side-chain signal. Note that the ratio is set fairly high and the threshold somewhat low. Finding appropriate attack and release times can require a little playing around.

The differences between these application-specific modules lie mostly in delay times and compressor settings, especially threshold and release. The basic signal path is simple: an effects plug-in feeding a compressor plug-in. Each time you insert this module, you must route a send from the source channel to the compressor side-chain.

Compressing the output of a reverb can give it more punch, even when it's mixed behind the source, while placing a compressor on the input side of the reverb has a different effect that can also be useful. I have a version of this module with a high-pass EQ before the reverb to reduce boominess. There's a squishiness to the TubeComp (an LA-2A emulation) in the Fat Channel set to Limit mode that works nicely on reverb.

Finally, as we saw back in the July 2018 issue, the Channel Editor can be used to apply different effects to the loud and quiet sections of a signal. In essence, the signal is split into multiple branches and gates are set to open new branches as the signal gets louder. So, for example, a soft vocal might have a lush, long reverb, while loud vocals have a tighter room.

Just as with macros, the utility of an FX Chain in the Channel Editor is tied more to convenience than complexity. Even where an FX Chain contains only two plug-ins, making an FX Chain module will save you time if you often use those two plug-ins in that configuration. It is worth mentioning, too, that multi-instruments provide similar functionality on the MIDI/control side of things. You can create a composite instrument from several virtual instruments, configure it to work nicely, then save the whole system as a multi-instrument.

This is my last Studio One column for Sound On Sound. I've been writing the column for six years and it is time for me to move on to other things and let someone else share their ideas and tips on Studio One. Happy recording!