Explore and learn to use Studio One 2's Audioloop and Musicloop formats.

One of the tools in Studio One's kit is the Audioloop file format, and its variant, the Musicloop format. PreSonus introduced the Audioloop format with the release of Studio One 2, raising the question of whether the world really needed more loop file formats. Well, it's not quite drowning in them: REX2, Apple Loops, WAV and Acidised WAV are really the only formats in wide use. So it would seem there is room, if there was something worthwhile a new format could offer.

The Musicloop file format is an Audioloop file with a few extras added. Musicloop files also store performance (MIDI) data, the virtual instrument preset used, and any effects presets used on the instrument channels. All this is in addition to an audio file.

If we take a closer look, some of the interesting possibilities become clearer. For a start, the audio is in an uncompressed format (WAV or FLAC). It is clear enough what is in this file with an Audioloop, but what kind of audio is stored with a Musicloop? It's a bounce of the instrument track to an audio file through any and all effects on the instrument channels. Dragging a Musicloop out of the Browser creates an instrument track (unless you drag it to an existing track), puts the MIDI/performance data on it, instantiates the instrument, loads the preset, instantiates the instrument channel's effects, and loads their presets, all from a single drag-and-drop.

The performance data is stored as a Standard MIDI File (SMF), and also as a '.music' file, which is a PreSonus proprietary performance data format with much higher resolution than MIDI. The instrument and effects presets are stored in their native formats, and this is where things start getting interesting.

There are three versions of Studio One: Artist, Producer, and Professional. All of them come bundled with content, including Audioloops and Musicloops. Click the Sounds tab at the bottom of the Browser, then open the Studio One Musicloops folder and the Drums subfolder. You'll see files with .musicloop extensions, but to see what's inside them, right-click (Ctrl-click on Mac) on one of the Musicloop files and choose 'Show Package Contents' from the contextual menu that drops down.

A disclosure triangle should have appeared next to the file (and will remain there from this point on), and clicking that drops down all of those wonderful components I was talking about: an audio file, an SMF (with .mid extension), the PreSonus .music file of the same performance data, and an instrument preset. It looks as though you could drag any one of those components out of the Browser and into a track as easily as dragging the whole Musicloop file, and, of course, that is exactly the case, so the audio and MIDI loops contained in the file can be used separately from each other.

For instance, in picture 3, I have dragged the audio file in as the basic loop. The MIDI file has been dragged in separately to create an instrument track with the loop, which doubles the original loop with a different instrument than what is stored in the Musicloop. Note that the track is named 'Part' because that is the name of the component. Changing the name to a more informative one is suggested. 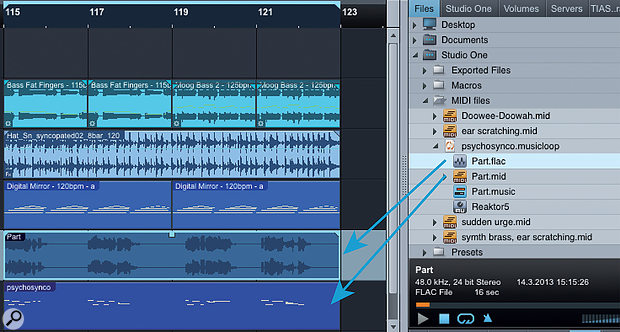 Picture 3: Components of a Musicloop can be used individually. Here, the .mid file has been used to double the loop with a different sound played by another instrument.

If I double-click on the .musicloop file in the Browser, the Preview Player plays the audio file stored in the loop file, which is, of course, the original version. (Double-clicking the FLAC or WAV file in the loop file will play the same thing.) But maybe I want to hear that same loop on another synth. All I do is make sure that synth is in the Song and that the instrument track playing it is selected. Then I double-click the .mid file and the loop plays on the selected track. With looped playback in the Preview Player, I can click on various instrument tracks running different instruments to quickly audition the same loop on each of them. You can do the same thing with .music files. I like this a lot; anything that lets me try ideas very fast enhances my music making.

Now let's look at an Audioloop file. Studio One Artist does not include any Audioloop files, but Producer and Professional do. If you have Artist, never fear; it's not hard to make your own Audioloop files, as we will discover shortly. Open the Electronic Audioloops collection in the Sounds tab of the Browser, and then open Drum & Bass Jungle/Drum & Bass Pack 150bpm. All of the Audioloops have disclosure triangles, and clicking them reveals the individual slices in the file. As is the case with Musicloop files, double-clicking on the main file plays the entire audio file, but double-clicking on an individual slice plays only that slice. You can also — again, like Musicloop files — drag any individual slice out of the Browser to use on its own.

Musicloop files are created in Studio One from instrument parts. Here's how:

If your loop encompasses multiple audio events on a track, you'll need to select them all and choose the Audio/Merge to Audio Part command to merge them into an audio part. What used to be individual Events are now slices in the audio part. Audioloops do not store presets, but, hey, it's always a good idea to store presets anyway, so you might as well.

You will probably want to check your loop as you build it. Trying different sounds with a loop was discussed earlier, but Studio One has a great shortcut for auditioning audio loops, which is simply to Shift-click on the Event you are about to make into an Audioloop or Musicloop and hold down the mouse button. The Event will now loop play until you release the mouse button. Very nice!

You can also audition loops in the Browser in time with the Song, as described below.

PreSonus's new Audioloop and, especially, Musicloop file formats have some powerful capabilities. The fact that the Musicloop file carries an audio file as well as all the data needed to recreate the original loop opens up many possibilities, and the drag-and-drop simplicity of making and using these files encourages you to explore those possibilities.