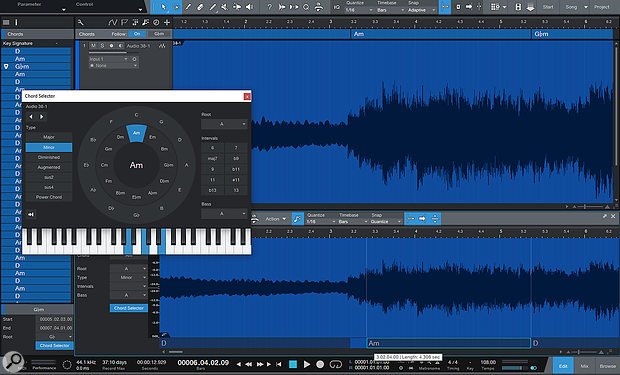 To make audio parts follow the Chord track, you'll need to detect the chords within them. This process often requires a little help from the user!

Studio One's Chord track is much more than just an auto-arrangement device.

Introduced in Studio One 4, the Chord track has since taken on a life of its own. It's gone from being a convenient way to audition different chord progressions to a means of transforming arrangements, kicking out music sheets, easing post-production key finding, generating bass lines and melodies, experimental audio processing, adding unexpected key changes and — my favourite — bending free–form Eurorack performances into musically interesting songs. This month, I'm going to explore the Chord track, as it's a surprisingly exciting place to spend your time.

The Chord track runs along the top of your project, underneath the timeline. It's revealed by clicking the little 'note with trailing blocks' button, and double-clicking or clicking with the pen tool will create chord blocks on it. These default to being a bar long, in the key of C. Double-click a chord block and you can select any chord you want from the Chord Selector wheel. You can choose from a list or form the chord by clicking the notes on the virtual keyboard. It's really very easy. It's also possible to take an existing MIDI or audio part and extract Chord track information from that.

With a Chord track and chord blocks in place, your MIDI arrangement will follow those chords, visibly changing the MIDI notes fed to both internal and external instruments. Audio can be made to follow as well, but that takes a bit more work which we'll come to in a moment. It's all wholly non-destructive so if you don't like how it's turning out you can switch the Chord track off and all the notes will return to their original position.

The Chord track acts globally on your project, although you do have to instruct individual tracks to follow it. The option Follow Chords appears in the Inspector, along with a few additional options. For MIDI tracks, the options are:

For audio tracks you get two additional options:

Audio tracks also have an additional option called Tune Mode. This tailors the pitch-shifting algorithm to specific instrument types like bass, piano, guitar, brass, strings and so on. Armed with this information, I find it's really a matter of trial and error to see which options work out the best for your source material and expectations.

Studio One is fully aware of what your MIDI notes are because that information is right there in your MIDI track and piano-roll. So it takes minimal effort for Studio One to determine the chord structure and shift the notes to follow the Chord track. But what's immediately brilliant about this is that if you can't be bothered to play in or mouse in a whole chord progression in the MIDI editor, you could enter a single three- or four-note chord, duplicate it down the timeline and use the Chord track to transform it into whatever chords you like. You can then do the same with the bass line. Play in a single note in the rhythm of your bass line and it will move about to follow the chord changes without you having to enter another thing. It's like a big chordal pitch quantiser, and it doesn't only work with chords: it can be applied to single notes, arpeggiations or lead solos.

A second tip is that if you like the chordal changes and want to apply them to a track or region permanently, you can do this without rendering them to audio by using the Freeze Pitch option, found under Musical Functions from the right-click menu. If you subsequently turn off the Chord track, frozen notes won't revert back to their original pitches.

The Chord track can be very helpful for creating lead sheets for musicians or singers using the optional Notion scorewriting software. By visiting the Song menu you can export the melody as notation directly from Studio One, and you can include the chords from the Chord track. To get sensible results, you need to ensure both the Chord track and the notes are quantised to the grid. You can then transpose the key of your song using the right-click menu in the Chord track and send different tunings to Notion. To do this, you have to select all the chords in the Chord track by Shift-clicking them individually and then right-clicking to use the Transpose function. This should be a lot easier to accomplish than it is, but doesn't detract from the fact that for MIDI arrangements, the Chord track is possibly the most useful arranging and developing tool since copy and paste.

...if you like the chordal changes and want to apply them to a track or region permanently, you can do this without rendering them to audio by using the Freeze Pitch option...

If you dig into the manual a bit you'll find that PreSonus are aware that the Chord track can be a bit hit-and-miss when applied to audio. Any sort of pitch-shifting of audio has the potential to generate unwanted artifacts or side-effects that can make it unusable. It's not that the polyphonic pitch-shifting algorithm doesn't work — it does, brilliantly — it's more that it can also generate some unfortunate weirdness. They suggest that for best quality, when you've used the Chord track on audio to try out different ideas and harmonic structures, you should then re-record your parts in the new key or sequence once you've settled on a chordal structure that works for you. Regardless, you can get still get away with a lot if you're prepared to put in a bit of work — and remember, this is all non-destructive, so you're not going to mess anything up.

Auto-detected chord boundaries are unlikely to fall precisely where you want them to. It all depends on your source material, but you may find that Studio One places chord changes after the initial transients, or in the middle of some sloppy playing. It's worthwhile spending some time in the audio editor adjusting the start points of the chords. The time signature dictates the resolution with which you can move them; when working to a grid, the chord-detection resolution only goes down to an eighth note. Any chord changes requiring finer resolution will need to be adjusted manually, which you can do by setting the timebase to Seconds. (This is also the way to go if your audio was not recorded to a click or grid.)

With well–made audio tracks or loops, the Chord track can be very effective, especially if they are rhythmically defined. It's when the chord changes happen mid-flow that you experience the slurring and drag of noticeable pitch-shifting. This is particularly troublesome with vocals, but then you may be better off working in Melodyne if you want to retain all the qualities of the performance. Or, as PreSonus say, once you're happy then re-record your audio!

One place where I've found the Chord track effective is when playing around with Eurorack jams. Chord progressions are often avoided in modular systems because they can be tricky to patch and may require CV processing modules you don't yet possess. At least, that's what I find, so I tend to record a length of musical twiddling where the harmonic content remains largely the same while other things are modulated. Playing around with the Chord track after the fact can bring some very dramatic and welcome changes. And with the unpredictability we like to inject into our modular signals, the pitch-shifting artifacts actually fit well into the nature of the sound.

One very nice feature of the Chord Selector is a little button that enables it to use chords from an incoming MIDI controller. You can do this to MIDI tracks, of course, but it's more interesting to take control of your audio tracks from your MIDI keyboard. Whatever combination of notes you play, the Chord Selector will interpret them as an actual chord and apply that chord the next time the audio comes to the chord you are editing. It's not quite clever enough to do it in real time; it requires a little bit of thought before the audio responds, but it's an immensely enjoyable way to fiddle with your modular recordings.

It's easy to assume that the Chord track is some kind of auto-accompaniment device that no serious musician would ever need. But it has a lot of uses and creative potential when working out new ideas or experimenting. Give it a go!