The modulation matrix in Mai Tai. A few things to note: mod wheel and Envelope 2 are each routed to two destinations, Character-Sound is controlled by two different sources, and velocity is used both as a source and a scaler.

Synthesized and sampled instrument sounds come alive when modified by control functions. The two most common forms of control are tactile controllers such as keyboard, faders, ribbons and wheels, and modulation sources like envelope generators and LFOs.

Studio One makes broad provision for tactile controllers through its External Devices dialogue, Control Link, and other mechanisms. This month I delve into both modulation capabilities and how external controllers can bring life to your sounds.

All of Studio One’s bundled virtual instruments have modulation capabilities, but the Presence and Mai Tai instruments are the most powerful, because they have modulation matrices allowing up to 16 modulation sources to be mapped to the instrument’s core parameters. The 16 mapping slots are divided into two banks of eight called Mod A and Mod B, accessed by the modulation bank buttons on the left.

Each source can be independently scaled and applied negatively or positively, which allows for sophisticated modulation schemes. For example, you might assign key number to lengthen the release time of the amplitude envelope, and apply velocity to shorten envelope length. This would result in higher notes ringing out longer, while louder notes sound shorter and punchier.

The same modulation source can be used in multiple slots in the matrix, assigned to a different target parameter in each. Each assignment has its own intensity setting, and careful crafting of these assignments and scalings can yield nuanced control over multiple parameters from one source. It is easy to bypass a modulation patch, to help understand the contribution of each one. 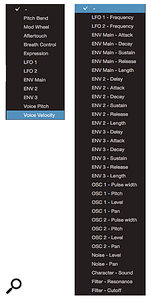 Mai Tai modulation sources (L) and destinations (R). Some parameters, such as Drive, are not included as destinations.Available modulation sources include MIDI parameters such as key number (called, with typical inconsistency, Voice Pitch on Mai Tai and Key on Presence), velocity, pitch-bend and so forth, as well as internal sources such as LFOs and envelopes. There are generous, but not comprehensive, sets of destination parameters for the instruments, which can’t be extended: it would be nice if one could make a parameter available in the modulation matrix by adding an automation lane for it on the appropriate instrument track, but the set of target parameters in the matrix is limited to fixed sets of 11 (for Presence) or 12 (for Mai Tai) sources. Perhaps a future update will add more parametric modulation capability in the matrix.

The modulation matrix’s ‘special sauce’ is the ability for any source to be scaled by another source: in essence, modulation of modulation. The list of available sources for ‘mod mod’ is the same list as for direct modulation. The simplest application for ‘mod mod’ would be something like scaling an LFO with a mod wheel, so that vibrato can be brought in and out. Using a tactile controller to impose phrasing on a modulation source is a powerful concept, used often to add veracity to sampled orchestra instruments.

But internal sources can also be useful in ‘mod mod’ applications. For example, using velocity to scale that same vibrato LFO would mean that notes played harder would sound with more vibrato. Turn that LFO up to a considerably higher frequency (the LFOs in Mai Tai and Presence can go up to 8kHz) and you get audio-rate FM, so louder notes exhibit a timbral roughness not heard on softer notes.

A detuning patch. Each oscillator’s pitch is varied by a fast attack/slow decay envelope scaled by velocity. The envelopes have slightly different shapes and Intensities, though both intensities are set low so the effect won’t be too exaggerated, and negative, so the pitch quickly bends down and then slowly comes back up to tune. Using different envelopes and intensities increases the range of variation in the sound.Many acoustic instruments produce some detuning during note attacks. This can be simulated in the modulation matrix by routing a short-attack envelope to oscillator pitch, but the most organic results come when velocity is used to scale the envelope, so that louder notes have more detuning.

The macro controls in the channel editor take modulation power and flexibility to an even higher level. With eight virtual knobs, eight virtual buttons, and two X-Y pads, there are quite a few macro controls that can be deployed. The real power here comes by clicking the wrench icon in the upper left to open the macro controls mapping window. Here, you can access any of the VI’s parameters and assign one or more to any of the controllers. Each assignment has both an intensity setting and a scaling curve. Complex multi-parameter control can be set up, but only the macro controls can be chosen as sources here: internal modulation sources like LFOs and envelopes cannot be mapped as sources, only as destinations. 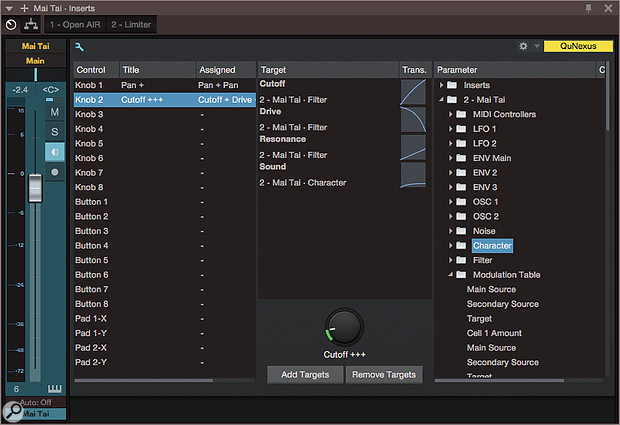 A few steps are required to configure a tactile controller before it can be readily used in Studio One. First, it has to be defined in the External Devices preferences panel. This will cause it to show up in lists of controllers within the program. Once the controller itself is established, Studio One needs to know about the individual controls it contains. PreSonus controllers, like the old FaderPort, newer FaderPort 8, CS18AI, or any of the company’s StudioLive mixers, really don’t need configuring: they should show up in the External Devices panel simply by being connected and powered. 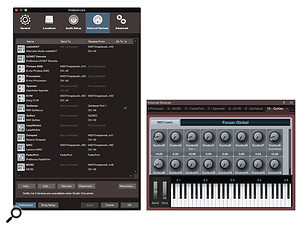 A few steps are required to configure a tactile controller before it can be readily used in Studio One. First, it has to be defined in the External Devices preferences panel. This will cause it to show up in lists of controllers within the program. Once the controller itself is established, Studio One needs to know about the individual controls it contains.For controllers that output standard MIDI continuous controller messages, configuration means opening the controller’s device controller map and using the MIDI Learn function to establish each control. The MIDI spec provides dedicated messages for a few key controls, like pitch-bend and aftertouch (channel pressure), rather than using continuous controller messages, and these are handled differently from CC messages. An external device with a pitch-bend wheel or lever must be defined as a keyboard and not a control surface, as control surface devices in Studio One do not recognise pitch-bend messages.

Many MIDI CC numbers have recommended assignments. Most of the time, these can be used for their suggested purposes or not, as you choose. However, a few CC messages are so commonly used for their usual purposes that unexpected things can happen if you use them in other ways. Examples include modulation wheel (CC 1), volume (CC 7) and pan (CC 10).

The modulation matrix includes mod wheel, pitch-bend and aftertouch as sources, but not any of the generic CC messages, so you’ll need Control Link to apply a generic MIDI CC to a VI parameter. (Of course, Control Link is not at all limited to Mai Tai and Presence; it is a generalised scheme for linking external controllers to parameters.)

A single control can be linked to multiple parameters with Control Link by making multiple assignments with the same source and different destinations, but a more powerful method is to use Control Link to link a macro control to a tactile control. Even the macro control X-Y pads can be put under the control of an external device.

By this point, it should be clear that there are several different schemes for applying control and modulation to Mai Tai, Presence, and other VIs, and that there is some amount of overlap between these schemes, but also areas of individual capability and, in some cases, little or no ability to execute a particular idea. For an example of the latter, let’s say I want to use aftertouch from a keyboard to control Drive on the filter of Mai Tai. The modulation matrix would seem an obvious place to make this sort of linkage, and aftertouch is, in fact, available as a modulation source; but cutoff and resonance are the only filter parameters in the matrix’s list of destinations. Drive is not there. What about Control Link? When I tried playing aftertouch on my Keith McMillen Instruments QuNexus, aftertouch appeared in the Control Link area as a Mai Tai or Presence destination, not as a modulation source. A device controller map is no help, either, as MIDI Learn seems not to see aftertouch. I haven’t yet found a way to control Driver from aftertouch.

Exceptions aside, though, Studio One offers many ways to control and/or modulate parameters in VIs. Thoughtful use of these can result in interesting sounds that vary in ways reminiscent of acoustic instruments. Each way has strengths and limitations, so it sometimes takes a little thought to suss out the best option for implementing a specific idea.