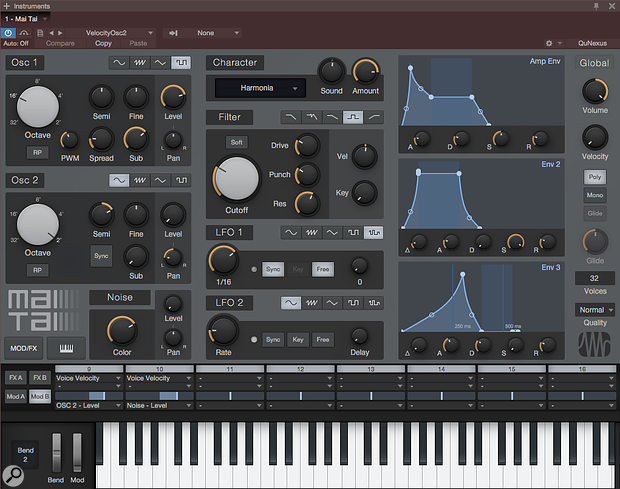 Screen 1: Mai Tai in all its splendour.

Learn to subtly vary the tone of Studio One’s headline soft synth, and you’ll add interest to your sounds.

The Mai Tai virtual instrument was added when Studio One 3 arrived. There is much to like about this synth, but I particularly enjoy the variety of mechanisms it provides for creating note-to-note timbral variation.

Synth patches that produce exactly the same tone for each note have rarely held my interest as much as ones that have some real-time timbral variation between notes. This is one of the things that makes acoustic instruments so musically rich: no two notes have exactly the same tone. So I look at every synth for the ways I can get the sound to be different for each note, whether just a little bit or a whole lot. Mai Tai gives me plenty to work with. Let’s take a look at a handful of timbral tricks Mai Tai can perform.

Using Mai Tai’s modulators is a key tactic in the quest for dynamic timbral change. Up to 16 modulation assignments can be made on Mai Tai: eight of them on the Mod A panel, and the other eight, shockingly, on the Mod B panel.

The modulation matrix is pretty straightforward. Select a modulation source from the drop-down menu in the source field just below the modulation routing number, and a target from the drop-down menu in the field at the bottom of the matrix. The modulation routing number is actually an enable button, making it easy to isolate the effect of one or more modulators by disabling the rest. The modifier field in the second row allows you an option to select a function to scale the source. An obvious example would be choosing an LFO as a source and the mod wheel as a modifier, so that the depth of LFO modulation is changed by the mod wheel. But you can just as easily select an envelope to modify another envelope, velocity to modify an LFO, or another of the many possibilities.

Finally, there is the Amount slider on the third row, which sets the maximum amount of modulation (as a percentage), and its polarity. Drag left for inverted polarity, right for normal polarity.

Good use of the modulation matrix can bring about some pretty sophisticated variations in tone. One of available LFO types is a randomised waveform identified as ‘SampleHold’, which can be great when set at a slow rate and used in very small amounts to vary pitch, filter cutoff, or some other parameter that affects tone. Two or more sources can be mixed by assigning them to the same target.

One simple but effective tactic is layering. The trick is to make the mix of the layers dynamic. 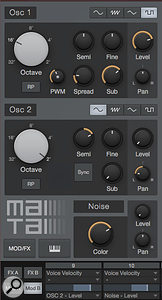 Screen 3: Oscillator 2 is pitched three and a half octaves above Osc 1, with its level modulated by velocity. Note that Osc 2 has also been panned, because it somehow seemed to add veracity to do so. A very small amount of noise is also mixed in, and also modulated by velocity. The resulting sound suggested a wind instrument. In Screen 3, you can see the pitch of Osc 2 is set three octaves plus a fourth (five semitones) above the pitch of Osc 1. With judicious mixing, Osc 2 can sound like an overtone, or a mechanical noise, like reed sound in a wind instrument. Setting the oscillators to exact octave settings gives an overtone feel, but tuning Osc 2 to this sort of interval above Osc 1 yields a dirtier feel, like a slight mechanical vibration.

Looking at the modulation matrix, you can see how dynamic timbral change is achieved: velocity is modulating Osc 2’s level, so harder hit (and, usually, louder) notes have more of Osc 2 mixed in. For additional variation, I dialled in just a little bit of noise and controlled its level with velocity, as well. The first pair of audio examples available online let you hear the Mai Tai sound without and with this technique.

The RP (Random Phase) button, when engaged (which it is not in this example), starts playing the associated oscillator from a different point in its waveform for each note. Even more tonal hilarity ensues.

Getting the tone in this example to vary in a smooth or controllable way requires balancing the impact of the note velocity coming from the controller, the amount of modulation applied, and the initial settings of the parameters being controlled. The Keith McMillen Instruments QuNexus keyboard I use is quite velocity-sensitive, and its editor software can apply different scaling curves to the velocity values, so I am able to get a pretty natural feel.

Perhaps your controller is not quite so flexible or does not give you enough variation in velocity. In that case, try randomising velocity using this clever little trick I lifted from a posting by Agus Hardiman in PreSonus’s Studio One forums:

Hardiman suggests making a macro out of these two steps, and I concur, especially because I generally invoke it two or three times in a row to get the amount of variation I like to hear.

The feature that sets Mai Tai apart from other synths the most is probably the Character section. This is a sophisticated waveshaper with simple controls. A drop-down menu allows you to select any of a baker’s dozen waveshaping filters, each of which has a very distinct sound. Once a waveshaper is selected, there is one variable parameter, Sound, and an intensity control, Amount. To decide which waveshaper to use, as you pick options from the drop-down menu, play with the Sound ‘knob’ to get an idea of the range of timbral variation the waveshaper provides. 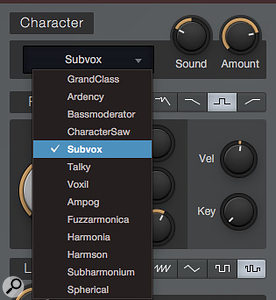 Screen 4: The Character section has only two parameters, Sound and Amount, but it offers a broad selection of waveshaping filters to choose from. The Sound parameter can be modulated for dynamic timbral change, and Amount can be automated.The Sound parameter can be modulated, providing another great way to get timbral change. In audio examples 3, 4 and 6, Sound is modulated by LFO 2 to create a slow tone change not correlated to the beat, thereby implying a more ‘human’ feel. In audio example 5, the Sync button was clicked to lock the LFO rate to the tempo, yielding a more predictable feel in timbral variation.

The Character waveshapers can change the sound of the oscillators quite substantially. Of course, the spectra of the oscillators inevitably changes the effect of the Filter section on the sound. The setting on the Amount control also has a strong timbral effect. Finding a sweet spot for all of the settings can require iterative tweaking of several parameters in the chain, but when I do manage to find one, it usually is immediately apparent; it just sounds rich and interesting.

Not all parameters useful for timbral variety can be modulated. But those that can’t be modulated can almost always be automated on the instrument track. Filter drive, Character amount and oscillator stereo width can all be automated but not modulated. In fact, automation greatly expands the number of parameters available for fomenting timbral indeterminism.

Automation takes a bit more work than modulation, because you have to generate the curves yourself. The paint tool can be used to draw waveforms for LFO-style modulation, and the Transform setting lets you shape waveforms you’ve drawn in; alternatively, you can draw a non-periodic modulation. In any event, once an automation curve has been generated, it can be copied and pasted in elsewhere.

Screen 5: Automation may be more work than modulation, but the list of automatable parameters in Mai Tai is long and glorious.Even with all that, there are still parameters useful to our quest that can neither be modulated nor automated. What to do, what to do? Well, there is one more fallback, and that is Control Link. Parameters like Sub level or filter type can be linked to a MIDI controller and the controller’s output recorded into Studio One. From there, the data can be edited and modified as needed.

Between modulation, layering and automation, there are many different mechanisms for varying timbre — but nothing says you need use only one at a time. It is important to note, however, that while timbral variation is generally a good thing, some kinds of variation will feel more musical than others. This might be by design, such as sync’ing timbral change to tempo, but often it’s simply a matter of finding a set of values for the parameters you are working with that produce a musical effect. For example, there may be a value for the Character section’s Sound parameter at which an octave harmonic is emphasised when the fifth of the key is played, adding ‘personality’ to that note.

The more sophistication there is in your preset — the more modulation sources or targets there are — the more complex it becomes to find a really usable combination of settings. This is not to say you can’t find really interesting sounds just fooling around with all of those parameters, only that it increasingly becomes a hit-or-miss proposition.

To me, sounds that change with each note have interest and, well, character. Mai Tai supplies so many ways to vary timbre that it’s possible to go over the top. I often find that subtlety brings more life to sounds than ham-fisted effects. But ham has its place, too. So get out there and shake those waves.

The audio examples in the downloadable Zip file illustrate some of the techniques used in this month’s Studio One workshop to add timbral variation to sounds from its Mai Tai soft synth.

A simple riff played on Mai Tai without applying any techniques to vary timbre.

The same riff with Osc 2 layered in several octaves above with its level modulated.

The next four examples all use the Character section with Sound modulation. The exact Sound, Amount and modulation settings were adjusted for each example, as were the modulation sources.

The Ardency Character setting with modulation from a SampleHold LFO.

The Subvox Character setting with slow sine modulation of Sound.

The Talky Character setting, with Random Phase active on Osc 1.

A whole bunch of timbre-varying tactics were applied on this one.