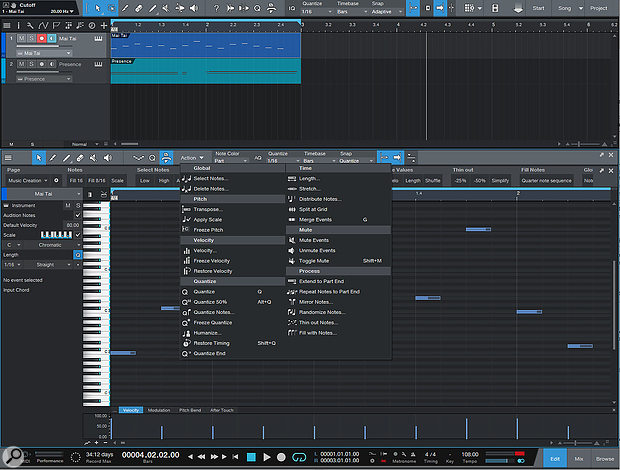 The new MIDI Note Actions are accessed from the Action menu.

In May, PreSonus released version 4.5 of Studio One, a major update that includes over 70 new features and enhancements, and is entirely free to all existing owners of version 4. In this workshop, I'm going to take a closer look at the new MIDI functions that adorn the redesigned Action menu in the piano-roll editor.

We'll kick off with Apply Scale, which seems like a simple enough function. It takes the scale that you can define over on the left of the piano roll, and applies it to selected notes. What strikes me as strange is that, until now, this scale hasn't really had anything other than a visual function. You could select the key and type of scale, whereupon little blue markers would appear on the piano roll to show you which notes are in that scale. Useful, I guess, but until now, there have never been any pitch quantisation options to pull the notes into that scale. The Apply Scale action does precisely that: it nudges the selected notes to the nearest note in the chosen scale and mode, allowing you to try out all sorts of different scales and modes on your MIDI parts. If you want to know what your track would sound like in C# rather than E, or in mixolydian or minor pentatonic, well, now you can.

The only slight annoyance is that the Apply Scale action should really be a button next to the scale selector because, at the moment, every time you change the scale you then have to re–open the menu and click Apply Scale again. Maybe you could improve on that by allocating it a keyboard shortcut or Macro button.

The new Mirror Notes function will 'reflect' notes around either the first, middle or last note of those selected, or some other note of your choice. If you choose all the notes in a clip, you'll find this a good way of flipping the entire section. You can flip notes vertically or horizontally, or both at the same time to send chords and melodies all over the place.

The Distribute Notes option is part of what's becoming an exciting move into automatic melody-generating functions, where a logical formula is applied to notes to adjust their position in some way. Distribute Notes does not affect pitch; rather, it's a sort of timing quantisation where you select a percentage by which the notes will be affected and Studio One tries to distribute them evenly in time. What's interesting about it is that as you experiment with the percentages, you discover new rhythms and timings that conventional quantisation or swing would never have found. At the same time, though, its decisions are not always particularly musical, and it will happily put notes over the top of each other to achieve its single-minded aims.

Studio One v4.5 also introduces a comprehensive Randomise Notes function. This offers a remarkable number of options and controls over something that's supposed to be random, the aim being to allow us to apply some limitation to the chaos for more pleasing results. What it doesn't do is add random notes to the piano roll; rather, it applies a randomisation algorithm to existing notes to mould their parameters.

Randomisation can be applied to pitch, velocity and note length, with an option to shuffle the notes about and also a handy Apply Scale tick box if you want to keep things musically meaningful. The three parameters have range and strength levels so you can get in there and hone your randomisation possibilities. None of this affects the start point of the note. 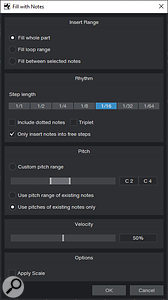 Selecting one of the new Actions brings up a dialogue box containing various options, which disappears once you click OK to apply the Action. This is the new Fill With Notes dialogue.Two more functions can operate hand-in-hand, depending on your approach. At a basic level, Thin Out Notes will delete randomly or musically chosen notes to calm down a busy section, while Fill With Notes will do the opposite, throwing in a bunch of extra notes to increase the complexity of the clip. Both have specific options on how you'd like them to act. Thin Out Notes can either 'simplify' a part musically or delete notes randomly, and acts on a sliding scale where zero percent doesn't do anything and 100 percent deletes the lot. You can also restrict the deletion to notes that are on a particular grid resolution, for instance to ensure that only notes not on the main beat are deleted. Fill With Notes gives you a few more options about where to put the additional notes: do you want them within the pitch range of the current notes, with a certain length? Do you want dotted notes or triplets, and do you want to Apply the Scale?

Filling and thinning can be a lot of fun. I found that if I restricted the filling to "Use pitches of existing notes only" and "Only insert notes into free steps" then it became like a hardware step sequencer, where applying the fill and then undoing it was like messing around with gate patterns. Thinning out the notes then takes it the other way. You can find yourself going from a basic pattern to a complex one and back again by repeating and undoing these functions. 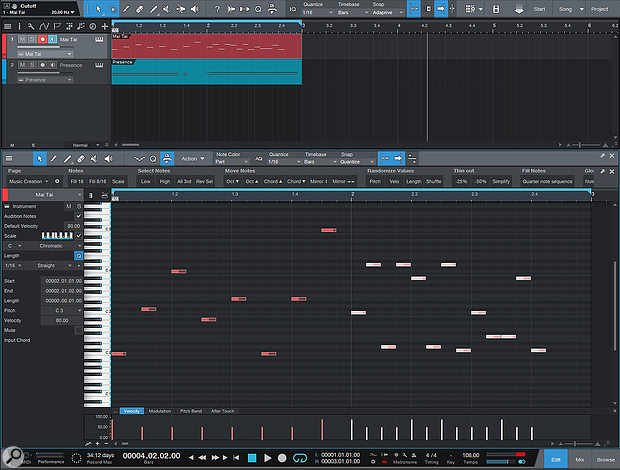 The right-hand side of this sequence shows the results of applying a Fill With Notes Action.

Studio One v4.5 also introduces a comprehensive Randomise Notes function. This offers a remarkable number of options and controls over something that's supposed to be random.

With these new MIDI Actions, PreSonus have given us some exciting creative tools to play with. But, in my view, they've also missed a trick here. While experimenting and playing with these Actions I was forever thwarted by having to open up the menu and re-find the action. To apply randomisation, for instance, you have to select the notes, click on Action, click on Randomisation, make your choices in the pop-up window and hit OK. The window then disappears. If the result is not quite what you're after, you can undo it, but then you have to go through the whole process again. What you want is to be able to keep trying different settings while the window is still open. The same is true of all these new MIDI Note Actions: they encourage and inspire experimentation but are hampered by the menu workflow.

To really bring these features alive, you want to be able to edit parameters and apply them on the fly. Perhaps, instead of occupying separate windows, they could reside on the left of the piano-roll editor where the Scale section is that so badly needs an Apply button? It would also be great if MIDI Note Actions could be available in the Pattern Sequencer, where they'd be completely relevant and appropriate.

To get around the menu issues, you could create a few Macro buttons based upon a function you want to apply, undo and reapply. But this means that you'll need to know in advance what parameters you're going to use. It works for the 'hardware step sequencer gate pattern' idea, because that doesn't require any adjustment, but if you want to experiment and try out different settings, the Macro system is no help.

Elsewhere, much of the emphasis of the 4.5 update is about fulfilling the expectations of former Pro Tools users, but I believe that within Studio One there's a creative and experimental performance engine wanting to emerge. It began with the pattern-based step sequencer and randomisation options. It continues with the live performance possibilities of the Impact XT sampler that I covered in an earlier workshop. And now we have a bunch of MIDI functions that have a modular flavour; they reflect the logic and mathematical functions often found in more experimental forms of sequencing and modulation. I can imagine perhaps having the ability to write a script where you can define a series of functions to be applied and then stand back and watch it all unfold. With a few well-placed buttons and quicker access to parameters and maybe a suite of CV-enabled plug-ins Studio One could soon be taking us down an experimental road to discovery.