PreSonus Studio One Tips & Techniques
By Larry the O

We help you get the best from PreSonus’s new Symphonic Orchestra instrument for Studio One. 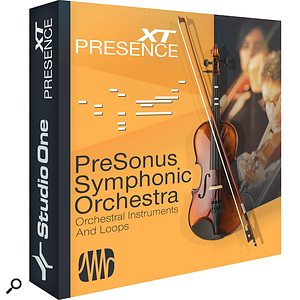 A few months ago, PreSonus released a new orchestral instrument for Studio One’s Presence sample player. It’s called PreSonus Symphonic Orchestra, or PSO, and it packs a substantial number of good-sounding orchestral samples into a reasonably priced package. The most interesting and powerful features of a good sample-based instrument are usually just below the surface, so that is what I’m going to explore in this month’s column.

Anyone who has worked with sampled instruments knows that imbuing them with musicality, whether realistically or not, is all about attention to detail. Approximating the nuanced vocabulary of a non-electronic instrument is a labour-intensive, but often very effective, method of bringing life and expressiveness to samples. Every instrument has articulations and effects that can be extracted from it, and these broaden the instrument’s vocabulary. In the orchestral world, a great many of these techniques have been formalised, often with Italian names with which scores become adorned.

PSO brings a rich sonic palette with lots of details at hand, but only an eight-page Quick Start Guide-like pamphlet to document them, so I will pass on some context, tips and hints to help you mine PSO more deeply.

Numerous other percussion presets present everything from bamboo chimes to Japanese bowls. Many of these exotic sounds are as useful as source material (read: cannon fodder) for sound design as they are used literally. In the PSO Classic Percussion folder you will also find additional non-percussion sounds hiding, specifically Orchestral FX presets, with falls, growls, squeals and all manner of extended techniques. Again, if you dig in here, you’ll find a lot just under the surface.

When a tonal instrument preset loads, the samples are restricted to the pitch range appropriate for the instrument loaded. This simplifies realistic orchestration, as it enforces instrument ranges. On the other hand, it also hampers your ability to abuse a sample by playing it far outside its natural range.

Articulations are often implemented in sample instruments through keyswitching, a sample playback scheme in which the notes in the bottom octave or so of a controller act as switches to select the alternative sample set (articulation) that will play when you press a note on the keyboard. Decent keyboard players (which I am not) probably learn to select articulations in real time, like playing a left-hand bass. 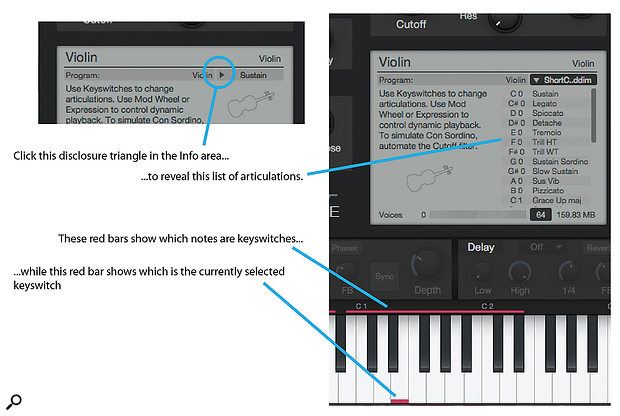 To see the articulations available for a particular instrument, either click the disclosure triangle in the Info area or hover over a keyswitch key until the tool tip pops up.

PSO shoehorns in an extensive collection of articulations that can be just the thing for an alternative sound, such as using col legno violin in place of staccato. The violin preset has two full octaves of keyswitch articulations, encompassing not only col legno, but spiccato, glissandi and many more. To see the articulations available for any PSO preset, click on the disclosure triangle near the top of the info area of the Presence editor and a list of articulations for the preset drops down. Keyswitches are marked in Presence’s keyboard area by a red bar stretching across the top of the keys, so a better and more exact picture emerges by hovering the cursor over each key and reading the tool tip that pops up. 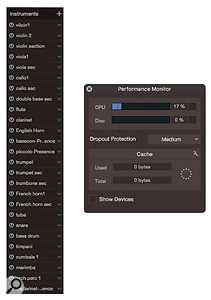 On the left is the list of Presence instances in an orchestral session. A look at the performance monitor shows that, when Studio One is not playing back, only 17 percent of the CPU is used. This does not rise significantly once playback starts, until you use a lot of tracks that have dense data on them.Notice that there are individual notes within keyswitch ranges that do not actually have any keyswitch function. As silly as it sounds, it is possible to be clicking on a note while checking out different articulations and not notice that there is no keyswitch on that note. (OK, yeah, guilty.) As an alternative to keyswitching, the Single Articulation presets each contain an individual articulation.

Once you’ve chosen appropriately from PSO’s rich sound set and healthy menu of articulations and effects, adding modulation and dynamics can help wring the last drops of expressiveness from the instruments. I personally feel these are best added using physical controllers. PSO’s presets are set up to allow dynamics to be imparted using the mod wheel, which is patched in most presets both to volume and filter cutoff; and, of course, you easily can add many more modulation patches to get more varied control of the sound.

I like to use a MIDI track for keyswitching and ‘automation’ (such as with the mod wheel) that is separate from the track containing the notes for the instrument part. If my session is large and unwieldy, I may choose to merge the keyswitch and controller data with the note data once it is pretty well finalised, but I usually end up keeping the tracks separate.

Using a separate track for controller and keyswitch data affords better flexibility and tighter control. With this arrangement, I can freely transpose note data without having to worry about keyswitch or other control data being affected.

Of course, in a real performance, different articulations do not all sound at the same level. On the whole, the articulation samples reflect this, but many situations require level adjustments to get the desired balance. Your separate controller track comes in handy once more to hold this automation.

Another mix consideration is that the instrument section presets (of which there are many, especially in the PSO Contemporary Strings library) are in full stereo. While this sounds great in isolation, in an ensemble of any appreciable size (let alone a full orchestra setup), piling several stereo section presets on top of each other will end up in a sonically undifferentiated mess. Thus, for ensemble applications you can use Studio One’s Dual Pan or Binaural Pan plug-ins to pan and/or narrow the stereo image, which can then be placed in the stereo field.

Similarly, most of the presets make liberal use of Presence’s onboard reverb, which is credible but unspectacular. I recommend setting up a nicer reverb in your song document and taking the time to send from each of the submixes (you are submixing each of the major instrument groups, right?). Disable the onboard reverb, or set it to supplement the ‘nice’ reverb just a little. 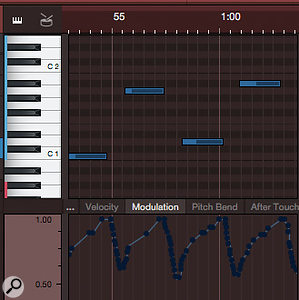 This data is from a musicloop. Note the mod-wheel gestures, which can be copied, reused and modified as easily as any riff could be.At a basic level of grabbing presets and using everything in a straightforward, traditional orchestral fashion, PSO is a pretty nice instrument. But taking a bit of time to poke around and do some auditioning will reveal many more musical and sonic options. Listening to the variety of instruments, articulations, and variations brought to mind the thick and three-dimensional results Brian Wilson achieved on Pet Sounds and some of his other best work.

And with all of I’ve said here, I have not even mentioned the extensive library of musicloops that are included (or the cool Sample Shift feature), but even they have more under the surface. Of course, you can use and alter the notes in a musicloop, but many of the PSO musicloops also have controller moves, especially mod-wheel actions. These gestures can be reused and edited as much as the note data can.

I should note, by the way, that it is extremely easy to use PSO in the most straightforward way, and I absolutely will be doing that a lot. But the real joy of discovery lies just slightly below the surface in PSO, and it’s worth making the effort to explore further.

Apart from percussion presets, most PreSonus Symphonic Orchestra presets contain only a single instrument sound, which may or may not include articulations. (It is possible to merge two presets and edit their ranges in the channel editor so they do not overlap, if desired.) So, if an instance of Presence is typically playing a single instrument, the total number of Presence instances clearly can grow large. What does this mean for your session?

Fortunately, Presence is a light load on your CPU. On my Late-2013 Mac Pro, I ran 26 instances of Presence loaded with PSO presets, and, when idling (not playing), only 17 percent of my CPU was consumed. Playing around a dozen instances at once only raised that to around 20 percent. Not bad!