Pro Tools' rulers not only show the passage of time, they allow you to control it! 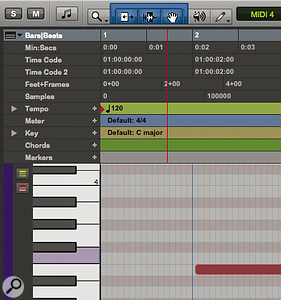 In this month's Pro Tools workshop, we're going to take a look in detail at the Rulers section of the Edit window. There are a lot of different ruler options, which can be displayed in both the Edit and MIDI Editor windows, as you can see in the screenshots. You can determine which rulers Pro Tools displays by clicking on the Rulers icon, which is displayed in the main timebase ruler. A drop‑down menu lets you select which rulers are visible. At the bottom of this menu are two shortcuts: All, which will display all the rulers, and Main, which will display just the main timebase ruler. You can also do a similar thing using the Ruler option in the View menu.

All the different rulers in Pro Tools fall into one of two groups: Timebase or Conductor. Timebase rulers, as the name suggests, measure time, and do so in a range of different formats, from conventional minutes and seconds, through feet & frames for film, or timecode for video, to bars and beats for music. Timebase rulers can measure time in two different ways: sample‑based time (absolute time) and tick‑based time (relative time). The Minutes:Seconds ruler, for instance, measures absolute time, while the Bars|Beats ruler measures relative time. In other words, the amount of time represented by each division of the Bars|Beats ruler is not fixed but depends on the overall tempo and other factors.

Pro Tools lets you set any track timebase as either sample‑based or tick‑based. 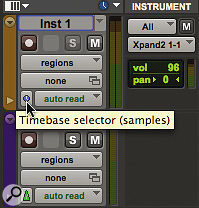 Conductor rulers display a variety of events that can affect or control the timebase. These include Markers (memory locations), Tempo and the Tempo Editor, Meter, Keys and the Key Signature Staff, as well as Chords.

Unlike the Timebase rulers, some of these Conductor rulers are new and still relatively unfamiliar to many Pro Tools users, so the rest of this workshop will focus on working with them. When doing so, I recommend that you change the Linearity Display mode to Linear Tick (relative) scale. 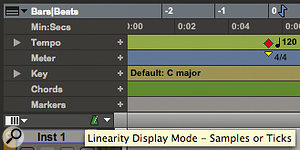 You can choose whether the timebase used to display the Edit window is linear in terms of absolute time or musical intervals — not always the same when tempo changes are involved. This will mean that, irrespective of the tempo, each bar will be displayed as equally long (which will mean that time-ruler scales such as samples or minutes and seconds will change when there are tempo changes).

The Tempo ruler displays tempo, with Tempo Event Markers indicating any changes. You can edit the tempo visually in the Graphic Tempo Editor, or make precise changes in tempo using the Tempo Operations window.

The Song Start Marker is a special tempo event that identifies the start of the song. By default, Pro Tools places it at the start of the Session but it doesn't have to be there. You can move it by dragging it with the mouse, but if you already have tick‑based regions in your Session, they will all move too. If you want to move the Start Song Marker and not have the regions move, hold down Start‑Shift (Windows) or Ctrl-Shift (Mac) before dragging it, but be aware that it will only move in whole bars when you do this. You can set the initial song tempo by double‑clicking the Song Start Marker and entering the revised tempo into the dialogue box that appears.

To insert a new tempo event, click in the tempo ruler at the point where you want the new tempo to start, then click on the Add Tempo button (+) in the tempo ruler header. Then, in the Tempo Change window, you can adjust the exact location and enter the new tempo, as well as defining what musical value to use for the Beats Per Minute (bpm) setting; the default is a crochet (quarter note). You can also choose to have the tempo event snap to bar, to get it tight on the start of a bar. 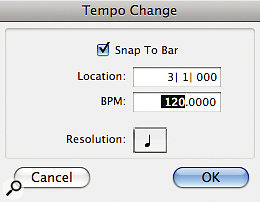 The Tempo Change dialogue provides a simple means of inserting a tempo change at a specific place.

All existing tempo events can be moved, edited, copied and pasted.

To access the Graphic Tempo Editor, click on the Expand triangle in the Tempo ruler header section. You now have access to a line that looks similar to the volume automation graph, which is used to graphically edit the tempo through the song. Tempo changes that occur over a number of bars, such as a rallentando at the end of a song, are actually made up of a series of straight lines. A setting called Tempo Edit Density determines how often Pro Tools will put in a tempo event to create your curve. It is accessed by clicking on the Dens: button in the Graphic Tempo Editor header section.

As well as editing, copying, pasting, moving and deleting events using the Grabber tool, you can scale up or down a group of events with the Trim tool and use the Pencil tool either to add new events or overwrite existing ones. As ever, you can choose the most appropriate Pencil tool mode from the drop‑down menu — the Line and Parabolic settings are the most useful in this context.

Once you have drawn the line, you will end up with a curve in which the start and end events, together with one part‑way through, are larger blue diamonds. These are the curve adjustment handles, and allow you to move the start and finish points and also the final shape of the curve. These update as you drag unless you hold down Start (Windows) or Ctrl (Mac) while adjusting the curve, in which case they'll only update afterwards.

A rallentando drawn as a curve into the Graphical Tempo Editor. Note the blue diamonds that control its shape.

You can use Shift-Tab or Shift-Alt-Tab to extend the selection forwards or backwards to the next or previous tempo event. This is useful when you then want to use the Trim tool to scale a tempo-event selection.

The Tempo Operation Window is the other way of creating a range of tempo events over time, using a dialogue box to determine what parameters you want to adjust rather than doing it graphically. To open a Tempo Operation window, go into the Events menu, select Tempo Operations, and then either select the Operations window or choose one of the predefined windows from the submenu. For example, I could choose Parabolic to create a rallentando, enter the appropriate start and end points, together with their respective tempos, then adjust the curve and set whether the end tempo reverts to the start tempo (Preserve Tempo) or not. 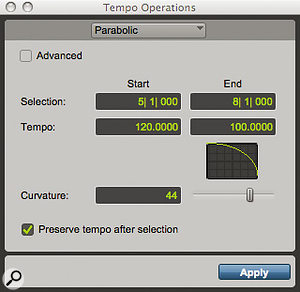 When you need a complex tempo change that conforms to precise specifications, the Tempo Operations dialogue is your friend.

The Meter ruler allows you to set and change the time signature (meter) through the song. You can use exactly the same techniques as I have described for the Tempo ruler for graphically inserting, moving, copying, pasting and deleted meter events directly on the Meter ruler. Similarly, if you double‑click the meter display on the Transport window, you can use the Meter Change window to create meter events.

The Key Signature ruler will display key signature events, and is useful for when you export your MIDI data to a score‑writing package such as Sibelius. You can also apply changes in key signature to transpose data on what Pro Tools calls 'Pitched Tracks', namely MIDI and Instrument tracks. However, you may not want all potential pitched tracks to be transposed when you insert a key signature. (A typical example would be a MIDI drum track.) You can enable or disable this from the track's Playlist menu.

The process of changing key signatures is similar to the other rulers but there is one trap you need to watch out for when you get to the Key Change dialogue window. If you want the Pitched tracks to be transposed, you must remember to tick the Edit Pitched Tracks box, otherwise the change of key will have no affect. Leaving it unticked is useful if you just want to insert key-change symbols into the Session, so that when you export the data to a score package they are already there for you.

Now we have a working understanding of the Conductor rulers, next month we are going to look at creating tempo maps for a variety of sources — including Sessions recorded without a click track...