Surround Mixing In Studio One Skip to main content

Surround Mixing In Studio One 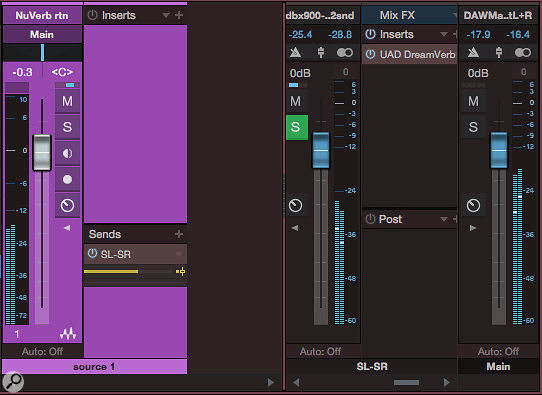 Screen 1: A simple method of creating surround from a stereo mix is to use reverb to generate surround channel signals.

Most audio production today is still stereo, but surround sound has become a consistent part of the landscape, especially with the rise of television mixed in surround. If you are doing a lot of surround work, Studio One is not the tool to use, both because it has no built-in surround facilities and because much surround work is to picture and Studio One’s video capabilities are sharply limited, as well. But if you were asked to deliver a basic surround mix of some music you created in Studio One, it can be made to serve, and this month I will show you how.

For the purposes of this article I make the following assumptions:

If these constraints are too severe for your situation, then you will be better off ponying up the money for one of the available tools designed to handle surround mixing.

The very simplest option is to ‘upmix’ a stereo mix to 5.1 surround using a plug-in designed for that job, of which there are several. However, don’t look for perfection, because it’s a tough job those plug-ins do. Sometimes plug-in algorithms can react poorly to certain source material and produce artifacts that may be a problem.

The next simplest option, which avoids artifacts, is a cheap-and-cheerful upmix method. In this scenario, we use reverb to generate our surround channels. Since the source material is stereo, we are talking here about 4.1, with no centre channel. Many music mixers avoid the centre channel other than for dialogue or vocals anyway, and if you are producing a music stem for a larger production, the mix engineer has the opportunity to route music to the centre during the final mix, if that is desired.

First, create a stereo output and name it something like ‘surround out’ or ‘SL-SR’. Now insert the same reverb on it that was used as the main reverb in the stereo mix (or the closest thing you have to it). For now, set the wet/dry mix to 100 percent wet, dial out most or all of the early reflections, and route the output pair to the surround (rear) speakers. Finally, create a send to this ‘SL-SR’ output on the channel for the stereo source. (See Screen 1 above.)

Put It Where You Want It

If you have access to the mix project with all of the individual elements, rather than just mixed stereo files, you can place instruments more precisely. Let’s look at two ways to do this. The first way uses the same pair of stereo buses as in our ‘easy rider’ solution (Screen 2). However, there are a few differences in how the setup is configured: 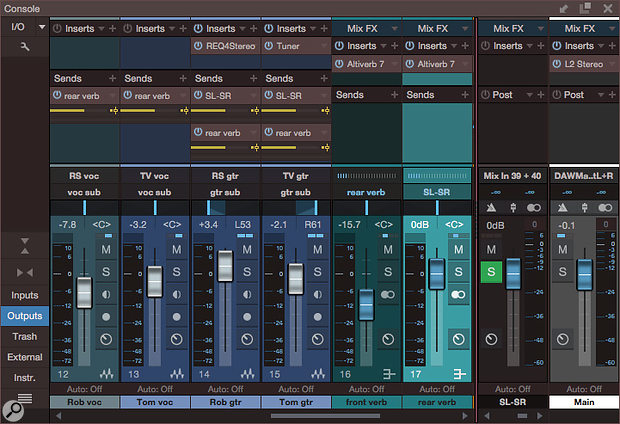 Screen 2: A mix project with individual channels assigned to surround channels using a send. Note the ‘rear verb’ bus channel with a second instance of Altiverb on it. This allows sources to be routed to the surround reverb without any of the dry signal going to the surround.

For static placement, this is a workable scheme, but it can be improved if you have any kind of physical controller, by using Control Link to map a physical fader both to the channel level (for front) and, with inverse response, to the surround level, thus making a crossfader. Link another physical fader to the channel and send pan controls and you can pan a source using two controls: left/right and front/back. Should you have an X/Y controller of some sort, you can use it as a full surround panner.

The second method is more precise but more work, and that is to use separate sends and buses for each surround speaker. Make two stereo outputs — front left/right and surround left/right — and two mono outputs, for centre and LFE (Screen 3 below). Now make sends to these outputs on each channel you want to place in surround. With routing being accomplished entirely with sends, the channel fader can become a source level that affects all outputs, as long as the sends are post-fader. 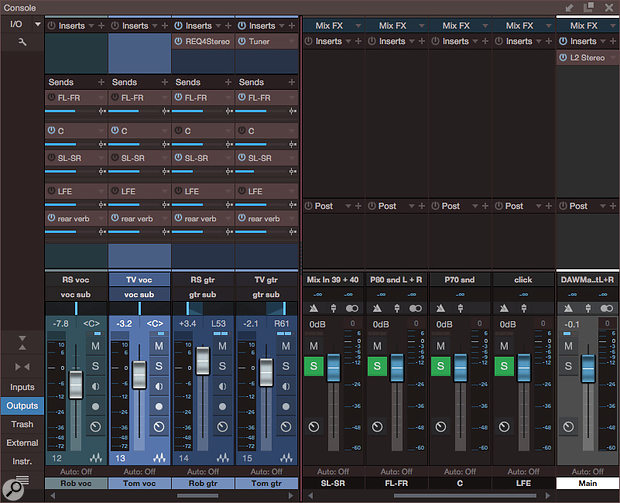 Screen 3: Six channels of sends are used on each mix channel for placing that channel in the surround field. The sends are post-fader, but could be made pre-fader if necessary. The Main stereo output provides a separate two-channel mix without the need to downmix.

Stereo sources can be accommodated, too, but there’s a trick. A pan control on a stereo channel (or, for that matter, a bus channel) changes left-right channel balance. But when you place a stereo source in surround space you usually do not want to lose any channel information, you just want to place it, meaning that what is needed is not changing channel balance but collapsing and panning the image. The Dual Pan plug-in (Screen 4) pans the left and right channels independently, making it easy to preserve signal from both channels and simply collapse the image.

Obviously, the front-back bus is used to pan between the front and back speakers.

Screen 4: The Dual Pan plug-in enables us to pan stereo signals without the loss of channel information that happens using the channel pan control (which is a stereo balance control). The pan position knobs can be mapped to a physical knob using Control Link.

Up until now, I haven’t really addressed the issue of bass management and the LFE channel, other than saying you should create an output for it. While there are bass-management plug-ins, we’re staying close to the bone here, so the DIY approach seems appealing. That just means putting a low-pass filter on the LFE channel at 80Hz or 120Hz (the two most common crossover frequencies), and a high-pass filter at around that same frequency on each of the other channels.

I tried to tell you not to get fancy with surround in Studio One. But would you listen? No. All right, then, I’ll throw in a tip for creating dynamic movement in Studio One.

The easy way to move a sound through a surround space is using a joystick or X/Y controller that can generate MIDI. If you have such a controller, you need only use Control Link to map the X axis to left-right panning and the Y axis to front-back panning. Front-back panning crossfades levels between the front and back stereo pairs, with inverse fader response on the surround stereo pair. Left-right panning (for a source placed anywhere between front and back) requires that the front and back pan controls both be linked to the X‑axis controller.

It would be convenient if there were a virtual X/Y controller right in Studio One, and in fact, there is one in the Channel Editor, but it can’t be used for this purpose because it only controls parameters of the plug-ins on a single channel. Without an X/Y controller, motion must be performed as a gesture using two controllers, performed in multiple automation passes, or drawn in as automation.

There are many conventions and subtleties of surround mixing I have completely ignored, and if any of those conventions and subtleties rear their heads, you’ll be left with no alternative to porting your session to some other environment that has surround mixing facilities. This can be a lot of work and there is a strong chance you won’t get it to sound the same as the original. Given that, the rudimentary methods I have shown here are worth trying if you need to generate a surround mix of a song you created in Studio One.