Track freezing makes it possible to create much larger projects, and collaborate with other Live users who have different plug-ins, all without cramping your style. 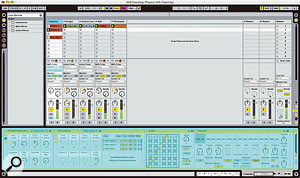 A frozen MIDI track. The Instrument Rack is frozen, but you can continue to launch Clips, record and edit arrangements, and use the mixer channel.Many of the most popular music recording packages offer a 'freeze' function, allowing you to reduce the CPU overhead of tracks by bouncing them to audio in the background. Track freezing was added to Live in version 6, vastly increasing the size of project you can work with on any given computer. Even better, because of the unique way in which Live handles arrangement, freezing a track is much less limiting than in most other software.

How Does It Work?

When a track is frozen (using the Freeze Track command in the Edit menu), all the CPU-intensive tasks are temporarily committed as recorded audio. This means that instrument or effect plug-ins on that track cannot be altered until the track is unfrozen again. In addition, each Clip in the session view is bounced to audio. For audio Clips, this means that Live is no longer Warping playback speed in real time, and for MIDI Clips, the instrument is no longer being played back in real time. Live handles all of this in the background, so not much appears to change from the user's perspective. 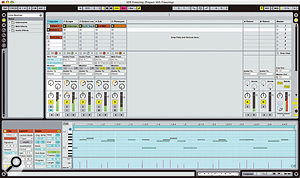 Frozen MIDI Clips appear to be playing back as normal, but Live is transparently substituting bounced audio Clips.

You can't change the Warp or Transpose settings of frozen audio Clips.In the screen above, the first track is a frozen MIDI track containing an instrument rack, based around the Impulse drum machine. There are three MIDI Clips in the track with different variations of a drum pattern. All the controls that can no longer be accessed are 'frozen over' with an icy blue colour. In the mixer channel, just the input selector, monitor mode buttons and record-enable buttons are disabled; all other basic mixer functions remain accessible. In the bottom half of the screen, however, you'll see that the instrument rack is completely blued out.

The screen at top right, opposite, shows a MIDI Clip view from the same track. Apart from being blue, the Clip appears to be playing back as normal, with the play position cursor looping though it. However, Live is actually transparently playing back a bounced audio version of the Clip, even though it's on a MIDI track.

The next example (opposite page, centre), shows an audio Clip on a frozen audio track. Various parameters have been frozen and are non-editable. These include the Clip's transposition and tuning, and the Warp settings. This Clip has a volume envelope, shown as a red line graph superimposed on the waveform. Because this envelope existed before freezing, it has become part of the freeze. However, you can still generally add envelopes to frozen clips, as long as they are not for parameters that are frozen.

In most other music programs you would generally only consider freezing tracks that are completely finished and contain a recorded arrangement. This is most often at the mixing stage when you need more plug-in power. However, in Live you can do much more with frozen tracks, including creating and editing arrangements, and even playing live. Because each Clip in the session view is bounced separately, you can launch and stop Clips as normal in a frozen track. You can also copy and duplicate Clips and set up scenes.

The situation is slightly different if you freeze a track that already has an arrangement, as in the third audio track in the screen on the left. If there is already an arrangement at the time you freeze a track, this is bounced as well as the constituent loops in the session view. This ensures that any automation of parameters on instrument or effect devices is reproduced correctly on playback. You can edit the data that exists in the arrangement, but, because it is not loop-based, you can't trim out regions further than their original boundaries. However, you can drop in and record loops from the Session view over the top of the existing arrangement. 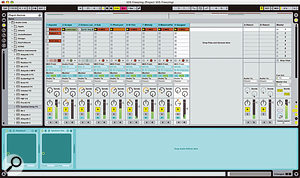 This synth-heavy project dropped from 62 percent to nine percent CPU load after all tracks were frozen.If you have any reverb or delay effects inserted on your tracks, these are bounced along with the Clips. There is a potential problem here, because the effect would normally be heard for a time after the Clips have stopped playing, but this no longer happens after freezing. For this reason, if you generally work in the session view, you should try to keep reverb and delay effects on returns, which will continue to work in real time after you freeze. However, if you are freezing a track that has an arrangement, Live is clever enough to get around the problem.

Looking at the bottom screen on the previous page again, red cross-hatched sections can be seen following the regions in track three. These are areas where Live has bounced the effect of reverbs or delays at the time of freezing. These areas behave like Clips in their own right. They are not automatically linked to the region that they are adjacent to, so if you make arrangement changes you need to make sure you select the effect tails that follow the Clips you move. It can, of course, be fun to move these temporary Clips around for special effects.

Live offers a further step you can take if you wish to commit a track to a finished audio arrangement. The Flatten command (Edit menu) takes any frozen track and replaces the elements in it with the equivalent bounced audio. Clips are replaced with new Clips that have any track effects and Warping printed as part of the audio. Anything in the Arrangement is also replaced as audio. However, region boundaries and names in the Arrangement are maintained, and you can still trim and edit the Arrangement. When you flatten MIDI tracks, all the MIDI Clips in the Session view and the Arrangement are also converted to audio. This means that the MIDI track is replaced with an Audio track. After flattening, all effects and instrument devices on the track are removed.

So why would you want to make this drastic move and lose the ability to go back and unfreeze the track? The answer is that after flattening, the track is no longer frozen, so you are free to add different effects, change track Warping, and so on. If you want, you can still keep a version of the frozen track and mute it, or keep it in a different saved version of the project.

Track freezing and the multi-core processor support that was also added in version 6 of Live make it possible to create really big synth-based compositions on quite modest computer hardware. For me, it's also great to be able to run some of the latest and most processor-hungry synths, such as Native Instruments' Massive and Reaktor 5, and the Arturia classics, without worrying about when everything's going to start grinding to a halt. The project in the screen above is running several instances of Reaktor, Massive, FM8, and d16's Phoscyon. Unfrozen, the CPU meter was peaking at about 62 percent on my G5. After I froze all the tracks it was just nine percent! Drop-outs and annoying jerky mouse cursors are a thing of the past — cool. 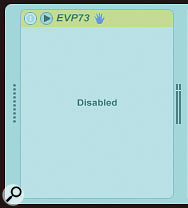 Freezing tracks allows you to play songs on a computer that doesn't have all your plug-ins. Freezing tracks has another important application besides reducing CPU load. Tracks which are frozen can be played on any computer running Live, even if the instrument and effects plug-ins used by the tracks are not present. This makes moving projects around or collaborating on songs very easy, provided that you remember to freeze your tracks first. When you open a project on a different computer, Live will warn you if some of the devices used in the song are not available. However, frozen tracks will continue to play back just as if the devices were there. You can then continue working on the project, including making arrangement changes to the frozen tracks. If you return the project to the original location, the plug-ins will be re-linked with the frozen tracks. Another option you have is to unfreeze tracks and replace the missing plug-ins with ones that are available. So, for example, in the screenshot shown here I could replace the missing EVP73 plug-in with another electric piano instrument, and work with the original MIDI Clips.