There's more to dynamics than compression and expansion, and now transient shaping is part of Sonar 8, courtesy of the TS64 Transient Shaper plug–in. 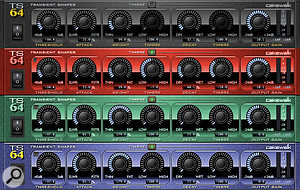 Like many aspects of Sonar, TS64's front panel can be customised.You've probably heard that Sonar 8 is out, and that it not only features tight integration with the V-Studio control surface and audio interface, but also major upgrades to the audio engine. However, as with every Sonar release, there are always hidden gems that might not catch your eye immediately, but prove to be important. Three additions that fall into that category for me are the TL64 Tube Leveler, the Channel Tools utilities, and the subject of this column: the TS64 Transient Shaper.

Although the idea of transient shaping isn't new, it's not a common processor to bundle with a DAW host. What's more, both TS64 and the TL64 Tube Leveler are not tied specifically to Sonar — you can use them in any host that accepts VST plug-ins. I've used them in Sony Sound Forge and Steinberg Wavelab, with excellent results.

A transient shaper is a dynamics processor, but unlike compression or expansion, it modifies only a signal's attack characteristics. As a result, the signal you run through it is crucial: if it doesn't have defined transients, TS64 won't do much — or, at worst, it could even add unpleasant effects.

While transient shapers are generally used on drums and percussion, anything with sharp, defined transients — guitars, electric pianos, synth bass, even some programme material — is suitable for processing by TS64. For example, using it on some electric guitar tracks I recorded with Roger Linn's AdrenaLinn (set for step-sequenced filtering) added an element that made the overall sound much more percussive. However, you can also use TS64 to soften transients, giving a less percussive effect that allows a sound to sit further back in a mix.

There are two main elements to transient shaping. The first is an input stage that detects transients, while the second is a shaping stage that acts on the detected transients. There's also a fairly conventional output stage with metering that lets you match gain between the bypassed and active states. Like other dynamics processors, the shaper applies gain changes to alter the signal's characteristics, but these gain changes are applied to the initial transient (and, in some cases, the signal immediately following the transient) rather than the signal as a whole.

Incidentally, note that TS64 is not intended as an insert effect but more for mixdown, because it has a considerable amount of latency. It has to look ahead, find transients, analyse them, filter them, and then calculate when and how to apply gain.

Three versions of the same transient. Left to right: without processing, with Weight at minimum (Thin), and at maximum (Fat).Let's look at the TS64 controls and how they affect the sound. They can all be automated, so the type and degree of transient shaping can change dynamically over the course of your music.

The Attack control ranges from 25 percent to 400 percent, with settings under 100 percent softening the transient, and settings over 100 percent adding a harder edge. However, settings that are even slightly over 100 percent can make a big difference. With the aforementioned AdrenaLinn tracks, a setting of 104 percent added an obvious percussive effect.

Regarding how the 'hardening' works, consider a signal with a slight attack. TS64 adds significant amounts of gain during the attack time, thus giving the illusion of shortening the attack time — but what's really happening is that the lower levels of the attack are made much louder. Increasing the Attack percentage can therefore also increase the output, causing clipping. Monitor the level setting carefully to make sure that any additional percussiveness comes from TS64, not from overloading the output.

I think of these as being related, as I usually go back and forth between them to find the right sound. Cakewalk's Active Controller Technology, which maps software parameters to hardware controls, comes in handy here: because TS64's parameters are mapped automatically to the ACT controls on the V-Studio controller (or other hardware controllers), it's easy to swap between two physical knobs to tweak the sound.

The Weight control can add a punchy effect something like that added by the 'Punch' switch on Kurzweil equipment, which itself was based on an article I wrote about the sound of the Minimoog. If you look at a Minimoog envelope, no matter how fast the attack and decay settings, there's a period of about 20-30ms where the envelope is at maximum level. Using the Hold parameter on ADHSR envelopes can produce a similar effect, and it's easy to confirm for yourself that setting the Hold time to zero gives a much less punchy sound. With TS64, the more you turn up Weight above 100 percent, the more it adds a sort of hold time to the attack. Settings below 100 percent thin out the sound. You can think of this as similar to compression that occurs only immediately after a transient.

The screen shot above makes it easy to see what's happening. The left transient has no processing. The middle one has minimum Weight; note how the waveform level drops off dramatically after the initial cycle. This gives a fast attack/fast decay sound. The transient to the right has Weight up full, which is why the two cycles after the initial transient are considerably louder. The result is a 'big attack' sound.

The Decay control increases gain during the end of a sound's decay. Compared to compression, turning up Decay would be like having a compressor that affects only signals below about 12dB. Like the Attack and Weight controls, Decay extends from 25 percent to 400 percent, with settings below 100 percent acting more like an expander and those over 100 percent bringing up the signal as it decays. This can be very helpful when you're trying to control bleed or room ambience with multi-miked drum setups.

Clicking on the Timbre button adds two more controls: Weight Timbre and Decay Timbre. These interact with the Attack and Weight controls, and although they seem simple, there's a lot going on behind the scenes. The Weight Timbre control adds multi-band compression-style processing, because the Timbre button splits the signal into three bands (low, mid, and high), using linear-phase filtering. Turning the Weight Timbre control determines which band will get the most weight (for example, with the Low setting, the low band gets more weight than the mid and high bands), but there is a continuous morphing from low to mid to high, so 'in between' settings allow Weight to apply to more than one band at a time. The Decay Timbre control acts similarly, but applies the multi-band concept to the frequency ranges subject to the Decay control. 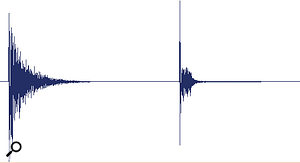 The snare on the left is unprocessed; the one on the right has been tightened with TS64.

The screen shot on the previous page shows some suggested settings for a big, ringing kick sound. I've set Threshold to -31.2, but this depends on the level of your drum track. I set it so that the TS64 would trigger on all but the softest kick hits. Setting Attack to 138 percent strengthens the attack, and a Weight Timbre setting of -43.2 makes the kick's lower–frequency component sound fatter. Decay at 199.2 percent extends the kick decay, which is the main component of the ringing effect, and to keep the sound as fat as possible, the Decay Timbre control restricts the additional decay to the kick's low end.

What if you want to thin out the sound, and turn a rock snare sound into something tighter and more suitable for dance music? TS64 can do that too; the top screen shows the snare before and after processing.

TS64 doesn't just emphasise attacks; it can de–emphasise them as well.

Synth bass is another instrument that's very well suited to processing with the TS64 Transient Shaper. Try these settings with a bass sound that's a bit too sharp and cutting, and they'll help to extend and smooth out the decay.

Being able to 'smear' as well as accent transients is another useful TS64 application: You can take a percussive instrument like tambourine, with a huge initial transient, and turn it into something that sounds more like a shaker or maracas. The key to the sound is setting Attack under 100 percent, but the other parameters are also important. The following settings make a tambourine less percussive and de-emphasise the highs.

To Shape Or Not To Shape

Don't make the same mistake with TS64 that people make with loudness-maximising plug-ins! Transient shaping can produce a very dramatic effect, but if you make the kick more punchy, you'll probably want to make the snare sound punchy too, but then the toms seem weak by comparison, so you want to make them more aggressive and so on!

In my experience, transient shaping works best with sounds that need to punch and stand out more, but don't benefit from traditional dynamics processing or EQ. For example, with synth bass, you can always boost the HF to bring out the existing transient more, but the shaper can actually change the shape of the transient itself. This can let you take a very synthetic-sounding FM bass and give it a more organic quality, or take an organic bass sound and make it sound more electronic.

Automation is also important. Automating the various controls, particularly Attack and Decay, allows an entirely different type of dynamics compared to compression — and one well–suited to today's heavy-handed mastering techniques, which pretty much obliterate dynamics based on level changes. By having dynamic changes based on timbre, it's possible to convey some sense of dynamics even with really squashed recordings.

Like many other Sonar instruments, you can customise the skins of TS64 and TL64. Go into your VST plug-ins folder and locate the Transient Shaper and Tube Leveler folders. In each there's a Resources sub-folder with .BMP files of the effect backgrounds, meter colours, and so on. For my own setup, I increased the contrast of TS64's background and coloured it red, making it stand out more. I also changed the Timbre and Detect LEDs from yellow to green.