Arranger Events on the Arranger Track can be triggered in real time.

Cubase’s natural home may be the recording studio, but you can also use it for on-stage improvisation.

Way back in SOS July 2010 (http://sosm.ag/jul10-cubase), I looked at the Arranger Track‘s primary function, which is to enable you to play through an existing project in a non-linear fashion. This is achieved by defining time-based sections of the Project Window called Events; they can be of any length, can overlap and, helpfully, can also be named (verse 1, chorus 2, bridge, breakdown and so forth). The Arranger Track then allows you to create ‘Chains’ that sequence these Events in any order you like (including repeats). You can define multiple Arranger Chains and can ‘flatten’ a Chain to create a conventional linear project if required.

The ability to experiment with different arrangements without the fuss of manual copying, moving and pasting can obviously be incredibly useful in the studio, but as the Arranger Track’s Events (song sections) can be triggered by key commands and/or MIDI events, it’s a really useful live improvisation tool.

The main screenshot shows an example project: I’ve added an Arranger Track and set up seven different Arranger Events that each define a musical section. Note that I’ve named the sections for ease of reference and have included a number in each name — more on that in a moment. 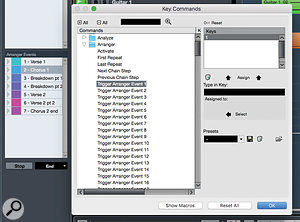 Key commands can trigger Arranger Events, with numbering based on the Event order in the Inspector panel.While you can see an Arranger Chain, it’s actually the lower half of the Arranger Track’s Inspector Panel that we’re most interested in. This lists each of the Arranger Events I’ve created. Internally (it’s not displayed in the GUI), Cubase numbers these Events from top to bottom (Arranger Event 1, Arranger Event 2 and so on), and I’ve made sure the numbers I’ve used in my Event names correspond to that numbering. Here’s why...

Having created some Arranger Events, open the Key Commands dialogue box and navigate to the Arranger section. You will see the options to assign key commands to as many as 20 different Arranger Events — and here they are all numbered according to Cubase’s scheme. My suggestion above to include numbered names for your Events makes it much easier to work in this section!

Now choose a suitable set of key combinations to trigger each Arranger Event. In the screenshot, I’ve used the number keys that correspond to the events, as they’re really easy to find on a QWERTY keyboard during a live performance. The downside, of course, is that some commands (mainly for tool selection) are already assigned to some of these keys by default, and you have to override these, though you could, if you wish, save different key-command preferences for studio and live use. How simple/complex you need your trigger Key Commands to be amidst the chaos of the average gig is something I’ll leave up to you! 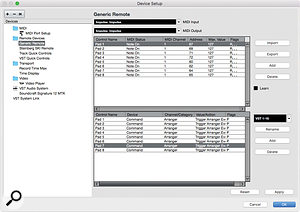 Triggering can also be achieved via an external MIDI controller.The Key Command option works a treat, but if you have a suitable MIDI controller — something with a bank of drum pads would be ideal — you can use this instead. In the screenshot example, the eight drum pads of my Novation Impulse MIDI controller keyboard are set up in a Cubase Generic Remote device, which is easy to configure: from the Devices/Device Setup menu, select the Remote Devices category and then hit the ‘+’ button (top-left) to add a new device. I selected Generic Remote and configured the MIDI in/out ports to point to the Impulse.

For clarity in the screenshot, I deleted all the default mappings and have simply created eight new entries, one for each of the eight drum pads. The MIDI Learn option can be used to link the Note On event from each pad to the appropriate entry in the top half of the dialogue. Note that I’ve also had to ensure that the R (receive) flag is set in the Flags column (click on the entry and a pop-up menu choice allows you to do this for each pad). 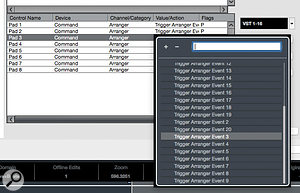 Commands can be specified for each controller via pop-up menus in the Device Setup dialogue box.In the lower half of the dialogue, I’ve set each pad to execute a Command (in the device column) and specified that to be an Arranger command (in the Channel/Category column). With this done, in the Value/Action column you’re given options to set each pad to trigger playback of up to 20 Arranger Events (exactly as for the Key Commands). All these settings can be selected by clicking in the appropriate cell of the table and choosing from the pop-up menus that appear.

Once you press Apply, all settings should become active, although it’s good practice to Export the settings to an XML file for safe keeping. If all has gone to plan, your MIDI controller should now cue the corresponding Arranger Event in your Project just as for the Key Commands. While my example used drum pads, you could just as easily dedicate a spare octave or two on a MIDI keyboard if that’s all you have available. Another option would be a dedicated MIDI floorboard if you like to keep both hands free.

Out Of The Loop

Whether via Key Commands or MIDI control, once you hit one of the physical triggers, playback of the corresponding Arranger Event will begin. Unless you trigger another Event, or stop playback, that Arranger Event will simply loop, which is great for extended bits of improvisation over your Cubase backing.

The Stop settings allows you to configure how quickly the next ‘cued’ Arranger Event takes over from the one currently playing.Exactly what happens when you trigger a further Arranger Event depends on the Stop setting (located at the bottom of the Arranger Track Inspector Panel). The default setting is ‘End’. In this mode, the playback of the currently playing Arranger Event will complete before any newly triggered Event takes over. This allows you to ‘cue up’ the next change and Cubase simply keeps everything in sync. There are other options though; in similar fashion to the Groove Agent plug-in, you can choose between 4 bar, 2 bar, 1 bar and 1 beat as the resolution for the switching.

There are a couple of practical points worth noting. First, given that the current Arranger Event will just loop in the absence of other instructions, it’s probably good practice to extend your ‘ending’ Arranger Event into a number of empty bars beyond the last note(s) played. This gives you a little slack to stop playback. Second, while triggering Arranger Events in this fashion means your live performance arrangements can be more fluid, it doesn’t provide you with a means of mixing and matching individual loops on the fly in the same way that (for example) Novation’s Launchpad does.

However, if you do want to take things up a level, you could always add a few ‘mute track’ MIDI controllers to your Generic Remote configuration, and control send levels, panning and plug-in parameters via MIDI too. For even greater control, you can then drop individual tracks in/out as specific Arranger Events are in playback.

Finally, it’s worth noting that your Generic Remote configuration is a system-specific setup. That means that you can load each project in your live set in turn as required, and your Arranger Event triggers will simply line themselves up numerically with the corresponding Arranger Events in each project.