Using The Malström Synth In Reason

The Malström device can certainly be used as a conventional synth, but behind its slightly bizarre green front panel lies a powerful graintable sound engine begging to be exploited to the full. We show you how.

Most software studios or sequencing packages now come with variations on subtractive 'analogue' synths, and also samplers. Reason, of course, has the Subtractor synth, and the NN19 and NNXT samplers. However, Reason also has a little gem of a synth that dares to break away from these common sound-generation engines. The Malström synth uses a complex synthesis method called Granular Resynthesis, but manages to package it in a way that makes it accessible to anyone familiar with more run-of-the-mill instruments. Learning to understand and control the Malström is well worth the effort for the new sounds you'll be able to create, but is also the perfect first step for anyone interested in learning about granular synthesis in general.

First off, the Malström synth looks a lot like any regular semi-modular soft synth or sampler. There are two oscillator sections, amplitude envelopes, filters, a filter envelope, LFOs, a 'Shaper' and signal-routing options. Much of the synth does operate in the same way as more familiar synths, except for the sound-generation method employed by the oscillators. In fact, by ignoring some parameters you can use the Malström as a fairly standard subtractive synth. Create a Malström and have a play.

The default patch is a simple sine wave. Clicking on the mini-display that reads 'Sine' in the Osc A section brings up a pop-up list of 'waveforms' (see screen opposite). I've put 'waveforms' in quotes because, as we'll see shortly, they are considerably more than just samples or waves. Anyway, if you choose Sine, Square or Triangle from the list and ignore the parameters marked Index, Shift and Motion, you can operate the Malström like a regular synth. However, choose any sound type other than these three basic waves, and you'd at first be forgiven for thinking that the Malström was loading up a sample or 'wavetable', something like what you'd find in workstation synths using the 'Sample & Synthesis' method. In fact, the Malström is a lot more sophisticated than that. 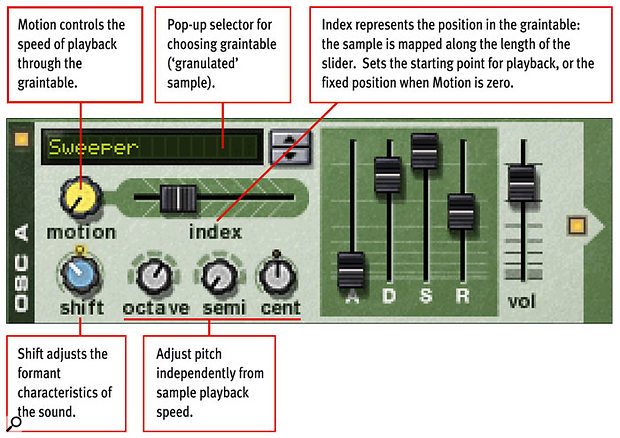 The controls of a Malström Oscillator section.

The Malström 's oscillators use short sampled waveforms that have been analysed, pre-processed and converted into a series of small sections (known as grains). These preset samples have some similarity to wavetables or samples, but as they have been 'granulated' they are called graintables. Each 'grain' of sound has some independence from the overall sample, which allows the granular synthesis engine to manipulate the pitch and speed of the sound independently. The best way to hear how the Malström works is to pick a graintable of a distinctive sample. If you follow these steps you should get a feel for what is happening and an idea of the possibilities of this synthesis technology. 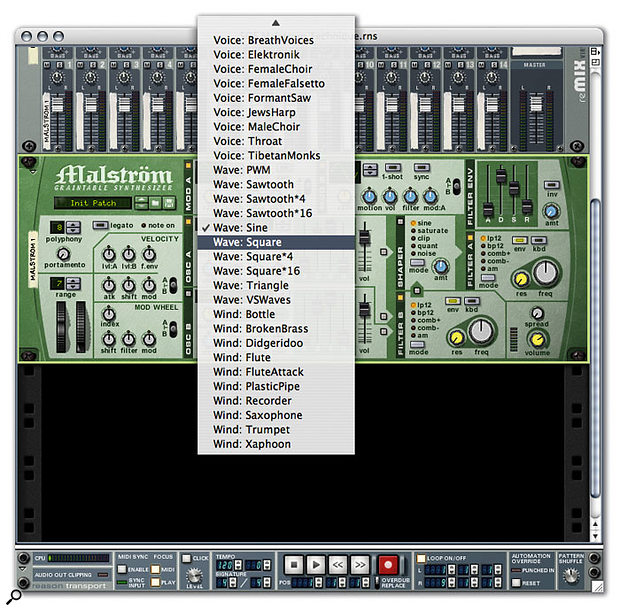 You may have noticed that when you pitch the oscillator up, as well as the speed staying constant, the characteristic 'chipmunk effect' associated with speeding up a vocal sample is not produced. An advantage of granular synthesis is that the formants in the sound (the resonant frequencies of a sound source that determine some of its character) gain a degree of independence from the parameters of pitch and speed. The Shift control adjusts these formant characteristics of the sound.

As you'll probably gather, Index represents the position in the sample, with the sample mapped out along the length of the slider. As you sweep the Index fader to the right, each tiny element of the sample is being looped in turn, re-synthesising the original sound in full at whatever speed you move the control. When Motion is at minimum, the Index control determines which grain is playing back, but with any other Motion setting Index determines the starting point where the graintable begins playback each time a key is pressed.

The Malström 's two oscillator sections both produce mono signals, and much of the time these are used to blend two different sounds together. However, there is a Spread knob in the bottom-right corner of the front panel that pans Osc/Filter A to the left and Osc/Filter B to the right. By setting both Oscillators to play slight variations of the same sound, then spreading them left and right, you can create really lush stereo patches. In the example patch above I've given nearly all the controls the same settings in Oscillators A/B and Filters A/B. Osc B is not routed via the Shaper, and the Shaper is off so as not to affect Osc A. The variation between the two sides is achieved by setting the two Index controls fractionally apart. This puts the two oscillators slightly out of step with one another (out of phase), and the whole patch suddenly jumps into a wide stereo spread.

To start using the Malström, you don't need to understand all these controls at once. You can just select the Oscillator waveforms and use these as basic starting points — as if the Malström were a sampler with a limited number of preset sounds. However, the fun comes from experimenting with the controls and seeing how they interact with one another, then bringing the LFOs ('Mods') into play to create movement and development in a sound. For example, the Index slider sets the start position in the loop, and Motion then sets the speed at which the loop is swept. However, if you start sweeping the Index slider itself, using Mod A, you have two interacting and competing parameters that introduce unpredictability into the patch. Alternatively, by turning Motion right off and using Mod A to control Index you can set exactly how the graintable plays back. The Mods have a huge number of wave shapes, enabling you to control the Index in slow sweeps, single directions, pseudo-random patterns, or rhythmically. The Single Shot button featured on each Mod only triggers the LFO wave once when you hit a key, allowing you to use a Mod like an envelope.

Some of the graintables provided in the Malström can be used in a fairly straightforward fashion, like samples — for example, the guitar plucks or the tabla hit. Others, such as the sweeps or FX sounds, are more like a small collection of diverse material all butted together. These graintables give you a chance to focus in and find new waveforms to act as building blocks for your patches. In the example patch in the screen above I've used the 'Sweeper' graintable as my starting point. When left to loop across its entirety, this sound sweeps through a number of harmonics and different shades. This is too busy and distinctive, so I've tried to pick out one small section. I've set the Motion control to 'Off', so that the graintable doesn't play or loop at all of its own accord. I've then set the Index slider to the point in the sample that I'm interested in. Lastly, I've set Mod A to sweep the Index by a small amount, so that I just get the bit I want looping. Although there's a limited number of graintables in the Malström, there are many smaller waves to be picked out using this method.

Bend It, Shape It

Once you've got to grips with the Malström 's synthesis engine, the rest of the instrument should be fairly easy to master. The filters and Mods (posh LFOs!) should be self-explanatory, but it's worth mentioning the switchable routing options and the Shaper module. The front-panel design employs arrows as a guide to where signals flow from one section to the next, and buttons designate whether a route is taken or not. For example, Osc A has arrows and switches for going into the Shaper and Filter B. Osc B can only go into Filter B (and then to the outputs) or directly to the outputs. However Filter B can be routed into the Shaper, so Osc B can get in via that route. The Shaper always goes into Filter A, which in turn goes to the outputs. Of course, once you have access to a bit of this kind of flexibility you always wish you had more. For example, it would be nice to have two shapers so that you didn't have to combine Oscillators A and B at this point, especially when routing in external signals (more on external signals in a moment). 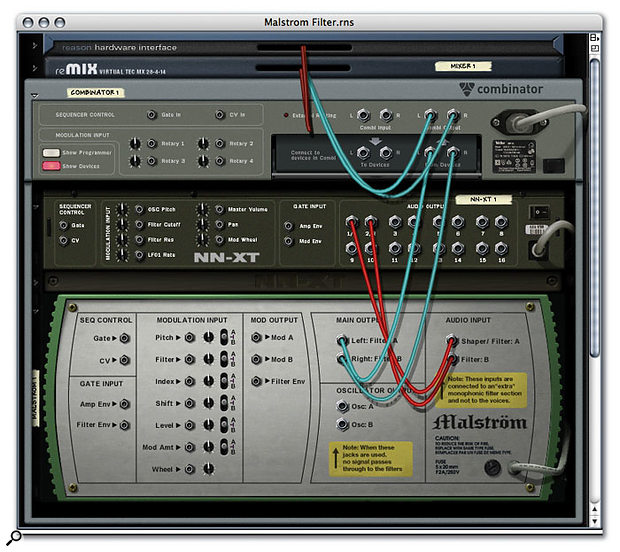 This screenshot shows the back panel of a Combinator patch in which a Malström's external audio inputs are being used to filter and shape an NNXT. The Malström's filter envelope can be triggered by the same MIDI notes that play the NNXT, or from a Gate input (which can be from the Malström itself!). The Combinator front panel can also be used to tie together the A and B filter controls for stereo operation.

You might say that the Shaper is a 'bonus feature' on the Malström, but it has become one of the distinctive-sounding features of the instrument, offering several different effects for distorting and smoothing the signals passed through it. My main advice for this feature of the Malström is to experiment, and don't go overboard with it, as it has a tendency to 'take over' the patch.

Given that the Malström has this distinctive Shaper section, plus a pair of really nice multi-mode filters, it's perhaps not surprising that Propellerheads added external audio inputs to the back panel, so that other Reason devices can be routed through the synth. The two inputs come into the Malström 's routing scheme at the same stage as Oscillators A and B. In other words, they are routed to the separate filters and only the first input goes through the Shaper. However, as with the Oscillators, Filter B can be routed back into the Shaper (which then takes the signal through to Filter A). This means that you can either send a stereo signal through and not use the Shaper, or use a mono signal and go through as many sections as you like.

There are a couple of tricks you can use to bring the Filter Envelope into play on external inputs. One is to connect a CV cable from one of the Mod outputs back into the Malström 's own Filter Envelope Gate Input and set a sync'd rhythmic trigger. More recently, Reason 3 allows you to combine the external device and the Malström into a Combinator (see screen above). A good reason for doing this is that the same MIDI note that triggers the external sound source can then trigger the filter envelope on the Malström at the same time. Finally, another good reason for putting the Malström into a Combinator is that you can assign a Combinator panel knob to control both Malström filters at once, keeping them linked together.

One feature sadly missing in the Malström is the ability to load your own samples. Because the samples used have to undergo analysis and processing to turn them into suitable graintables (and looping directions and points need to be set), Propellerheads obviously decided it would be simpler to provide a number of presets. However, there are other packages using granular synthesis that allow you to load in your own audio samples. Most notable are Reaktor, which features synths such as Triptoniser, Traveliser and Grainstates that employ similar techniques to Malström, and Kontakt, Native Instruments' sampler package. These can load audio from your hard drive and they take only a few seconds to 'granulate' the samples. With any luck, a future version of Reason may have a Malström with sample-loading capability and controls to adjust the necessary graintable properties, such as grain size and smoothing.