News of a new hardware DSP system from Waves, a mini-review of a keyboard sticker set for Pro Tools from Editor's Keys, the latest information on compatibility with Mac OS 10.4, and plug-in news.

Perhaps the biggest news for many Pro Tools users this month will be the announcement of Waves' Netshell APA processing units. These are hardware devices that let you easily run multiples of the most CPU-intensive plug-ins from the Waves stable. For example, the rackmounting APA 32 lets you run six IR-1 convolution reverbs, or nine Linear Phase Equalizers, or 12 C4 Multiband Parametric Processors at 44.1kHz. The APA 44-M is smaller and more portable than the APA 32, yet gives up to 30 percent more plug-in power, and the good news is that neither of the APA units requires a PCI card or a Firewire or USB connection. You simply connect them to a standard Ethernet port on your computer and install the new Netshell software, whereupon you will find that you will have the choice to run plug-ins on your normal system or on the APA. If you need even more power, you can add more units up to a maximum of eight APAs on one computer using standard Ethernet switchers and cables. You can mix and match the APA 32 and APA 44-M units within one system if you like.

You can easily take an APA 32 or APA 44-M to another system. Just plug in your Waves-authorised iLok, connect the APA unit to the computer's Ethernet port, install the Netshell software, and you will be able to use any of your authorised Waves plug-ins on that system.

The APA units are designed to take the load off your computer when running the most CPU-intensive Waves plug-ins — Waves say that for basic plug-ins like compressors and equalisers, the system overhead involved in routing audio to and from the APA unit would outweigh the tiny gain in CPU resources on the host system. The following plug-ins can be run on the APA 32 and 44-M: L3 Multimaximizer * L3 Ultramaximizer * IR360 Surround Reverb (Mac only) * IR-1 v2 Convolution Reverb * IR-L Light Convolution Reverb * Linear Phase Equalizer * Linear Phase Multiband * C4 Multiband Parametric Processor * Renaissance Reverb * Renaissance Channel (no external side-chain) * Sound Shifter * Morphoder * Trans X Multi * Q-Clone. For an introductory period, the IR-L convolution reverb and Q-Clone EQ emulator will be included free with each APA. The APA 32 will cost £1199 including VAT with the APA 44 retailing at £1799, and both should be available by the time you read this.

For a while now, IK Multimedia's Sampletank SE sample-playback plug-in has been included as part of the Music Production Enhancement Suite software bundle that comes with all new Digidesign Pro Tools HD and Pro Tools LE systems. It's now been upgraded to version 2, and existing registered owners of Sampletank SE can download a free update at www.sampletank.com/digist2free.html. Sampletank 2 SE has some new options and features, including three different synthesis and sample-playback engines for playable instruments and loops, and 32 high-quality built-in DSP effects. IK Multimedia continue to offer a discounted upgrade route to the full version of Sampletank 2 XL from the free version bundled with every Pro Tools system. Registered users of Sampletank 2 can also purchase a crossgrade to the company's Sonik Synth 2 for only $249, a saving of $150.

Make A Test Tone from Audio Ease (above) is a Mac OS X test signal generator that you can use to test your signal chain for distortion, aliasing, speaker defects, digital clock errors, crosstalk, cross-wiring and so on. It will also help you produce the classic test tones to precede programme material. Sine-wave tone generation ranges from simple test tones to precede a mix to flexible custom level, and frequency sweeps up to 192kHz. In the files, Audio Ease have an option to include a virtual announcer, 'Jennifer', who can speak introductions containing levels, frequencies, speakers and formats. In addition, Make A Test Tone can add markers in the sound files to indicate the exact frequency and amplitude at that point. 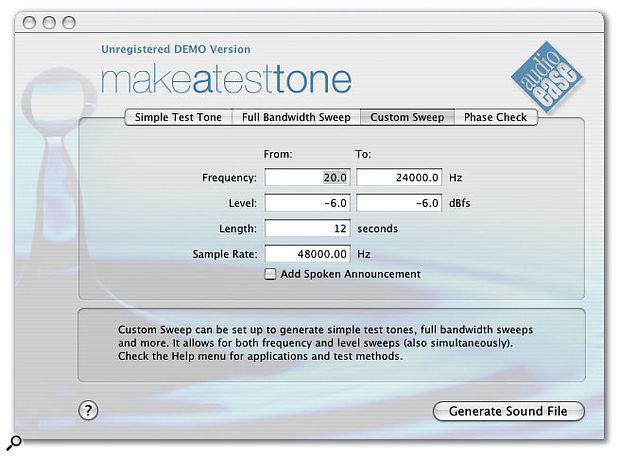 Audio Ease's Make A Test Tone is a Mac OS X utility that can generate test tones for many situations, including sine sweeps and signals to help you check the phase of your speakers.

Make A Test Tone also can produce phase-check sequences from stereo up to 10.2 formats. Jennifer introduces each speaker, after which its phase correlation is tested against the previous speaker. All your connections can be checked in under a minute! All files are native to Pro Tools, so they can be imported without conversion.

Audio Ease offered the first 500 downloads free, and nearly 100 went within the first minute! However, the full paid version only costs $29.95, and can be found at www.audioease.com.

The latest upgrade to Pro Tools itself, version 6.9.2 adds support for Mac OS 10.4 'Tiger' and is available as a free download for qualified users. Updater CDs will be available soon through Digi Store for £5.00 plus shipping and handling for those who are unable to download large files. At the time of writing, the version 6.9.2 software is available for Pro Tools HD and LE hardware systems, with a Tiger-compatible version of Pro Tools M-Powered due to follow shortly. For up-to-date information, visit the Digidesign web site. Digidesign Engineering and Test Services have also completed testing and qualification of Pro Tools TDM 6.9.2 with Mac OS 10.4.1, so that OS version is now listed as compatible along with Mac OS 10.4.

There have, however, been some issues with Pro Tools and Tiger. First, two of the key commands that Pro Tools uses to initiate recording are assigned by default to Mac OS 10.4's Spotlight and Dashboard features. In order to use these key commands for Pro Tools, the key commands for Spotlight and Dashboard must be remapped. To remap Command + Space, open System Preferences, select Spotlight and untick the box for the Spotlight menu keyboard shortcut, or click in the box and choose a different shortcut that doesn't conflict with Pro Tools. To remap F12, open System Preferences, select Dashboard & Expose, choose F12 from the menu next to the Dashboard item and pick another function key or select any combination of modifier keys and a function key.

Some users have also discovered that, in certain situations, the EQ III plug-in will not recall its settings at 192kHz sample rates: specifically, with a Q of ±2.0 and Gain of ±12db and High and Low bands set to notch (peak). Under these circumstances, the parameters will revert to 2.0 and 12.0 respectively after saving and reopening the Session. There is a workaround to help in the short term which is to use automation to set High, Low, Notch and Shelf settings to jump to their desired Qs and Gains at a point in the timeline before the song starts.

This month, I've been using a new keyboard sticker set for Pro Tools from Editor's Keys, which converts a standard QWERTY keyboard into a Pro Tools audio editing keyboard. Each key sticker is applied to your standard keyboard using their applicator, and contains the program shortcut, icon, key letter and also a text reference telling you what each shortcut does. The set is made up of 70 key stickers.

I found them very easy to apply and I much prefer the Editor's Keys set to the Digidesign set, for several reasons. Firstly the normal letters are in black and are much easier to see then the light grey letters on the Digidesign set, which is especially useful for those of us who can't touch-type! Secondly, some of the icons are in colour, and all are clearer and easier to understand. Finally, the size and shape of the Editor's Keys stickers mean they fit most keyboards, whereas the Digidesign ones depend on an extra text section to be fitted on the side of each key, and not all keyboards have sufficient space for this. The only shortcoming of the Editor's Keys key set is that they have missed out some of the key functions on the numeric keypad, notably '3' for record as well as the '+' and '-' Nudge keys and the '=' , '/', '*', '.' and 'Enter' keys.

At the time of writing, the Editor's Keys Pro Tools set is on special offer for £8.99 and can be found at www.editorskeys.com.

Drums On A Budget

A-Kit is a set of seven Mac OS X plug-ins designed to form a virtual drum kit. The plug-ins are RTAS-compatible and are triggered from MIDI tracks to play back the included sampled sounds. A 44.1kHz sampler is incorporated in each module of A-Kit. The total sound bank contains 45MB of samples, with up to 40 samples of each instrument. Each module of A-Kit can be inserted on its own track, allowing you to add filters, compressors and effects to each element of the 'kit'. The best bit is that A-Kit only costs 15 Euros.

TC Electronic have announced an update to version 2.0 of their Restoration Suite, which includes a new Dethump plug-in. This plug-in adds another feature to the Restoration Suite by resolving errors up to 12,000 samples in length without audible artifacts. Dethump is designed to eliminate low-frequency pulses that typically occur with strong impulse disturbances in LP recordings. With the new 2.0 update, Restoration Suite includes five real-time plug-ins: Descratch, Denoise, Declick, Decrackle and now Dethump, which can be used in VST, AU anf RTAS-compatible systems. The upgrade will be free of charge for existing users via the TC web site.

TC Electronic have also announced that System 6000 stereo plug-ins will now be available for Pro Tools HD, meaning that some of the most sophisticated algorithms around for mixing and mastering are finally available to the Pro Tools platform. In addition, they have unveiled a new reverb, the DVR2 Digital Vintage Reverb, which is an emulation of a well-preserved EMT 250.