Sonar doesn't have a variable speed control that affects an entire project — but with a few tricks, it can still do most of the common varispeed effects. We'll cover several options, but first let's define our terms.

The varispeed control on tape machines changed the pitch of a recording, but it also changed its duration: if you sped the tape up, the pitch became higher, the tempo faster, and the duration shorter. When you slowed the tape down, the pitch became lower, the tempo slower, and the duration longer. In the digital world, independent pitch and time stretching are possible, so you can, for example, raise the pitch while maintaining duration. It's difficult to do this without altering the fidelity, however, especially with significant stretching. Tape‑style stretching creates fewer artifacts and, for some applications, the pitch/time interdependence can be an advantage.

Unlike tape varispeed, this technique ultimately preserves duration when changing pitch. In addition to changing timbre, it's also useful when you can't quite hit a high note, and works with other instruments as well — pitching acoustic guitar up gives a bright sound, while pitching power chords down can be great for metal. Here's how to do this technique in semitone increments:

Now your vocal (or whatever you recorded) is brightened up, with unchanged duration and in tune with your track — although the formant changes may make some EQ desirable. You can use the same process, but with the premix transposed up and the new recording transposed down, to get clips to sound darker.

A common technique in pop music (especially for background vocals) was slowing down the tape, recording a vocal singing along with the lower‑pitched track, then returning the speed to normal. The song would return to pitch, but the vocal would be sped up and have a brighter character due to the changed formants. Sonar can impart varispeed effects to clips with an accuracy of 1 cent over a +/‑ two‑octave range, by using the Loop Construction window:

This approach has other applications, such as when you want to speed up a whole mix. With tape, final mixes were often sped up to give a brisker tempo and brighter sound. Open your stereo mix in the Loop Construction window, speed up as desired, then render the clip to itself.

Another application is when overdubbing out‑of‑tune instruments. Say you've recorded a song, and it's time for the piano solo. You take your laptop and some mics over to the pianist's house — but the piano is a tiny bit sharp. With tape, you'd speed it up to match the tuning of the piano, record the piano, then return the tape's speed to normal. Although using tape would alter the timbre, with small tuning offsets this isn't significant. With Sonar you follow the same procedure described above, except you would speed up the premix and slow down the piano track.

The octave‑higher 'chipmunk voice' effect was easy to do with tape, because you could usually slow down to half‑speed, sing along, then return to normal speed to transpose the vocals up an octave.

By not correcting for formant changes, using the transposition function by itself will do a pretty credible job if you simply transpose the vocal you want 'chipmunked' up an octave. But getting the 'authentic' effect of doubling the vibrato rate and tightening the phrasing takes a little more effort:

You now have two options. One is to open the vocal clip in the Loop Construction window, as we did in the previous examples, but this time transpose it up 12 semitones (don't forget to slip‑edit the clip to the beginning and then bounce it). But if you want to 'play' the vocal, use the following procedure:

You can also use Dimension Pro or Rapture to transpose up an octave, but I'd like to thank Cakewalk forum member Scook for suggesting SD3 — it's the easiest instrument to use for this application.

While it's not quite possible to perform a true tape wind‑down effect (the audio won't come to a complete stop), you can do continuously variable speed effects, in real‑time and with physical control — which is great for sound design and general sonic insanity. Here's how:

Your keyboard's pitch‑bend wheel will now do real‑time varispeed control over a four‑octave range (you can shift this range using the Transpose or Shift parameters as well). Invoke Lo‑Fi and other processing, and you have a sound designer's dream. Note that this technique also works in Rapture, but the pitch-bend range is limited in the both LE versions of both Rapture and Dimension Pro.

Transpose lets you change the pitch of a clip without changing its duration. 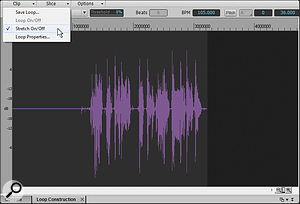 Here, an audio clip is being tuned up 36 cents in the Loop Construction window.