I like to do cover songs occasionally, particularly songs by British songwriter Mark Longworth. However, I think part of the reason I like his songs is because he doesn't agonise over production decisions: he uses an all-in-one recorder, lays down his tracks, semi-mixes them (he doesn't agonise over mixes, either), and generates an MP3. While I don't find it difficult to learn songs, I prefer that my covers be significantly different from the original — otherwise, why bother? The arrangement and tempo often change, and the key almost always changes due to different vocal ranges. And sometimes I even do something more of a remix, and use bits of his original MP3 file.

As a result, I like to transfer his songs into as fluid a medium as possible so I can experiment with them while creating the arrangement. There are no options for deconstruction or stretching because there are no individual audio or MIDI tracks, so I've developed a way of dealing with cover songs that work not only with his material, but other recordings too. The main constraint is that the process works best if the

When the measure markers match up with appropriate rhythmic peaks (shown in red for clarity) for the song's duration, you've matched the tempo. tune follows a constant tempo.

The key is using MIDI to block out the song, because it's so easy to change the arrangement. Once the arrangement is set, then I start replacing the MIDI tracks with audio or improved MIDI parts.

Even if the tempo changes, I at least like to start with the original tempo to see how it feels when playing to it. In theory, you can determine a song's tempo with AudioSnap by marking off a measure and invoking 'Set Project from Clip'. However, this doesn't really work for selecting part of a song as it simply creates a tempo change for the measure you marked off — this function is designed more for when you want to set the tempo after dragging in the first audio loop or clip.

Instead, I drag the MP3 into a Sonar track, and trim the beginning (if necessary) so it starts right on the beat. After listening to the clip, I turn on the metronome and adjust Sonar's tempo by ear to match the MP3 as closely as possible. After returning to the beginning and starting playback, eventually the metronome will lead or lag; this requires adjusting the tempo appropriately to compensate. Often it's easy to correlate the song tempo to Sonar's tempo by looking at the waveform to see if peaks (for example, kick drum hits) line up with measure markers. If the measure markers fall to the right of the beat, you need to speed up the tempo, and if they fall to the left, the tempo needs to slow.

When the tempo gets close, I go toward the end of the clip and do the final tempo tweaks so that the measure markers in the last part of the song line up with the waveform peaks. That way any drift is distributed evenly throughout the length of the song, and the metronome remains close to the original clip tempo.

If a lyric sheet isn't available, there's an easy way to transcribe lyrics if you have a control surface. Choose Project / Info to open a notepad, where you can write lyrics and additional song information. With the original clip soloed, I initiate playback with the hardware transport controls (keyboard shortcuts don't work because the Info file needs to have the focus), play back a line, hit Play to pause, then type the line. Hitting Play again picks up where the transport left off, so then it's time to enter another line, and so on until all the lyrics are entered.

As the cover version's genesis is MIDI-based, the first step is loading a multitimbral synth as a scratchpad. I use the TTS1 because it's CPU-friendly, which is important during the initial stages of working on a song because I can keep the latency low for recording guitar and virtual instrument parts. Another factor is that many of the sounds are quite usable, despite the plug-in's age. For example, I often use the 'Choir Ahhs 2' patch.

Many of Mark's songs have clever chord 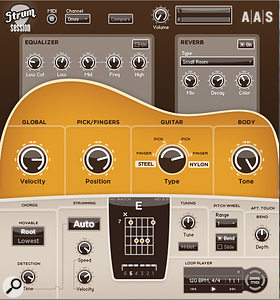 Strum Acoustic Session will read out the chords at its input. In this example, the notes correspond to E at the 7th-fret position. progressions — not just the usual tonic/fourth/fifth variations, and sometimes I do chord substitutions. So, to create a reference track I play chords along with the song on a MIDI keyboard, using a sustained sound that lasts the duration of the section with that chord. Basically, it's playing a pad that defines chord changes.

For these chords, I play only the tonic, third (major or minor) and fifth. Once the track notes follow the song, I quantise all the note attacks, insert the AAS Strum Acoustic Session plug-in instrument that comes with Sonar Producer, and copy the MIDI reference track to drive it. This isn't because I want strums (I turn down the track volume), but because Strum Session reads out the chord progression as the song plays. This is also why it's good to quantise the note attacks.

Given that I often try out numerous keys, I can just follow along with the chord readout after transposing it into different keys. You can also enter more complex chords, but for the purposes of mapping out the song, major and minor are usually sufficient.

Now it's time to mute the original MP3 reference clip, and this is where the real work begins. With the song playing back the chord progression from the reference track, it's easy to try different tempos and keys. To transpose, Select All notes with the focus on the MIDI track and then choose Process / Transpose. Specify the transposition amount (don't tick Diatonic Math) and click OK. Alternatively, with the MIDI track open you can Select All and shift-click-drag all the notes to a different key.

Take your time to make sure the tempo and key are exactly what you want, because once you start recording audio parts or adding tempo variations, it becomes much more difficult to make changes. Here are some additional tips that have helped speed up the process for me:

If you want to hear the results of my work, there's a YouTube video at: www.youtube.com/watch?v=jlorRI2jKTo.