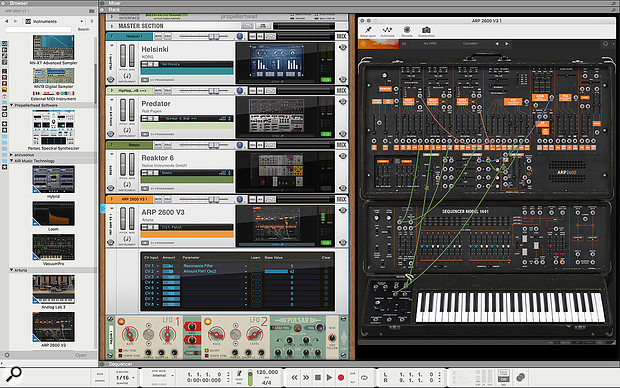 Screen 1: VSTis running in Reason — what a time to be alive!

Reason has finally embraced VST support. We tell you what you need to know.

“VST support in Reason? When hell freezes over!” begins the blog post from Propellerhead CEO Ernst Nathorst-Böös with his customary self-effacing humour. Well, whatever the weather in the nether, from Reason 9.5, we can use VST plug-ins in Reason!

I’ve generally been in favour of the Props’ decision to keep Reason a hermetically sealed environment, but it had been getting increasingly frustrating not being able to use other tools like Maschine and Komplete, MPC and favourite VST effects when working in Reason. And plug-in support has been the number-one user request for a long time. Now Reason can truly be a stand-alone, end-to-end music production platform.

Any Plug-in, Within Reason

The first thing to say is that you can continue to work VST-free in Reason if you prefer. But if you’re ready to dive in, you need to go the Advanced tab of the Preferences and check at least one of your VST Plug-in folders (screen 2). Normally it’s the root folder, rather than the one in your home user folder, that contains all your plug-ins. After this, if you go to Window / Manage Plug-ins you’ll see a list of all plug-ins available for use with Reason, and can choose to enable or disable them, individually.

The Props have integrated plug-ins into the familiar Reason environment as much as possible. VST Instruments appear in the Instruments Browser below all the Propellerhead devices, along with your Rack Extensions. Likewise, VST effects appear, sorted by developer, in the Effects tab. You add them to your project like any other standard device or Rack Extension, by dragging into the Rack from the Browser or right-clicking and choosing from the sub-menus. Adding insert effects to a mixer channel again follows the regular Reason convention: right-click on the channel and choose a plug-in from the Effects menu.

Each VST plug-in that you add to your project is hosted in its own rack container device (see screen 1 above), which is a bit like the Combinator device in that it maps audio and control connections between the Rack and the instrument or effect inside. To get to the plug-in’s user interface you click on the Open button (or anywhere in the display area above it) and the plug-in opens in a separate window like in any other DAW. Initially the rack displays and Browser palettes just show a generic ‘VST Plug-in’ label, but the plug-in window has a Snapshot tool that takes a picture of the plug-in in its current state. This is then used in the Browser and VST rack device whenever you use that plug-in, as in the screenshots here. 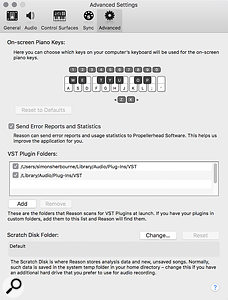 Screen 2: VST plug-in folders are enabled in the Advanced Settings. Leave everything unchecked if you wish to keep Reason running as before.The VST Rack device also has a file/preset manager section, which works slightly differently to other devices. The main load, save and up/down buttons work with the Browser, so you can save it as a Reason patch and hot swap with any device patch. This may be confusing as the plug-in itself will usually have its own presets, which are not accessible here. Instead, if the plug-in uses the standard VST bank and preset format for storing patches, you can click on the patch name display to the right and get a pop-up list of patches. Small up and down arrows will also appear in the name area allowing you to step through presets. Many plug-ins now use their own internal preset manager interface. With these plug-ins you might be able to see the name of the current patch but not change it, but you’ll have to open the plug-in window to choose patches.

The VST Rack device has stereo audio inputs and outputs on the main part of its rear section that are auto-cabled in the normal way, depending on whether it’s an instrument or effect. A VSTi will get it’s own track in the sequencer and be connected to a fresh mixer channel, just like the built-in instruments. Further connections are reached by unfolding the CV Programmer at the bottom of the device, providing up to a total of eight inputs and 16 outputs (screen 3). Audio ports that are actually available in the plug-in light up green. 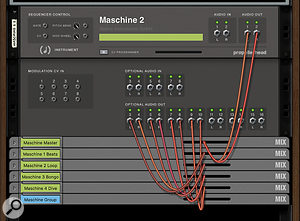 Screen 3: Reason supports VSTs with multiple audio connections via the extended rear panel.The extra CV connections allow you to control and modulate plug-in parameters from other Rack devices. As with Combinator or Mix Channel devices, there’s a Programmer panel where you can map the CV inputs to any automatable parameter on the plug-in. These can be assigned via a drop-down menu, or by activating the Learn function and clicking on a parameter directly. You can adjust the modulation depth with the bi-polar Amount knob, and set a Base Value, which defaults to the current value.

The VST device doesn’t have any direct controls beyond the usual pitch and mod wheels. However, if you want to make any of a plug-in’s key performance controls accessible from the front of the rack, you can put it inside a Combinator. The Combinator Programmer can ‘see’ all the parameters on the plug-in, so you can map some of them to the four knobs and buttons (screen 4, below).

Luckily, automating a VST plug-in doesn’t require you to set up any of these things. You can simply drop the plug-in’s track into record and tweak its controls in real time from the plug-in window. This will create new Sequencer lanes for those parameters and record your movements. If you need to create lanes ahead of time, perhaps because you just want to draw or copy automation instead of performing it, you can click Automation in the plug-in window’s toolbar, then click the parameter you’re interested in. 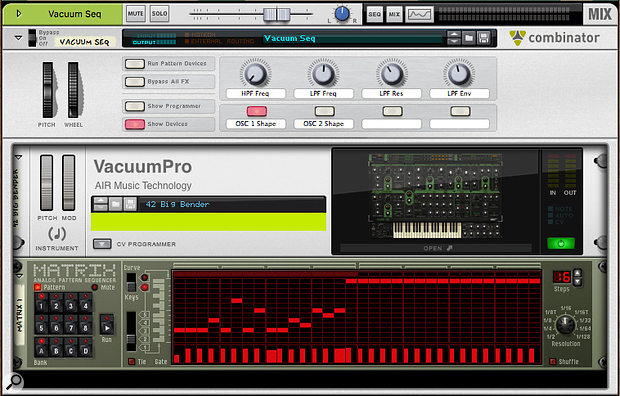 Screen 4: VSTs interact with other Rack denizens via their own special Rack container. Here a VST synth is combined with a step sequencer, and some of its key controls are exposed on the Rack panel via a Combinator.

Once I’d figured out how VSTs had been implemented I was keen to try out a few things to see what’s possible. For example, I was keen to know if I could use other hosts like Maschine, Komplete Kontrol and MPC inside Reason, and what would be possible with Reaktor. No doubt we’ll return to some of these in depth, but here are some titbits...

As far as I could tell, Maschine worked perfectly, synchronised with the main Reason transport and Sequencer and had no annoying keyboard input conflicts. I was surprised and pleased to find that audio clip drag and drop into audio tracks worked without a hitch! Maschine Groups assigned to Ext outputs appeared at the audio output on the VST Rack device. However, it’s not possible to play separate groups from multiple MIDI sources in Reason. A common setup in other DAWs with multitimbal plug-in like Kontakt or Maschine is to run a single instance feeding multiple tracks, then trigger it from multiple MIDI tracks. In Reason though, MIDI tracks are always tied to a specific Rack device and there’s no mechanism for routing MIDI. But I’m not complaining, it’s already doing much more than I could have hoped for in this first version.

This really is the start of a new era for Reason, opening up a world of new sound sources and production tools. The update to 9.5 is free for version 9 owners; if you’ve been holding off upgrading from an older version, now’s the time.

I’m glad to say that VSTs do not replace Rack Extensions, something the Props have been at pains to reassure RE developers about. Rack Extensions have several advantages over plug-ins, and not just in terms of stability and efficiency, which have been a priority for the format. A Rack Extension’s user interface appears right on the device in the rack, requiring no separate window. It can have CV outputs, multiple pre-routed audio and CV connections, and you can patch into it directly from other Rack devices without manually mapping CV ports to parameters. Presets are standardised and integrated into Reason’s Browser. Also, RE devices can be included in MIDI Remote codecs for automatic controller mapping.

There’s a level of convenience with Rack Extensions compared to generic plug-ins because the licensing is handled centrally and tied to your Propellerhead account. One of the things I like about firing up Reason is not having to connect my iLok, wait while plug-ins are scanned, or try to fire up a plug-in only to get a message that it’s not authorised. Similarly, RE updates are all in one place, so you spend less time on administrating various instrument and effects packages. There’s quite a few instruments and effects that are exclusively available as REs, but it is going to be interesting to see how cross-platform products fare. For example, I use the VST versions of McDSP’s Futzbox and Softube’s TSAR Reverb on nearly every project in other DAWs, but haven’t bought the RE versions. Perhaps I’m less likely to buy them now that I can use the VSTs; or maybe if VST support means I’m finishing and mixing more projects in Reason then I’ll be more tempted to buy the native Reason versions?