Up To The Wire

Thanks to Sonar 64-bit operation, the 14-year-old ReWire protocol is back in the limelight!

It's hard to believe that the ReWire protocol — developed jointly by Propellerhead and Steinberg — was born in 1998. For Sonar users, over time the Sonar/Reason combination became very popular, as Sonar didn't have a robust complement of virtual instruments, but had great audio recording, while Reason had superb virtual instruments but no audio recording or ability to accept plug‑ins. 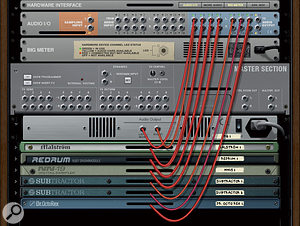 This screenshot shows the outputs from a variety of Reason instruments being patched directly to the Audio I/O. These channels appear in Sonar as individual outputs for the various instruments.When Sonar went 64‑bit, it offered several performance advantages, but ReWire was no longer compatible. Your choices were to install Sonar as a 32‑bit application, or forego ReWire. And as Sonar evolved to offer a wider range of virtual instruments, and with VST instrument plug‑ins becoming more plentiful and affordable, the need to use Reason wasn't quite as urgent anyway, so ReWire sort of faded from view for 64‑bit Sonar users.

Fortunately, Reason 6 brought ReWire into the 64‑bit world, Sonar X1d added 64‑bit ReWire compatibility and, once again, it was 'game on' for ReWire fans — particularly because, while waiting for 64‑bit ReWire to become reality, Reason had added several new and useful instruments.

Having read in several forums that people had difficulty getting 64‑bit ReWire to work, I thought it would be worth investigating how ReWire is dealing with a 64‑bit world. Happily, I've found that 64‑bit ReWire works solidly and reliably, providing you set it up and use it correctly. So whether you're just getting into ReWire for the first time or re‑visiting it after a long hiatus, this article (based on using Sonar with Reason) is for you.

As the host ReWire program, Sonar directs MIDI data towards Reason; digital audio streams from Reason into Sonar's mixer, and Reason adopts the host tempo. The transports for both programs are sync'ed, so looping in one program loops in the other. By the way, it's a myth that ReWire requires considerable computer power; it hardly loads the CPU at all, although there is a performance hit from running two programs at the same time.

Before opening Reason, always open Sonar first. Then, choose Insert / ReWire Device / Reason. When the 'Insert Soft Synth Options' dialogue box appears, decide if you're going to run a two‑track mix of Reason into Sonar (tick 'First Synth Audio Output') or use individual audio outputs (tick 'All Synth Audio Outputs', either Stereo or Mono) so you can process Reason tracks with Sonar's plug‑ins and ProChannel. 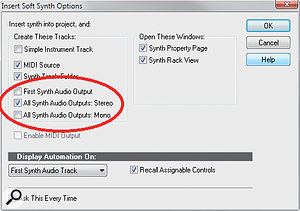 If you plan to insert Reason as a ReWire device because you've already composed something in Reason and want to send a mixed output, or you don't want to deal with patching synth outs to the Reason Audio I/O, choose 'First Synth Audio Output'. If you want separate outputs for each Reason soft synth, choose 'All Synth Audio Outputs: Stereo'.

Regarding whether to choose Stereo or Mono, Reason's 64 outputs treat stereo as dual mono. In other words, a stereo Reason instrument output requires outputs 1+2, 3+4, 11+12, 63+64, and so on. So, essentially, Reason's 'hardware interface' has 32 discrete stereo outputs. Choosing Mono in Sonar for the individual outputs doesn't make much sense, as it creates two mono channels — channel 1 left, channel 1 right, channel 2 left, channel 2 right, and so on — yet only one of the channel pairs matters, so choose Stereo.

Sonar will create 64 stereo tracks, which can really clutter your screen. The first thing I do is hide tracks 17 through 64 (click on track 17, then shift‑click on track 64; right‑click on the collection of tracks and choose Hide Track), as I seldom need more than eight stereo outputs from Reason. If you end up needing more tracks, type 'H' to call up the Track Manager, and enable the additional tracks you want to use. 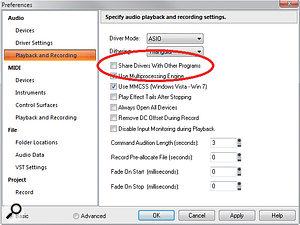 For a painless ReWire experience, make sure you untick 'Share Drivers With Other Programs' under Audio Playback and Recording in the Preferences menu.

Next, go into Sonar's Preferences and, under Audio, Playback and Recording, untick 'Share Drivers with Other Programs'. This is very important, because otherwise if you click on Reason to tweak it, Reason will grab the driver and you'll lose audio output from Sonar.

Assign Sonar's MIDI input — not Reason — to your MIDI controller (you needn't be concerned about Reason's MIDI settings, as ReWire handles that). Sonar creates a single MIDI track for driving Reason; its output drop‑down menu should go to Reason, while the channel drop‑down menu lists all available Reason devices.

After Reason was integrated with Propellerhead's Record, inserting an instrument in Reason simultaneously inserted a Mix module so that the instrument could feed Reason's internal mixer. This mixer output goes to a Master Section, which feeds audio I/O module outputs 1 and 2. As a result, even if you create multiple tracks in Sonar, everything will feed into the main Reason mixed output (Mix L/Mix R in Sonar), because that's where Reason's mixer terminates.

ReWire is very flexible, and there are two main ways to exploit it.

• Reason as a self‑contained program: In this scenario, you do some or all of your production in Reason, which you then blend in with Sonar. For example, suppose you create a composition within Reason on your laptop, and you've mixed it down to a great rhythm track using Reason's internal processors and mixing capabilities. Rather than trying to recreate that in Sonar using individual outputs from Reason, you can just choose 'First Synth Audio Output' when you insert Reason, and feed in the stereo outs. Then, in Sonar, you can start recording additional audio tracks, insert VST instruments, and use a controller such as the V‑Studio for mixdown.

• Reason as a synth rack: This option basically treats Reason as what it was prior to the integration with Record: a collection of virtual instruments (and effects) you could use as a virtual synth rack with Sonar. In this case, you can simplify the Reason setup considerably if you're willing to do a little rear‑panel patching in Reason, and take advantage of the multiple outputs.

When using Reason as a synth rack, before inserting any instruments you should delete everything in the rack except for the Hardware Interface and Master Section. When you create an instrument and Reason creates an accompanying Mix module, right‑click on the Mix module and choose 'Delete Devices and Tracks'. After the Delete Device Group dialogue box appears, click on 'Delete Selected Only' to remove the Mix module without removing the associated instrument. Now you can patch the instrument output directly to the desired Audio I/O section Audio Output, which terminates in Sonar (of course, you can also patch it through one of Reason's effects first).

When you insert Reason, you have the option to tick 'Synth Track Folder', which places the MIDI source track and audio outputs in a folder. However, after setting up the instruments and tracks over the course of creating a piece of music, I find it helpful to place stereo outs (for example, outputs 3+4 being fed by Malström), with the individual channels panned left and right, into a track folder. Eventually, all the instrument tracks end up outside of the original folder and in their own folders, with their own track icons, and the MIDI source track directly underneath. This keeps the Reason tracks both organised and grouped. 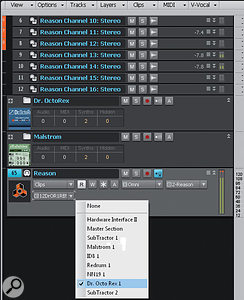 You can place track pairs from Reason instruments into track folders, with the tracks panned oppositely, to help organise your Reason tracks.

Note that in the Sonar source MIDI track, you can use MIDI controllers to automate parameters within Reason. However, as Reason can't connect to a control surface when ReWired (unless it's on a different MIDI port than Sonar), that complicates the MIDI 'learn' process when trying to tie parameters to controllers. However, Reason controls have default controller numbers and you can simply create automation in the Sonar track that's appropriate for the parameter you want to control.

Reason's documentation includes a MIDI implementation chart that correlates all automatable parameters to MIDI controller numbers. Look in the Reason program folder, then open the Documentation folder. In the folder that shows the language used for installation, you'll find MIDI Implementation Chart.pdf. And, of course, you can also use track automation in the audio tracks to automate levels, panning, and the like. Welcome back, ReWire!