The French policeman is at my car window. He is shining a torch directly into my face and his other hand is resting firmly on the gun in his holster. He has stopped me and my friend late at night on a motorway in South Central France.

"Do you have more than ten thousand Euros, cash, in the car?” he asks.

"Where are you going?” he asks.

This is a tough one. We genuinely haven't decided our destination at this point, so my driving companion (who, incidentally, is black) answers "Monaco” at the exact same time that I answer "Alicante”. The gendarme looks seriously unimpressed.

His face is quickly turning from suspicious disapproval to mild delight at the realisation that he has absolutely just caught a couple of drug lord kingpins.

"What job do you have?” he asks with a slight smile.

We both know the answer to this one. 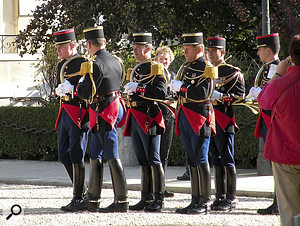 "Traffic duty doesn't pay, mes amis. If we want to earn some real money, we must play brass arrangements of the theme from Trisha.”"GET OUT OF ZE CAR!” he barks.

From Bass Line To Breadline

Being body-searched by three armed men by the side of the road, while a fourth is busy pulling the carpets out of the boot of the car, I reflect that there's a reason why most parents hope their kids will grow up to be vets or doctors. The idea that music might actually be a successful career option strikes many, including the French police, as wildly implausible. In fact the standard assumption is that if you make music for a living, you are really only one bad gig away from not being able to feed yourself. As the jazz drummer Mel Lewis once said, "I found that to really make money, you had to give up music. So I gave up money.”

However, a recent economic report published by USA Today revealed that Composition and Musical Direction was the third fastest-growing job sector in America, having enjoyed 178 percent growth in the past 10 years. According to this report, the median annual pay for a composer is apparently $47,350. The ever-more-diverse range of media outlets — film, TV, radio, web, advertising and so on — have all driven the desire for original music.

Media composition is often seen as the slightly embarrassing family member sitting at the musicians' table, and as a media composer, you quickly become accustomed to the way people usually react with a stifled smirk or outright derision when you tell them about a kids' show you are proud of, or a daytime quiz programme you scored that did really well. Most people (and I'm including many professional musicians here) find it hard to even imagine that dedication, professionalism and artistry goes into any media forms they personally don't take seriously or find cool. Nobody who ever picked up a guitar as a teenager dreamed of the day when the producers of a toilet paper advertising campaign would call them up for some music — and as one of the people in the market for receiving such a call, I'm completely comfortable with this. Every musician who wastes his or her time hoping to become a famous rock star is one less that might be asked to submit a demo to a celebrity reality show that runs in primetime for a decade.

What's more, music is heavily trend-driven, and as such, is always in need of an update and a refresh. I've lost count of the number of times a production has got in touch because they need an original soundtrack and are sick and tired of the same library tracks being over-used on numerous programmes.

It's like the computer companies that drive built-in obsolescence by changing their peripherals and OS every few years, forcing you to continually update. They've figured out the same secret as the people behind the TetraPak empire or the makers of disposable razor blades. If you want to make some serious money you need to sell people something that they throw away.