This month’s Notes From The Deadline is brought to you by former DJ, apprentice sound engineer and guest columnist Terry Trihard.

First of all, you need a showreel. I’ve taken a load of clips off YouTube and dubbed my own soundtrack onto them. The first one is about 20 minutes long and shows off these sick new breakbeats I got off The Pirate Bay. You’ll hear how my favourite style of music is the big film scores by guys like Hand Zimmer and Enrique Morricone and all those Euro composers sticking it to the Americans. I love that. So I’ve used some cut scenes from a few different PlayStation games, stitched them together and added my magic. TV producers love drama, so you can tell how the kick-ass drums and stabs and that all really take off when that zombie’s head explodes. See that? Took me ages to sync that up in GarageBand. Pretty bitching, huh? 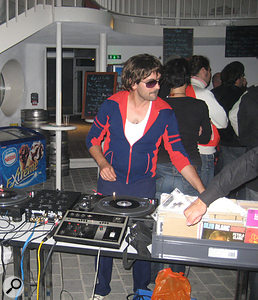 “Those TV executives in their air-conditioned offices, what do they know? They’ve never played a prestigious headline slot at the swimming pool cafe in their lives.”

I’m trying to get some momentum by tweeting a link to my video to the people at the different TV channels. I’ve got three commissioning editors I follow, Simon Cowell, the bloke off of Chemical Brothers and the BBC. I tried sending some of my music to producers lower down the food chain, but it’s all who-you-know bollocks innit at that level. They all hang out in one pub in Soho don’t they, and you have to get the right one drunk to get your foot on the ladder in this game. I sent out 50 CDs to as many TV companies as I could think of and the only reply I got was from a company that do fishing videos, and they said my work wasn’t “what they were looking for at the moment”. These twats have got cloth ears the lot of them. That was solid gold stuff I sent them. It had a load of wicked loops from the libraries I got from that torrent site and the only ones I couldn’t get to work needed a EyeLock or something. Big software corporation bullshit trying to restrict the use of soundware for the creative community. Fair use I say. If they didn’t want people to pirate their stuff they shouldn’t make it so expensive.

I’m getting well into the analogue sound these days. It’s so much better than the digital shit. Daft Punk’s last album didn’t use any computers at all, it was all played live and using vinyl. Old-school is the best so I sold my Mac and spent two grand on a sweet stereo compressor thing. It just makes everything sound sick. Trouble is they never listen to your music on decent audio systems in telly do they? And if they like it you have to be ready to make changes. I heard of one composer who had to change his theme tune three times before the idiots at the TV channel were happy. Can you imagine dealing with that kind of grief? People who know nothing about music telling us what to do? Not me. If it doesn’t grab them first time then I walk away. As artists, we can’t let people making some shit daytime show push us around and stick their oar in areas they don’t understand. Working the decks in nightclubs taught me that.

So I’ve got all the gear I need to do the gig, I’m getting together some strong online contacts in the business, I’m growing my online presence with my own Facebook fan page and I’m well up for it. All I need now is some of these twats to call me back with a decent big-budget drama or TV movie or something and I’m set. I’d even consider doing music for some commercials to tide me over.

But most importantly I’m not going to compromise my art. Because ultimately it’s all about the music, isn’t it?