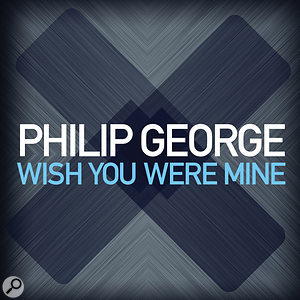 ‘Wish You Were Mine’

It’s a very efficient kick sound this, with plenty of welly and attack, yet mercifully free of the fatiguing HF spike that afflicts many a house ‘choon’. Critical to its success, I think, is that there’s a good deal of attack in the 700Hz region (that kind of ‘bouncing a basketball’ frequency!), which means the kick doesn’t need masses of upper–spectrum energy to cut through the mix. This is great, because it leaves regular on–beat gaps in the frequency spectrum in which our cute little Stevie Wonder Munchkin can strut his stuff, and also makes for better contrast against the noisy HF pumping effects first heard at 0:55 and the rather lovely delicate synth arpeggiation which enters at 1:10. Mike Senior 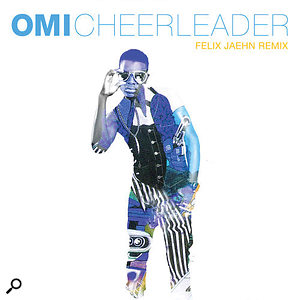 The vocal effect in this song is an unusual one, with the right channel delayed 30–40 ms behind the left. Unlike a shorter ‘Haas delay’ patch, which would tend to smear a sound’s image across the stereo panorama in rather a diffuse way, in this situation the delay produces something more akin to artificial double–tracking. However, the similarity of the two signals means that there’s still some vestigial precedence effect in action (whereby the later signal is interpreted as an echo of the first, and therefore fuses with it perceptually), so that even though the two channels have similar vocal levels when soloed, the left–channel voice still dominates slightly in stereo.

The widening effect over loudspeakers is pleasant enough, but it’s over headphones that the fake double–tracking really makes an impact. On cans, anything hard–panned always stands out a mile from the mix, which makes this song’s lyric transmission and general ‘wow’ factor pretty impressive for stereo headphone users. There’s no loss of vocal level for earbud sharers listening one–sided either, although the right–earbud listener might be forgiven for thinking that the singer’s timing is a tad sluggish. The big downside of any hard–panned lead–vocal doubling, however, is that the singer’s level drops significantly in mono listening situations, a loss of definition usually compounded when short delays are involved by chorusey comb–filtering effects between the direct and delayed sounds as they’re summed. In this particular scenario, though, the separate vocal signals already sound like they’ve got a little chorusing applied to them, so the tonal change in practice actually seems less dramatic than I’d initially feared. Quite a nifty workaround, that. Mike Senior 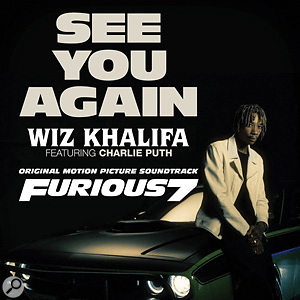 The first thing I noticed about this single was the poor mono–compatibility of the opening piano, the mid-range frequencies which seem at least 3dB quieter in the stereo Sides signal than in the Middle signal. The most likely explanation for this would be that they used a wide–spaced stereo mic technique during recording, and then panned those mic signals hard to the extremes at mixdown. Mind you, it’s hardly the most imaginative piano part, so I don’t reckon single–speaker listeners are losing out too much...

Moving on, the interaction between the main beat and Khalifa’s rapping is also worth noticing. The drums almost have a hint of Big Beat to them, and the crunchy snare details funnel quite a lot of energy into the 3–4kHz ‘presence’ zone, which gives the beat as a whole a hard–edged, forward sound. This kind of spectral emphasis on the drums sometimes causes people mixdown difficulties by masking the presence frequencies of lead vocals, thereby dulling the vocal tone and pushing the singer unacceptably far away from the listener. To avoid that here, the rapper’s vocal tone seems to have been designed to rely more on upper–octave ‘air’ frequencies for tonal clarity, rather than hitting the 3–4 kHz area too heavily, while his position in the mix balance remains secure because of a commendably solid contribution around 1kHz. Mike Senior

‘Hold Back The River’ 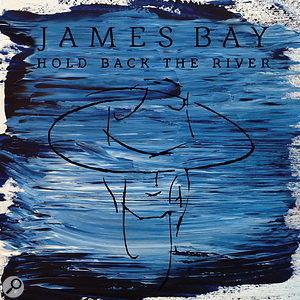 James Bay is an artist whose voice is clearly his trump card — rich, ragged, and expressive in equal measures. However, credit for the vocal interest in this single should also be given to the vocal arrangement, which has a number of ear–catching features. My personal highlight is the second chorus (1:29), where the high falsetto line takes centre stage, but with support not only from head–voice doubles at the octave below, but also from a distant chorus of yelled doubles at the unison. This is an odd effect, but enormously effective in context, because it implies there’s a rabble–rousing chorus approaching over the horizon, but doesn’t bring them close up until the following chorus. Slow–build songs like this can be notoriously difficult to mix, because it’s so easy to run out of steam too early, leaving later choruses sounding anticlimactic. Manipulating the long–term dynamics through vocal arrangement is a key part of this production’s solution to that perennial problem. (The band arrangement plays a part too, of course, with a clear increase in guitar drive and drum ambience for the final chorus compared with the second.)

What also struck me about this arrangement was the way the opening guitar riff’s basic melodic contour saturates so much of the song: in the guitar intro/outro and accompaniment for both verses; in the verse vocal melody; in the parallel–motion bass line which joins it from 1:00; and in the wordless backing–vocal bridge that follows the second chorus (1:57). The danger with using one melodic idea so heavily is that it can feel laboured, but James Bay combats that here by working his vocal phrasing progressively more freely around the basic guitar riff, teasing the ear with his continual excursions and returns. This technique (which ethnomusicologists call heterophony) is much more prevalent in traditional non–Western music, but this song demonstrates that it clearly still has much to offer modern chart artists. Mike Senior 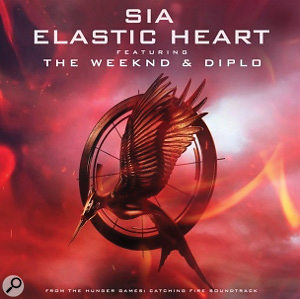 It’s not often that a bona fide mix–translation howler makes it onto the hit parade, but this production’s the real McCoy — when it came up on BBC Radio 1 during my mid–morning cuppa I honestly worried that my little kitchen radio had malfunctioned! The reason? When the chorus arrived the lead vocals (carrying the song’s title hook, no less) suddenly took such a dive in the mix balance that I struggled to make out what she was singing at all. Ouch!

Investigating this further in the studio, it became clear that this was partly because my kitchen radio is one of those Pure digital things, with a single speaker, and Sia’s super-wide multi-tracked vocals in that section are seriously mono–incompatible. I’d wager that they’re not just hard–panned either, but have some kind of phase–based widening effect applied to them as well, because they seem to reach significantly beyond the bounds of the normal ±30 degree loudspeaker panorama. But that’s not the whole story, because such poor small–speaker translation is also a question of timbre: the chorus vocals here rely rather too heavily on the upper two octaves of the spectrum to hold their place in the mix, and these frequencies are often shadowed and/or absorbed in typical home/office listening situations — in my case by a box of tea bags, as it happened!

Mind you, if you press the mono button while listening to this mix, it’s not just vocal losses that you’ll hear. There seems to be a stereo piano part in the chorus (as likely as not recorded with a wide–spaced mic pair) which fares little better in stereo than the vocal, and the drum ambience folds in on itself spectacularly too, gutting the mix’s mid-range in a rather ugly way.

The impact of these factors is so dramatic that the mono mix sounds a lot worse than either the left channel or the right channel on its own. Dandy for those earbud sharers, but surely at an indefensible cost to mono listeners. Mike Senior

This wedding favourite was one of Twain’s biggest hits and showcases the talents of über–producer Robert John ‘Mutt’ Lange at his slickest and most mainstream. From a sonics perspective what really impresses me with this mix is the magnificent low end, with its lightweight, almost diffuse kick–drum sound adding just the right amount of definition to the understated yet warm and utterly dependable bass–guitar line. The low mid-range is also a thing of beauty, not just in terms of the way the lead vocal warmth is so wonderfully controlled, but also because of how the backing arrangement and mix sound have both been carefully hollowed out in the lower mid-range to allow so much vocal warmth to come through, despite the airy pop/country mix tonality overall. I also suspect that controlling the slightly nasal twang in Twain’s natural vocal timbre may not have been easy here, as a song like this wouldn’t really tolerate much of that, and the sibilance is very nicely judged too — bright enough to fit with the enhanced vocal highs, but never wearing on the eardrums. 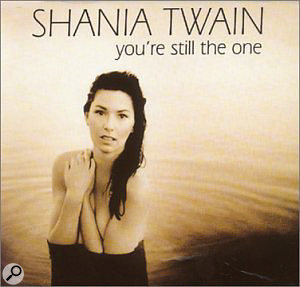 However, what really slays me about this song are the backing vocals — many of which were apparently sung by Lange himself. The idea of their preceding the main vocal entry was already an inspired production hook, but then they suspend their opening Eb-major triad, first over ‘A’ flat (as 5th, 7th and 9th) and then over ‘F’ (as 7th, 9th and 11th) before finally resolving onto the dominant Bb-major chord — it’s a lovely bit of harmonic tension that really pulls you through the phrase. The subsequent homophonic BVs are deftly handled too. The accent of the “to”/“of” gives a great lift to the rhythmic backbeat there, for example, and emphasises the falling transition into the following downbeat. I think it was also a good call that the BVs don’t join the lead until after the “you’re still the” in the next phrase. It somehow makes Shania more the centre of attention to begin with, and yet also makes me notice the backing vocals more actively when they join in — some trick!

But that’s not all. I’ve commented more than once about how the homogenising effect of layering makes it important to perform multitracked backing vocals expressively, and you can really hear Mutt Lange breaking a sweat to do this for his middle–section ‘oohs’. Notice the little portamento in the opening chord, then the aspirated ‘h’ delineating each harmony change, and finally the fall–off into the drum fill that precedes the final choruses — all of which features feel like they’ve been further pushed forward in the mix with fader automation. Whatever else you might think about Lange’s productions, you certainly can’t accuse him of corner–cutting!

Finally, many people don’t realise that this song was actually released in two different forms: the original country mix, and a later International version (which is the one we Brits are more familiar with). If you’ve not heard the International version, I’d make a point of tracking it down, because I think it’s actually better than the original, replacing the slide guitar with a thicker–sounding flute–like synth which fills out the song’s texture better overall and makes the solo section more convincing — the basic sound is still weird enough to turn the listener’s head, but the musical line makes much more sense than the rather aimless reversed–sounding slide–guitar attempt. Mike Senior