TV Music From The Inside By Dru Masters 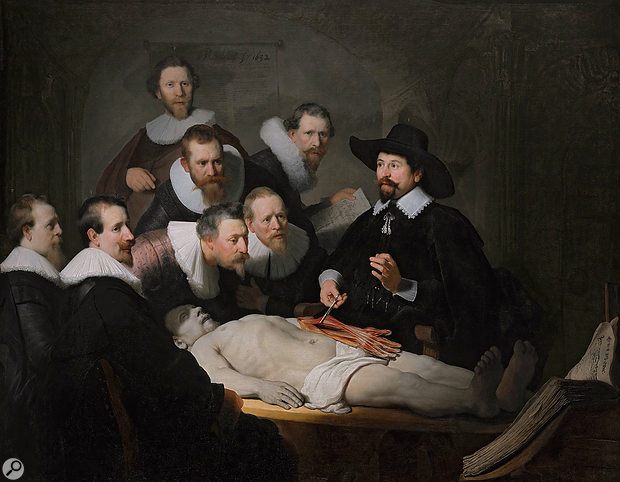 “As you can see, the muscles of his mousing arm are dangerously over-developed, and there are fragments of ukulele string embedded in the hands. Composing for the media is a dangerous trade!”

Sometimes a make-or-break opportunity can make you and break you...

It’s a million degrees in my flat, as the sun streams in through the seventh-floor windows with lovely views across the Soho rooftops. There’s no air-conditioning to calm the raging heat blasting from the Mac Pro, two PC slaves, three big screens and 5.1 Barefoot monitors, and it feels like everything’s melting. I’m writing the first cue of my first movie. I’ve nailed the theme and have a cute, driving figure happening on the mandolin and ukulele. My clients often tell me they like the way my music drives the action along (particularly in factual TV, where there’s often not much action on screen), and at some point, this became a ‘thing’ that went from a happy accident to being part of my ‘style’.

The thing about repetitive figures is they’re great, until they’re not. I’m working with a rough cut of the scene and it’s currently running at 4 minutes 35 seconds — about two minutes longer than it will end up. Four minutes of mandolin and ukulele would be enough to drive anyone mad, even if they weren’t playing the same little figure over and over again, and in the unbearable heat, even 30 seconds seems like too much.

Nothing is working. I try modulating, but it sounds cheesy. I try changing the pattern, but it feels interrupted. I try stopping it altogether, but it feels like the track has lost momentum. I simply don’t know what to do. I decide to Phone A Friend.

Samuel Sim is probably in the middle of at least three projects that are far more important than my little indie film, but he listens patiently as I try to explain that I’ve completely forgotten how to compose — in fact, I'm not sure I ever knew how to compose — then start babbling as I bury my head in my hands in an all-too-familiar mix of shame, self-loathing and despair. He probably makes some very clever suggestions, perhaps involving the octatonic or maybe Schenkerian analysis, but I’m not really listening, because I already know there’s no possible way of writing myself out of this dead end, as I have no talent and the whole cue is rubbish.

I go for a walk and a coffee. The temperature is much cooler at street level and I’m beginning to regain my composure, when the phone rings. It’s the producer of the big BBC drama series I spent the weekend pitching for. Actually, I finished my pitch on Friday, but during a family lunch on Sunday, I realised I needed to do an alternative end section, so I skipped pudding and went back into the studio. My head is spinning and I’m finding it hard to concentrate as he tells me he loves my demo and I’ve got the job. I’ve been desperate to make the jump from factual to drama, and for the last few years it seemed as if it would never happen. Suddenly I have my first movie and my first drama. By the time I get back to the studio the first episode is waiting for me and now I’m under pressure. As if that wasn’t enough, an old school friend sends over some tracks he’s been working on for a cookery series I’d asked him to help with, and they’re all bad.

I sort out the film cue in the next few hours (I leave the repetitive figure in the whole way through and it’s fine), then make a start on the drama. Around 2am I redo the cookery tracks, and at 4am I open the sofa bed and grab three hours’ sleep. I repeat this every day (taking off Saturday afternoons and Sundays to spend time with my wife and two-month-old daughter) until some time in November when, returning from the mix of episode four of the drama (most of which I sleep through, while Jake Jackson works his magic), I faint on the Underground and have to be helped off by a kindly young woman. I spend the next four days in bed, leaving just three days to write episode five.

This month’s guest column comes from film and TV composer Dru Masters, who does actually love his job. His credits include dramas Capital and Silk, Charlie Brooker’s A Touch Of Cloth, Panorama and, of course, The Apprentice. Dru has never won an award, nor even been nominated for one, but he’s not bitter.