TV Music From The Inside By Gavin Greenaway 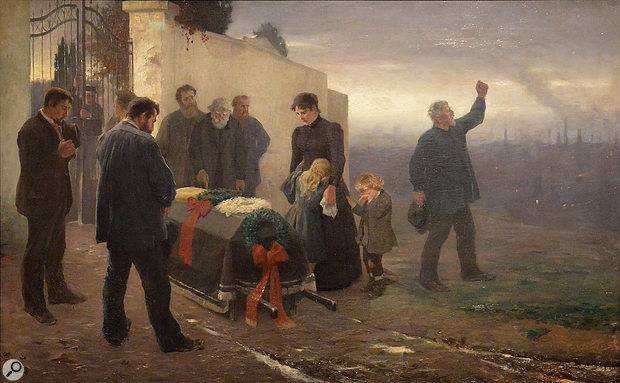 “I still haven’t quite given up hope that he might deliver the tension beds for the picture round, but perhaps we should be looking at a Plan B?”

Persistence is a virtue every composer needs, but you can take it too far.

I wake slowly from a deep sleep. I’ve been dreaming some music I can’t quite resolve, but it seems very real. As I open my eyes, a violinist friend of mine is bending over me looking very concerned. Thoughts flow in quick succession: Where am I? Who are all these people? Why does this look like a recording studio viewed from the floor in front of an orchestra?

Anyone who’s managed to make a go of the music business with tell you that among the many qualities you need, perseverance is essential. Persistence in the face of adversity; dealing with almost constant rejection and criticism; being able to pick yourself up having lost a job to a rival; powering through ‘flu to get a job done or managing the fallout from your spouse for working through yet another holiday... Stay focused, keep your destination in sight and ignore all other distractions. Keep calm and carry on.

I remember working on TV shows, composing through the night to get everything finished in time. Even though your brain and body are telling you that you must stop and rest, you ignore their protestations, and fortified with chocolate and Diet Coke (rock & roll, eh?), you press on. Never miss a dub. Always deliver.

As an example of extreme persistence, I ended up co-producing an album with Bryan Adams simply by being the person who hung around longest. I watched as other producers, writers and assistants came and went on an album of songs for Adams that were set to feature in the DreamWorks animation Spirit: Stallion Of The Cimarron. Meeting after meeting, week after week, songs were put in front of the directors and producers. A song which was working last week could be out the next. I kept presenting song demos, and eventually, three of them stuck. As the deadline approached and others were ‘let go’, I kept hanging in there, trying to be helpful and, as ‘last man standing’, co-produced the album with Bryan.

Sometimes, though, it pays to be brutally honest and admit defeat early on. It can be hard to gauge, and it means listening to subtle, and occasionally not-so-subtle signals: feelings of unease, disquiet, a hunch that things will not work out. Such as when you have a conversation with a director who thinks he’s making a suspenseful horror film, followed by one with the producer who thinks it’s actually a romance. (This was one of the few times I’ve ended up being fired from a project, as there was no way I could ever please both of them. And what a relief it was when I was finally released.)

When we’re conditioned never to give up, there’s a chance one’s judgement is permanently skewed in the wrong direction...

It’s Monday morning at Abbey Road Studio 2. I’ve been booked to conduct for an old friend, Heitor Pereira, recording for the first time in London. I’m excited to see him and keen to make sure he’s happy with the experience. But I’m not feeling too good. In fact, I feel awful. “You’re going to be sick” flashes through my thoughts. Rather than let everyone down though, I decide that I am going to tough this one out.

Half an hour into the session I pass out, dropping (I am told) like a stone and hitting my head on the music stand on the way to the floor. Much to my annoyance and embarrassment, if you do this outside of your own home, people call ambulances and cart you off to hospital. The small cut on my head is quickly seen to and I am allowed to go home later that afternoon, to continue my battle with what turns out to be norovirus. (If you’ve had norovirus you’ll know that it’s a very one-sided affair and ignominious defeat is inevitable.) The lesson, if there is one, is that sometimes it pays to listen to those quiet internal alarm bells as closely as we listen to the music we make.

Gavin Greenaway is a composer of music for TV and Film. He has conducted numerous film scores including Interstellar, The Dark Knight, Shrek, Prince Of Egypt, Iron Man, Kung Fu Panda and Tron: Legacy. His new solo album Il Falco Bianco has just been released on Tenuto Records.