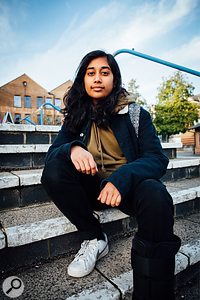 The Music Gateway Scholarship is awarded every year to a Music Production student studying at either ACM Guildford, London or Birmingham. Chosen for her talent, dedication and passion for music production, Scholarship winner Havni will now complete her Music Industry Practice Degree specialising in music production at ACM Guildford with no charge, and will graduate free from tuition fee debt.

ACM Music Production tutor, John Gallen said: “I’m thrilled that Music Gateway chose Havni as our 2018 Scholarship winner, her application was outstanding and I’m honoured that we can help her launch her career in this exciting sector of the music business.”

The recipient of one of five scholarships awarded to prospective ACM students each year, worth a total of £130,000, Havni Gohil had this to say: “It feels really strange to think that I won it but I feel extremely grateful! It will help my career so much as most people have heard of ACM and to say I've actually won the scholarship there is amazing.”

Last year marked the inaugural year for the ACM Music Gateway Scholarship which was set up to celebrate both the partnership between ACM and Music Gateway and the talent displayed at ACM. Sophie Small, Head of Operations for Music Gateway - a global online platform for creatives - said: "As a company we were so proud to be able to start giving back to ACM students and the general education sector last year with this partnership so it's equally exciting that we're in a position to continue this for a second year running. The scholarship is voted for by the entire team and it was pretty much a full house for Havni with her energy and passion really shining through. As one of the biggest employers of ACM students, we know that their dedication to creating and enhancing talent is exceptional so it's great to be a part of someone's journey in a bigger capacity and we're looking forward to seeing what she achieves and supporting further."

With close partnerships such as Europe’s largest recording facility, Metropolis Studios, and a focus on learning through doing, ACM’s offering to those looking to enter the production world is impressive.

If you have a passion for the creative industries, join ACM in its state-of-the-art facilities by learning more at an Open Day: https://www.acm.ac.uk/open-days/