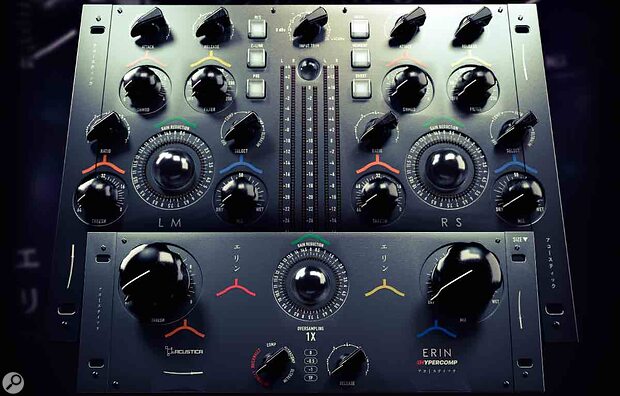 Acustica Audio have released an update for Erin, their dedicated mastering plug-in suite. Two new processors have been introduced, bringing the total count to five, along with a range of other optimisations and improvements such as scaleable GUI options.

In addition to the existing plug-ins, two new processors based on Acustica’s new Hyper compression technology have been added to Erin, in the form of Mono Hyper Comp and Stereo Hyper Comp. As the name implies, one of these compressors operates in mono whilst the second is designed for treating stereo sources.

With the company’s standard compressors, gain reduction, attack, and release curves are not calculated for every sample but for every 'n' samples, where 'n' depends on the sample rate. Acustica say that this can result in signals with fast transients not being compressed in time, with the transient “escaping” compression.

The Hyper technology allows the new processors to calculate gain reduction, attack, and release curves at each sample, with compression being applied immediately as a result. The speed of the new compressors can also be further increased by the use of oversampling, all whilst still using significantly less CPU than their predecessors.

The Erin EQ ST is a faithful emulation of an esoteric 5-band stereo parametric equaliser mainly used in mastering facilities, of which Acustica sourced and carefully sampled an immaculate unit. The EQ features five bands: high and low-shelf filters with gain and fixed Q controls, as well as three boost/cut filters with an adjustable centre frequency. Dedicated buttons allow the preamp section and each individual band to be bypassed.

Erin EQ MID is an emulation of a UK-made Pultec-style tube equaliser unit. Designed specifically for use on the mid-range, the processor focuses on frequencies from 200Hz to 5kHz. It features a limited number of selectable frequencies, which have been placed closer to each other when compared to other EQ designs, providing users with more precise control. The plug-in also offers a “colourful” modelled preamp stage, along with dedicated Mid/Side and Left/Right controls.

Erin Comp is a tube compressor and limiter emulation, once again derived from an esoteric unit manufactured in the UK. Despite being based on a mono device, the plug-in is available as a stereo processor. Behaviour around the knee of the attack and decay envelope has been optimised to help the plug-in deliver clean, transparent compression whilst aiming to minimise any effect on the sound of signals that fall below the threshold.

Each plug-in included in Erin comes in a Standard version and an alternative ZL version which operates at near-zero latency, and so is suitable for use during tracking, at the cost of extra CPU resources.

Erin is available now from the Acustica Audio website, and is currently priced at €69 until 1 November 2022, after which it will return to its full price of €179.