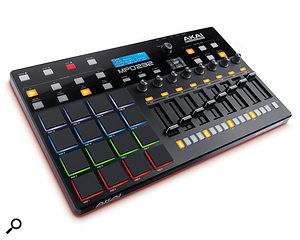 Akai Pro MPD232There are few more evocative sights, for a certain generation of sample-based music makers at least, that a four-by-four grid of grey rubber squares. Akai have been synonymous with pad-based music creation ever since the Roger Linn-designed MPC60 burst onto the scene in the late 1980s, revolutionising the world of sampling and sequencing and profoundly influencing the development of hip-hop and electronic music.

Akai’s MPD range of pad-equipped USB MIDI controllers has proved popular with a newer generation of beat makers, although they’re more likely to be found triggering clips in Ableton Live than a paltry 13 seconds of hardware sampling memory! Akai have now announced an update to the range, adding extra controls and a brand-new pad design. Akai say that their new black (not grey) Thick Fat MPC pads are more sensitive and responsive than previous generations, while the whole control scheme has been designed to promote intuitive creativity.

Akai Pro MPD226The three new MPD models directly replace the original MPD18, MPD26 and MPD32. The MPD218 feature 16 red backlit Thick Fat pads and six rotary knobs, arranged into three banks of assignments with 16 configurable control scheme presets. The MPD226 and MPD232 both feature multi-coloured backlighting on their 16 pads, four banks, 30 control presets covering most popular DAWs, dedicated transport controls and MIDI in and out jacks for controlling external hardware. However, while the MPD218 is USB bus-powered, these larger units do require a mains adaptor. The MPD226 has four assignable faders, knobs and buttons, while the MPD232 has eight of each, plus its own 64-part, 32-step sequencer to control pad events. All three new MPD units are also iOS compatible and, in a nod to the past, include classic MPC functions like Note Repeat, Swing and Full Level. A bundle of free software is also in the box, including Ableton Live Lite, Sonivox Big Bang Drums and Big Bang Cinema, and Akai’s own Software Preset Editor. The MPD218 (£69.99$199), MPD226 (£139.99$299) and MPD232 (£189.99$399) will be available this summer.