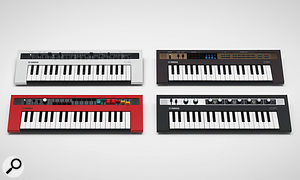 After much speculation and teasing, Yamaha have unveiled a quartet of new mini keyboards that revisit some of the greatest hits from the company’s illustrious past. Prioritising mobile music-making and hands-on physical controls, the battery-powered Reface keyboards boast three octaves of mini keys, built-in speakers and a wealth of knobs and sliders designed to deliver instant gratification from the sofa to the studio to the stage.

While fun and immediacy seem to be a big part of the package, Yamaha appear to have packed a lot of depth into these units, with multiple sound modes, effects and, in some cases, built-in looping included. A full range of physical connections, from USB, MIDI, headphone and line outs to mains adaptor power, mean that the Reface keyboards can be incorporated into serious sessions and live performances. Meanwhile, those who instantly recoil at the sight of mini keys might want to hold their ire. Yamaha say that the newly developed HQ-Mini key action featured on the Reface range and derived from the flagship Motif XF will deliver a professional-grade feel that dedicated keyboardists will appreciate.

Yamaha Reface YCReface is a contraction of “reimagined interface” and each of these compact keyboards offers a scaled-down interpretation of a classic Yamaha keyboard’s physical controls. In the case of the bright-red Reface YC, inspired by the Yamaha YC range of combo organs, that means a full complement of nine drawbar mini faders plus controls for percussion, vibrato/chorus, rotary speaker, distortion and reverb effects. Along with 128-note polyphony, the Reface YC delivers five different organ sounds covering not just the original Yamaha YC range but also tonewheel and

Yamaha Reface CPtransistor organ sounds in the style of Hammond, Vox, Farfisa and Ace-Tone. Similarly, the Reface CP is inspired by the Yamaha CP range of electric pianos but, as well as classic CP tones, this mini keyboard also supplies sounds in the style of Wurlitzer, Rhodes, Clavinet and toy pianos. Depth and rate controls for tremolo, wah, chorus and phaser effects are joined by analogue and digital delays and reverb.

Yamaha Reface CSThe other two Reface keyboards will be of particular interest to vintage synth fans. Revisiting one of the most beloved, most expressive analogue synths of all time, the Reface CS might not be full reissue of the CS80 that some are still holding out for but it does promise an accurate virtual analogue recreation of the classic sounds made famous by Vangelis, Stevie Wonder and countless others. While there’s sadly no ribbon controller evident on the Reface CS, a packed panel of physical controls should still provide plenty of opportunities for expressive playing. Five oscillator modules and four LFO types are backed up by 8-note polyphony, filter, envelope and portamento controls, a pitch bend lever and four effect types.

Yamaha Reface DXThe final member of the Reface range is the Reface DX. Inspired by the wildly popular and notoriously difficult to program Yamaha DX7, the Reface DX looks like it could actually make the DX7’s brand of FM synthesis much more accessible than the original. In place of the clunky plastic membrane buttons and tiny display that many users struggled with back in the ‘80s, the Reface DX provides a much larger screen alongside an intriguing multi-touch interface that lets you adjust up to four parameters at once with a swipe of the finger. With 8-note polyphony and 32 voice memories, the Reface DX promises a range of sounds encompassing both classic DX7 territory and more modern EDM tones.

What makes the new Reface keyboards even more interesting is the ingenious range of connectivity options that Yamaha have dreamed up for them. On the analogue side, a stereo mini-jack input means that multiple Refaces can be daisy-chained together. On the digital side, while USB MIDI allows connection to laptops and tablets in the usual manner, the Reface keyboards can also connect to iPhones to make use of a free iOS app that caters for preset management and storage. More intriguing still is their use of the brand-new Web MIDI API to allow users to upload and share presets online via Yamaha’s Soundmondo website. Other users’ presets can be loaded straight into your own Reface, with the website providing a visual representation of where the physical controls should be positioned to match the loaded patch.

It’s hard to dispute the visual appeal of these compact keyboards and it looks like Yamaha have packed more than enough creative potential into the Reface range to make the attraction more than skin deep. We’ll be bringing you a full, in-depth review as soon as possible to see how the sounds stack up. All four Reface keyboards are expected to start shipping at the beginning of September, each with a street price of $499.