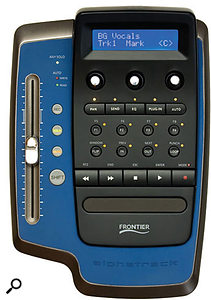 Frontier Design Group, the company behind the popular Tranzport (reviewed in SOS July 2005) have announced Alpha Track, a compact control surface for the remote control of DAW packages.

It features a single 100mm touch-sensitive, motorised fader with 10-bit resolution; three endless rotary encoders; transport control, and a touch-sensitive ribbon-controller style jog and shuttle strip. A 32-digit display shows details of the current features selected in the DAW, and there are eight user-definable buttons alongside a strip of buttons designed specifically for recalling pan, send, EQ and plug-in settings with just one touch.

Alpha Track uses USB to connect to either a PC or Mac (including Intel models) and is currently compatible with a range of popular DAW applications, including Pro Tools, Sonar, DP, Reason, Cubase and Nuendo. Support for other applications is set to follow, and Frontier say that compatibility with Logic and Ableton Live is expected soon.

Alpha Track is set to become available in January 2007. UK pricing is still to be confirmed. In the UK, Frontier Design's product range is available from Digital Village, Dolphin Music and Turnkey. Check their web sites for further details.