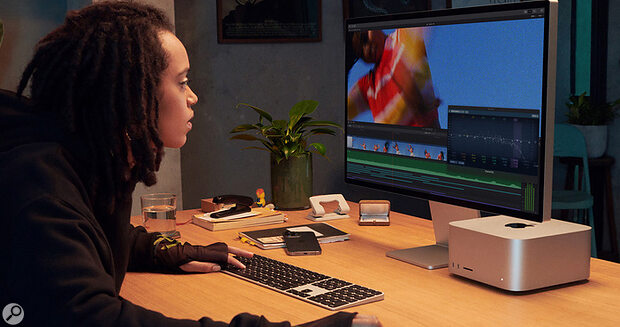 For many years, Apple's various Mac Mini computers have been a popular choice for the studio, offering a surprisingly high level of performance and a generous helping of expansion ports, but at a fraction of the cost of the company's Pro and iMac models. While the current crop of Mac Minis is more entry-level than semi-pro, Apple's newest desktop machine is aimed squarely at those folks who need maximum firepower in a small footprint and at a realistic price.

Mac Studio is the first Apple hardware to offer the top of the range new M1 Ultra processor, which is equivalent to two M1 Max chips combined, and then some! (M1 Max comes in the base Mac Studio model.)

Of particular appeal to music production enthusiasts will be the generous selection of Thunderbolt and USB ports. Both models sport the same socketry, which on the front comprises an SD card slot and pair of USB-C ports, and round the back includes four Thunderbolt 4 ports, a pair of USB 3 A-type sockets, a HDMI 2.0 output, a 10Gb Ethernet port and a stereo headphone out, which Apple say can drive almost any headphones, or feed line-level devices.

In terms of expansion, the primary difference between the Max and Ultra models is that the front-panel USB-C sockets on the Max support 10Gb/s transfer via the USB 3 protocol, while on the Ultra model they can cope with both USB 3 and 40Gb/s Thunderbolt 4 devices.

Remarkably, the new machine has the potential to outperform Apple's flagship Mac Pro computer, even with the M1 Max but especially when specified with the M1 Ultra processor — though it's only a matter of time before the Mac Pro gets its own M1 upgrade (rumoured to be around October of this year). 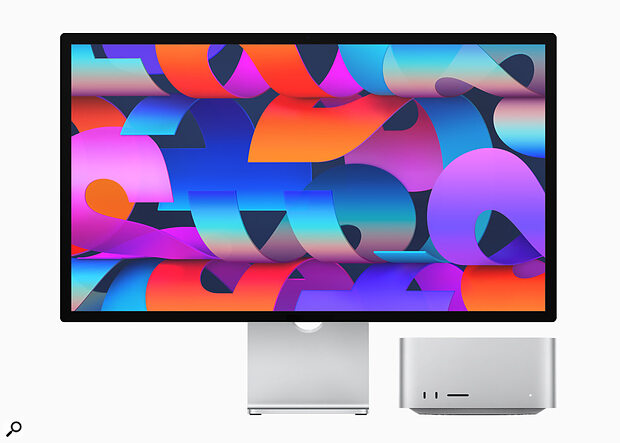 Apple's Mac Studio is available to pre-order now, and expected to ship from March 18th. For more info, including details of the also-new 5K Retina Studio Display 27-inch monitor (£1,499 GBP), check out the link below.