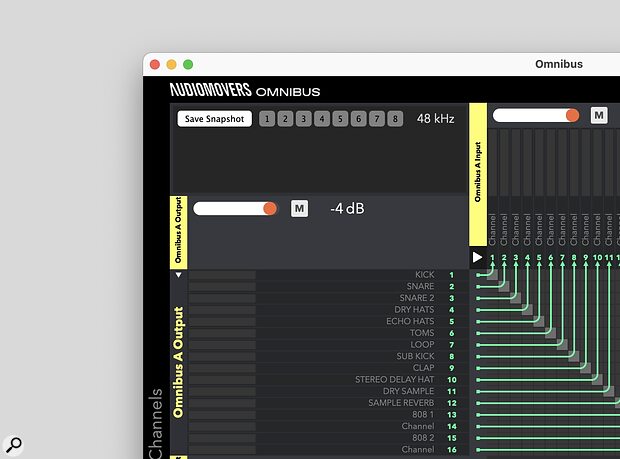 Working with multiple audio sources has previously been a problem, often requiring complicated software and hardware setups as a workaround. This is where Omnibus comes in, its intuitive user interface meaning that you can see where audio is coming from and going to on your Mac, and the ability to make new connections with a single click. Omnibus has two powerful virtual drivers with 16 channels each. These drivers allow you to easily connect audio from point A to B, where you can then record, mix, compare or, facilitated by Audiomovers’ very own Listento app, transmit it out wirelessly.

It’s the sort of innovative software where I think people will start using it in ways we don’t realise yet. Omnibus allows you to elegantly and quite simply, route any audio from within your Mac - like a virtual patch bay. Whether working on spatial audio or working on my next audio product, Omnibus gives me the control I need over my audio workflow, something which wasn’t possible before” – Mirek Stiles, Head of Audio Products, Abbey Road Studios

The manufacturer offers an example of how these systems may be combined in their press release. Audiomovers suggest that users can stream any audio on their Mac to the world with Omnibus and Listento working in tandem. Omnibus can be used to split out and send multichannel audio from any DAW to the Listento app, and both of Omnibus’ virtual drivers fully support transmission of spatial audio, be it surround, Dolby Atmos or Binaural. You can find out more about the possibilities Omnibus can open by watching this video series on the Audiomovers YouTube channel.

Omnibus is supported on Mac OS X 10.15.7 or higher, with an unlimited number of physical devices, and up to two virtual devices.

New users can buy an Omnibus licence for the one-off price of $49.99 and are invited to demo Omnibus free for seven days. Existing Listento subscribers can also get up to a 100% discount on the price.