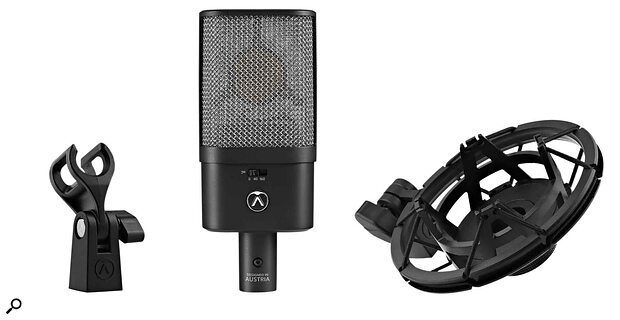 Austrian Audio have announced the release of the OC16, a cardioid large-diaphragm condenser microphone that promises to deliver high-end features and performance at an attractive price point. Built around the same patented CKR6 ceramic capsule used in the OC18 and developed using the company’s Open Acoustics Technology, Austrian Audio say the OC16 boasts a transparent and natural sound comparable to that of the OC818 and OC18 models.

The microphone has a cardioid polar pattern and features a switchable high-pass filter that can be engaged at either 40 or 160 Hz. The housing and grille are constructed from metal and although rugged, the OC16 is a compact design and weighs in at just 335g, assisting placement and precise alignment even in hard-to-reach places. The capsule is suspended at three elastic points within the body, helping to reduce interference from structure-borne noise even when used without a shockmount.

Austrian Audio say the OC16 will suit a wide variety of voices and instruments including electric and acoustic guitars, pianos, wind and string instruments, drums, vocals and more. The microphone also features a high sound pressure tolerance and is capable of withstanding SPLs of up to 148dB, allowing it to be used for the close-miking of loud sources without introducing distortion.

The OC16 comes complete with a soft case, elastic shockmount and microphone clip. It is available now, priced at $399£319 including VAT.