Baby Audio have been developing and releasing audio plug-ins since 2019, and yesterday marked the company’s third birthday. To celebrate, they have released IHNY‑2, an upgraded version of their first plug-in, I Heart NY. Offering a modern sounding, hard-hitting parallel compression which is controlled by moving a “node” within an XY display pad, IHNY‑2 promises to deliver sounds that no other plug-in can. 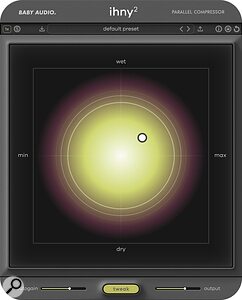 IHNY‑2's GUI allows users to control compression settings with an XY pad, whilst a 'Tweak' panel offers deeper control of the plug-in's parameters.INHY-2 splits incoming audio into two duplicates, with the parallel routing all taken care of inside of the plug-in itself. An auto-gain algorithm ensures a consistent output level as the node is moved around the XY pad, but an ‘Autogain’ slider within the GUI allows users to modify the algorithm’s behaviour should they find the results too loud or too quiet.

As the node is moved around, an AGR (Adjusted Gain Reduction) value is displayed within the GUI. This figure takes into account the current Gain Reduction and Dry/Wet balance and offers an overall value for compression intensity, and Baby Audio say that for a good starting point they recommend aiming for a displayed level between -10 and -20.

The plug-in is designed to be as fast and intuitive in use as its predecessor. For those looking for more control over their sound however, this updated version adds a ‘Tweak Panel’ which offers some new features and parameters that were not present in the original. The expected attack, release and ratio parameters are included, and a ‘Punch’ control provides a way of retaining transients which can often be lost with the heavy use of compression.

A ‘Tilt’ control makes the compressor work harder on either the low or high end of a signal, a useful feature for controlling bass-heavy material whilst treating the high end more delicately, or vice versa. Finally, a ‘Lo + High Preserve’ function offers a way to prevent any compression from being applied either above or below a user-defined cutoff point.

Take a look at the video below to see and hear IHNY‑2 in action.

Available in VST, VST3, AU and AAX formats, the plug-in is supported on PCs running Windows 7 and up, and Apple computers running macOS 10.7 and up, with native support for Apple’s M1 processors.

IHNY‑2 is available now from the SOS Music Tools, and is currently available for an introductory price of £30 excluding VAT. After 30 September 2022, the plug-in will rise to its full price of £52.50 excluding VAT. Owners of the original I Heart NY are eligible for a upgrade price, which is available via the Baby Audio website.