Bitwig have released the latest version of their Bitwig Studio DAW software. Version 4.3 introduces some new devices in the form of Convolution and Delay+, brings improvements to the software’s flagship synthesizers and adds additional sound content, including an impulse response library and a package of over 100 analogue-inspired presets for Polymer and The Grid. Support has also been added for the cutting-edge CLAP plug-in format. 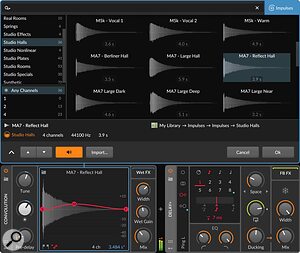 Two new devices have added in Bitwig Studio 4.3, Convolution and Delay+.Convolution comes equipped with 270 impulse responses that range from 12th-century cathedrals and studio effects to more abstract environments, which Bitwig say allows the device to offer much more than realistic reverbs. Colour and tone controls are provided, and envelopes can be drawn in to reshape the impulses. Convolution can also be used in a more experimental way, with users able to drag and drop any audio file onto the interface to be used as an impulse response.

Delay+ is Bitwig’s latest boutique audio effect, and features some interesting new controls in addition to more familiar delay parameters. A ‘Blur’ control with five different options allows everything from a lightly animated feedback through to a full, blown-out reverb, whilst a ‘Ducking’ parameter helps to keep things under control by lowering the delay level when strong signals arrive. Bitwig’s structure also allows other plug-ins to be inserted into the effect’s feedback loop.

Version 4.3 brings with it two new modules that can be used in the Polymer synthesizer and the software’s Grid environment. First up is Unison, an oscillator that blends three waveshapes into a single output. The second, Low-pass MG, is an imitation of a Moog filter and mix bus.

In addition to the new modules, some existing devices have also been treated to an upgrade. The Low-pass SK filter is now know as Sallen-Key, and features 16 different modes, whilst the Comb filter has gained a Damping control. The ASDR, AR and AD envelopes have all gained some versatility with the addition of new Analogue and Digital modes. Resonance can now be limited in Polymer by right-clicking on an empty area of any filter module, and all oscillators have gained an increased phase mod range.

Bitwig Studio 4.3 is available now for anyone with a Bitwig Studio licence and active Upgrade Plan. The updates to Polymer are also available to Bitwig Studio 16-Track customers, as are the workflow updates and CLAP support.

For more information on all of the new features, check out the Version 4.3 Release Notes.