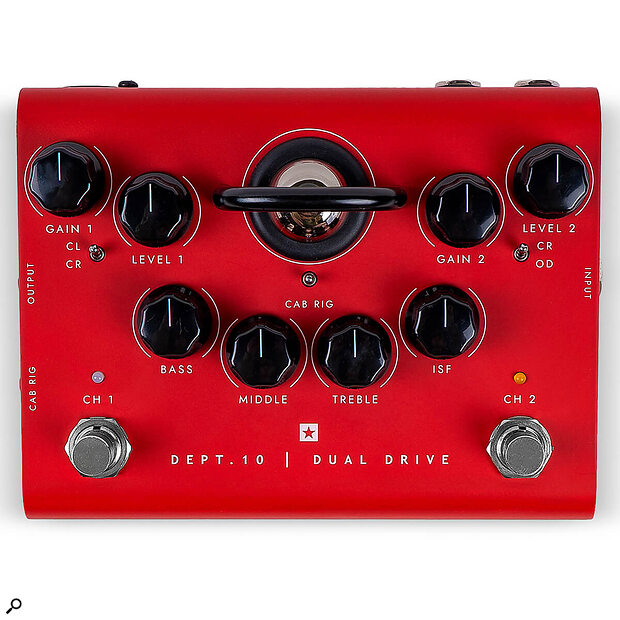 British guitar-amp and pedal brand Blackstar are no strangers to overdrive, but their new Dual Drive, released by the company's innovation and R&D Dept.10 sub-brand, is much more than just an overdrive drive pedal.

At its heart is an EEC83 valve, running at over 200V to deliver “organic tone, dynamics and break-up”. As its name suggests, it can offer two flavours of drive (selected via a pair of footswitches), and the overall tone can be adjusted via a three-band fixed EQ, plus Blackstar's proprietary 'Infinite Shape Feature' knob, which adjust the behaviour of the midrange. 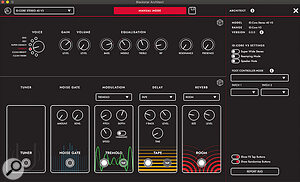 But if its heart is analogue, its brain is decidedly digital: the Dual Drive incorporates a DSP-based speaker simulator that Blackstar say reproduces the sound of a miked-up cab in “incredible detail”. Presets can be loaded up on the pedal itself, but for detailed editing the Dual Drive can communicate with a computer via USB, allowing for in-depth editing courtesy of Blackstar's Architect editor software.

Blackstar Dept.10 envisage the Dual Drive being as useful in the studio as it is on stage and in the practice room, thanks to its generous selection of outputs: balanced line-level XLR, USB, and a headphone jack. It also sports a standard unbalanced jack output for use in front of a traditional amp, and it even features an effects loop for integration with your existing pedalboards.

The Blackstar Dept.10 Dual Drive is available now, and carries an RRP of £249.

SOS Executive Editor Paul White has been playing with a Dual Drive for some time now, and was so enamoured with it that he nominated it for an SOS Gear Of The Year pick! Keep your eyes peeled for an in-depth review soon.