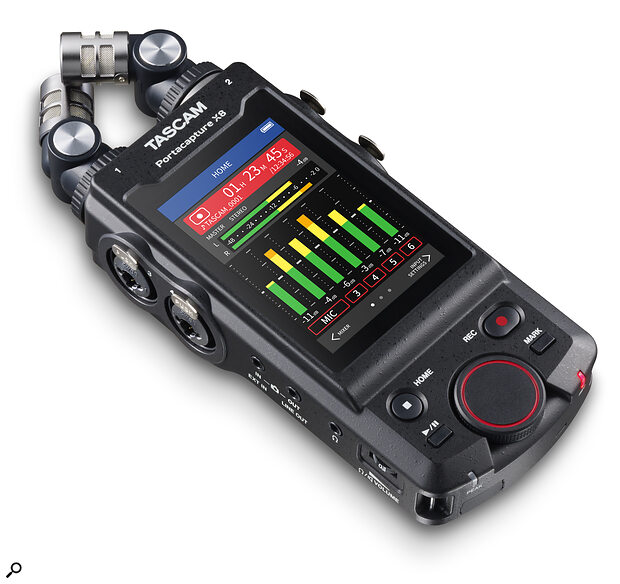 Tascam are no strangers to portable hardware recorders, and their newest model looks like it packs a punch! The Portacapture X8 can record no fewer than six discrete channels, plus a stereo mix, and sports four fully featured microphone preamps plus an integral top-mounted stereo microphone assembly.

The stereo microphones can be rotated so that they are positioned either as an X-Y (coincident) or A-B (spaced) pair, while the integral A-D converters use a pair of chips each, allowing the Portacapture X8 to record high- and low-gain signals simultaneously. The purpose of this is to practically eliminate the risk of clipping upon capture; if the high-gain A-D clips, the recorder will revert to the signal from the low-gain one to build a complete, undistorted picture.

Other socketry comprises stereo line in and out mini-jacks, intended for connection to a DSLR, plus a stereo headphone out for monitoring (there's also a built-in speaker for quick checking of test takes). Operation is via a large (3.5-inch) colour touchscreen, which allows you to set up the monitoring and record mix (to which you can add EQ, compression, limiting, reverb and more), plus a host of other features such as selecting your preferred recording formats (BWF is supported), M-S decoding, pre-record buffers and the like.

The Portacapture X8 can accept Micro SD cards up to 512GB in capacity, while power can come either from four AA batteries (alkaline, Ni-MH or Lithium), a USB power cable, or an optional AC adaptor. If you're running on external power but your mains or power supply fail, the unit will automatically continue recording on batteries if you've got them fitted. Oh, and when you're not on the move, the X8 will also function as an 8-in/2-out audio interface, via USB.

As a cost option, Tascam are also offering the AK-BT1 Bluetooth adaptor, which you can use to connect the X8 to a mobile device for remote operation.

There's no word yet on official pricing, but we'll update this story when we find out. In the mean time, to learn more about the Portacapture X8, check out the video below.