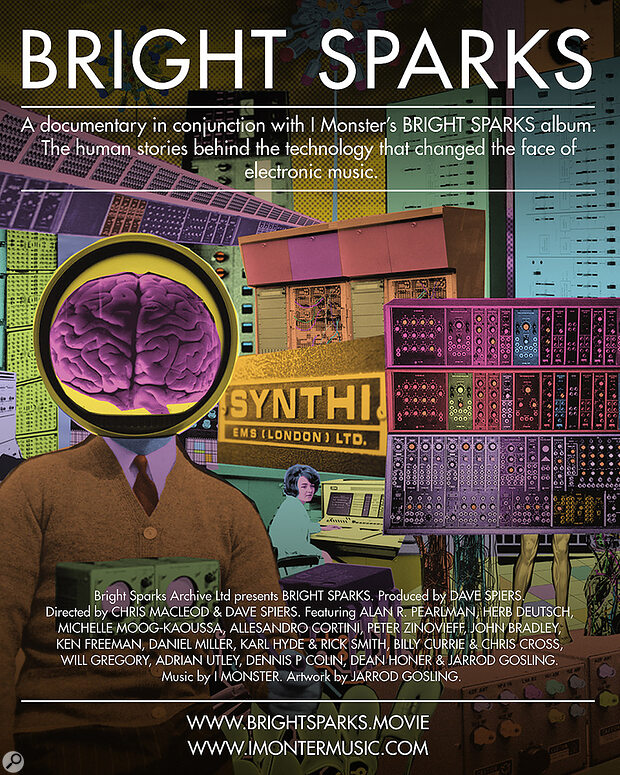 Produced in 2015, Bright Sparks is an ambitious documentary that tells the stories of eight electronic musical instrument pioneers, including such luminaries as Bob Moog, Don Buchla, Peter Zinovieff and Alan R Pearlman. Originally released as a paid-for download or Vimeo Rental video, virtual instrument veterans GForce Software have acquired the rights to it, and will be releasing it for free, in four parts, over the next two weeks.

Part 1 has just been made available, and you can watch it below. This first instalment serves as an introduction, and also provides a history lesson on the legendary Moog and ARP brands. Part 2 focuses on the lives of Bob Moog, Don Buchla, Alan R Pearlman and Harry Chamberlin, while Part 3 (subtitled 'The Brits') will feature some of the UK's most respected electronic instrument brands, like Mellotronics, EMS and ARP. Finally, Part 4 will cover the lives of Mellotronics founders the Bradley Brothers, Peter Zinovieff of EMS, Adrian Wagner (EDP) and Ken Freeman, inventor of the Freeman String Symphonizer.

Bright Sparks features contributions from I Monster’s Dean Honer and Jarrod Gosling, Will Gregory (Goldfrapp), Rick Smith & Karl Hyde (Underworld), Alessandro Cortini (Nine Inch Nails), Billy Currie & Chris Cross (Ultravox), Daniel Miller (Mute) and Adrian Utley (Portishead). About its newfound availability, the documentary's producer Dave Spiers says: “It’s great to be able to bring it into the fold and make those inspiring encounters viewable by everyone. For this new release, I’ve added stories about how the project came to be, as well as some behind the scenes anecdotes that I hope you’ll enjoy.”

Click below to watch Part 1 of Bright Sparks now. We'll be posting Part 2 on Thursday 11th February, Part 3 on Tuesday 16th, and the final Part 4 on Thursday 18th.