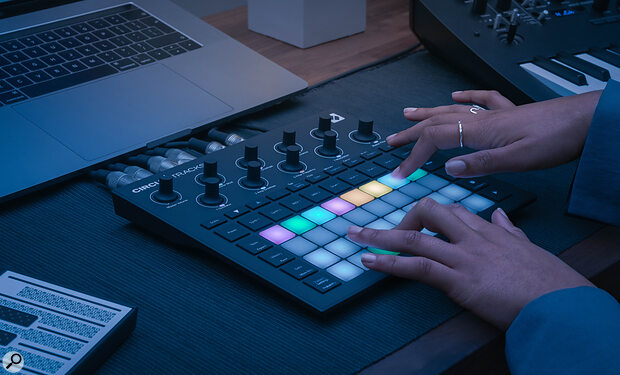 At its heart is a grid of 32 backlit, velocity-sensitive pads, which can be used for note input, step sequencing and finger drumming. The encoders across the top allow for synth and effect parameter adjustment, while the buttons surrounding the grid pad access various features like Scale View, and change the pad grid's function and layout (from step sequencer to mixer view, for example).

The two synth engines are identical, each boasting two oscillators, with a range of waveshapes and an additional noise source, a filter section (again offering a range of types and slopes), three envelopes, two LFOs, and six voices of polyphony.

The drum machine, meanwhile, is sample based, and though the unit ships with its own soundset, you can load your own custom sound too, either via SD card or using Novation's accompanying Components app and a USB connection. Components also lets you perform in-depth editing of the synth engines, back up projects, create templates, and more.

The sequencer supports patterns up to 32 steps in length, and each track can contain up to eight patterns. Patterns can be assigned to scenes, letting you create and perform full song-style arrangements, while other modern touches like probabilistic triggering, unquantised record/playback and micro-timing adjustment are also present.

The Circuit Tracks can be powered via USB, but it also sports a built-in Lithium-ion battery, which Novation reckon will provide mobile musicians with up to four hours of jamming time. It's available to buy now, and carries a price of £359 in the UK or $399 in the States.